The first session we attended Saturday was “Websites and Blogs”. One of the panelists was Greg Greene of Blue State Digital, who also writes witty, snarky front page entries on Blog for America. As he sat down behind his name plate on stage, I made one of those mental adjustments one sometimes has to make when seeing someone who had only been a name and a writing style in person for the first time. Wait a minute–he’s Black? But his last name is Greene, which would make him…Irish. Right? At least that’s what I had apparently decided on a subconscious level. And the day before, someone had told us they’d thought Demetrius was White, which I suppose makes a certain amount of sense with his Greek-sounding first name.
Actually, those are just the more obvious mental adjustments–the ones that are easier to convey in words…”I had a mental picture of X, but the person turned out to be Y”. But there are other, more subtle adjustments we had to make every time we met someone we already knew from a blog. People who had previously been a collection of words–anecdotes, opinions, jokes, etc., now had faces and voices. We had to access our mental data banks, retrieve the files associated with those people, and add this new information.

But what about the forum? Well, for me I guess it got off to kind of a rocky start when one of the panelists started off by asking for a show of hands. “How many of you consider yourselves to be beginniners when it comes to the internet?” Some hands went up. “How many of you are at an intermediate level–” (I started to raise my hand) “–for example, you can code html by hand?” My hand went back down. Wait a minute, didn’t he just skip a level? I mean, I don’t exactly consider myself a beginner. I started a few years ago doing personal web sites on Geocities, but eventually got fed up enough with the constraints and the pop-ups that I bit the bullet and taught myself a fair amount of Dreamweaver. But hand coding html? Not so much…at least not yet.

Anyway, the focus of the forum seemed to be on using web sites for organizing, fundraising, etc., so it wasn’t really aimed at people like me. I copied down some urls that could be useful in the future if we try to do any more candidate web sites, but it just wasn’t where I was right now. What I was really looking forward to was the forum on Religion, Democracy, and the Common Good, which was coming up next in the same room.

TeaTimeTim, Tigermom in NM, and Oscar were some of the familiar people we recognized in the audience at that forum. In spite of my best intentions, I still had not managed to get out to buy a voice recorder…something I’d been meaning to do for just this sort of occasion. And I knew that if I tried to take handwritten notes, I was going to be unable to read them later, so I took notes on my Sidekick. I am not anywhere near as quick and accurate on the Sidekick as I am on a full size keyboard, but I have much more usable data from the forum than I’d have if I had attempted to write out my notes on paper. What I learned at that forum really needs to be its own diary.

I recognized the name of the person who led the discussion, Glenn Smith, from his posts about Social Justice Sunday on both MyDD and Drive Democracy. I introduced myself to him after the forum. He remembered me from my comments on those diaries, and we said we’d try to get together to talk at some point during the weekend.

By the time we finally left that forum and got to the lunchtime forum with Molly Ivins and Jim Hightower, Molly was just wrapping up her part of the forum. Fortunately, we would have another chance to hear her at Stubb’s that evening.

The “Big Tent”, which was to be the location of the next few events we wanted to attend, was packed. We had bought tickets for the pizza lunch that went with this forum, so we made our way through the food line and
then tried to find a spot at the perimeter of the tent where we could hear the speakers.

Jim Hightower talked a bit about Texas politics in general, and the scoundrel that is Tom DeLay in particular. He ended on an optimistic note about the future of progressive politics. He said that he had mixed emotions about the 2004 election, and then quipped that “mixed emotions are what you feel when your daughter comes home from the prom with a Gideon bible under her arm.” He went on to say that *we* didn’t lose the election, John Kerry did, and that he’d been a pretty heavy weight for us to lift. But even so, John Kerry had gotten more votes than anyone else in the history of this country except for George Bush. He pointed out that we had a lot to be proud of, like voter registration and turnout, and organizations like Democracy for America that still are going strong after the election is over.

After the lunchtime forum, the next one up was “What It Means to Be a Progressive” also, (dang it) in the (unairconditioned) Big Tent. But since it was Charlie Grapski, we decided we wanted to hear what he had to say more than we wanted to find ourselves a cool dry place.

Fun fact–Charlie was once banned from the DNC blog because he’d posted a petition trying to get the DNC to honor its own charter with respect to primary voting. I don’t remember the exact details–perhaps someone else does–but I know that I designed this t-shirt around that time. 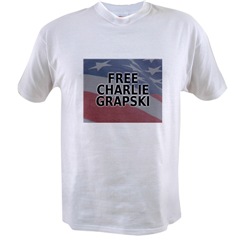 We started off sitting as close to the front as we could, so that we could try to get some decent pictures. People really were packed in pretty tight, adding to the already oppressive heat and humidity, and I seriously considered slipping out. This was just a bit much for lifelong midwesterners such as ourselves. Charlie, on the other hand, had already told us that the weather in Austin was a nice relief, in that it was the same temperature but only about half the humidity of what he endured in Florida. But we actually did manage to stay for the whole thing, just by moving a few seats back where it wasn’t so crowded.

There is a nice write-up about Charlie’s talk on Blog for America, entitled “History is on Our Side”, although it did leave out some crucial details…

What!? No mention of the woman who held up Charlie’s posters so that he could use visual aids during his presentation? Why if it weren’t for me, Charlie would have had to hold up his own darn posters. In fact…he would have been just as brilliant with or without my help.

I can certainly vouch for Donna, and attest that she served admirably, even though we failed to capture her Vanna White imitation on film. 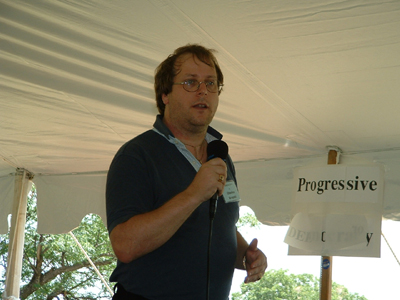 Charlie also encouraged all of us to continue the discussion we started that day over at Democracy University.

NYT: On Casey and Santorum