The mainstream media had written scantily about the testimony by Johnson, the former CIA and State Dept. intelligence analyst, and his mentor Lang, a retired colonel and intelligence expert, before the “Hearing on Security Implications of Revealing Covert Agent’s Identity” (PDF format) on july 22, 2005.

The joint Senate/House informal hearing by Democrats remains the #1 requested video at C-SPAN. C-SPAN, in response to demand, reaired the testimony three times on Friday afternoon and evening.

On Saturday morning, Johnson was interviewed by CBS Evening News but his interview was axed from the report. In an e-mail to a CBS news producer, Johnson wrote:


Our testimony yesterday on this issue before a joint committee of Senate and House Democrats has been the most widely requested piece that C-Span has had in quite a while. Yet, most of the Main Stream Media seems to be cowering in fear at following this story. Pretty sad. Who is out there speaking on behalf of Valerie Plame? Only a few of us.

Pat Lang told me earlier today this is what would happen.

I won’t be available for CBS in the future. No need to waste my time with you folks because, whether I spend time with you or not, the story gets ignored.
Larry

Crooks & Liars has the series of e-mails between Johnson and CBS news producer Carrie Rabin:

Hoping to reach you this fine Saturday. We’re doing a story for tonight’s Evening News on the latest developments in the Karl Rove/Valerie Plame case, and your testimony yesterday about what all this means for national security.

If you can give me a call back: 202-XXXXXX, I’d really appreciate it.

Thanks so much,
Carrie Rabin
Producer
CBS News

Johnson comments, “I did and they came out for an interview. I spent about a half hour with them.” Afterwards, Johnson received this e-mail from Rabin:

Thanks so much for speaking with us.

Unfortunately, our piece was cut to just a minute, and we had to kill our sound bite with you. But we’ll save the interview for the numerous other broadcasts interested in the story.

A disgusted Johnson replied in that he would no longer accept interview requests from CBS News:

Our testimony yesterday on this issue before a joint committee of Senate and House Democrats has been the most widely requested piece that C-Span has had in quite a while. Yet, most of the Main Stream Media seems to be cowering in fear at following this story. Pretty sad. Who is out there speaking on behalf of Valerie Plame? Only a few of us.

Pat Lang told me earlier today this is what would happen.

I won’t be available for CBS in the future. No need to waste my time with you folks because, whether I spend time with you or not, the story gets ignored.
Larry

It was a master stroke by the Democratic party. It gave “Oomph” to Friday’s testimony, and gave the media a political angle to the Friday testimony.

Now, a search of Google News shows close to 400 news stories on Friday’s hearing along with Johnson’s radio address.

On the car radio yesterday, I heard the top-of-the-hour radio news mention both Johnson’s radio address and the testimony. While visiting relatives, we turned on the news and noted that CNN carried the story on its bottom-of-the-screen ticker as well as reporting the story.

Friday night, I wrote a note of thanks to Larry Johnson, and mentioned that I wondered just how long it would take the rightwing blogs to start demonizing him and Pat Lang. It’d be easy for the rightwing bloggers to find their testimony, which both men have posted at Johnson’s blog, No Quarter.

So, last night and this morning, I searched the major rightwing blogs. I began at Power Line, and used its right-column list of approved blogs to search more rightwing blogs:

Some blogs had search engines. For those that didn’t, I used Google advanced Web site search.

None of the blogs has any record of Larry Johnson’s name or any mention of the testimony of the inteligence experts — or Col. Patrick Lang (Ret.) who, besides being an expert on intelligence, is a retired special forces officer, Dept. of Defense senior official and West Point professor.

Most of the blogs are posting about the “liberals” who blame Bush and Blair for the London and Egyptian bombings.

Enough that they’ll shut up about Valerie Plame being a desk jockey at the CIA? We’ll wait and see. Probably, they’ll continue to label Plame and ignore intelligence experts’ testimony.

Fox News’s Web site carries a wire story on the hearing Friday, but no story of Johnson’s radio address on Saturday.

I haven’t watched Fox News TV today, so have no idea if its pundits have discussed the testimony. Hopefully, by tomorrow, Media Matters will have tracked any comments on Fox, as Media Matters has the comments of GOP Chair Ken Mehlman and WSJ’s John Fund.


From today’s post by Larry Johnson at his blog, No Quarter:


I guess Senator Pat Roberts believes that if he repeats a lie long enough it eventually becomes true. While it is one thing for a political bag carrier like Ken Mehlman to be woefully ignorant about CIA practices and procedures, it is downright alarming that Senator Roberts can be so misinformed. Today, while appearing on CNN’s Late Edition, Roberts repeated the specious claim that Valerie Plame could not be undercover because she went to work everyday at CIA Headquarters.


Folks, there is no excuse for this level of incompetence. There are thousands of undercover CIA employees who drive through the three gates at CIA Headquarters in McLean, Virginia everyday. And this Senator from Kansas who chairs the Senate Intelligence Committee has the audacity to blame CIA for intelligence failures? How can he recognize failures when he does not even understand the very simple basics about people who work undercover at CIA. He should spend more time reading up on the CIA and less time memorizing Ken Mehlman talking points. 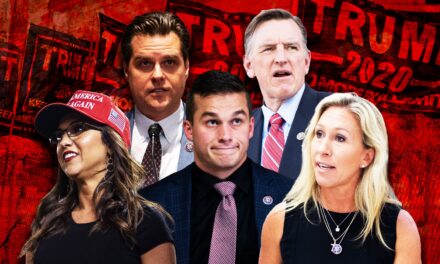 Republicans Have Become the Party of Attention-Seeking Trolls