The General certainly has an enlightened view of rape:

Mr Musharraf told the Washington Post that Pakistan should not be singled out on rape issues as other countries had the same problems.

“You must understand the environment in Pakistan … This has become a money-making concern. A lot of people say if you want to go abroad and get a visa for Canada or citizenship and be a millionaire, get yourself raped,” the Post quoted Mr Musharraf as saying.

I am sorry to point out that the reason people associate Pakistan with rape is not because rape is more popular in Karachi. It’s because of cases like this:

Mai, a 30-year-old woman who lives in the remote hamlet of Meerwala, was brutally and publicly gang-raped in June 2002 by four volunteers on the orders of a village court, or jirga. Mai’s then 12-year-old brother Abdul Shakoor (pictured behind her) had been seen walking with a girl from the more influential Mastoi tribe; they demanded Mai’s rape to avenge their “honor.” Mai’s family sat helplessly while she was dragged into a room, even as she screamed and pleaded for mercy. To further humiliate her, and make an example of those who would defy the power of local strongmen, she was paraded naked before hundreds of onlookers. Her father covered her with a shawl and walked her home. Time
Mukhtaran’s attackers, and the Mastoi of the so-called panchayat that conspired in her rape, were sentenced to death by the Dera Ghazi Khan anti-terrorist court…

…On 3 March 2005 five of the six men sentenced to death were acquitted on appeal by the Lahore High Court, the highest court of the Punjab province. link

Ms. Mai’s case is being appealed and she may still prevail. However, the plight of women in Pakistan is horrible. Ms. Mai is a courageous woman, but most women don’t even try to seek justice because of death threats, shame, and the fact the courts are as likely to acquit as they are to convict. Musharraf’s comment shows an astounding level of insensitivity.

Philly is the Vanguard

Musharraf isa brutal and duplicitous dictator foer whom the very concepts of human rights and human dignity are impossible to grasp.

It’s tragically fitting that such an abominable creature is a “close ally” of the Bush regime.

.       ~ Cross-posted from A cup of coffee in Baghdad ~ Spread Freedom and Democracy – unless you are a woman! Afghanistan stays backward, risk of being stoned to death. Iraq constitution will be primarily based on Sharia family law. Therefore the freedom gained under Saddam’s rule be be turned back for the veil and burka, no alcohol, films and theaters. Our friend and ally Musharraf, President | Dictator from Pakistan was interviewed by the WaPo :: Musharraf told the Washington Post that rape in Pakistan was a “money-making concern” with some seeing it as a ticket… Read more »

Bush makes a mockery of “freedom”, “democracy” and “human rights” every time he utters those words in connection with Iraq and Afghanistan, and with our stalwart allies in Pakistan, Egypt, Saudi Arabia, and (Kyrgistan?).

.
Uzbek troops open fire on demonstrators, many flee to Kyrgystan.
May 13, 2005 – UZBEK RIOTS or another “Orange Revolt”?

Uzbek troops shoot and kill 1,000 civilians, border with Kyrgystan closed.
Straw at odds with US over brutality of terror war ally

Dictator Karimov throws U.S. out of Uzbek military base.
U.S. Evicted From Air Base In Uzbekistan 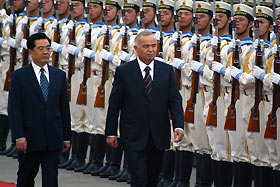 Uzbekistan, yes! I had a mental block and couldn’t think of the name. Thank you.

Oui, you posted something about this story a couple days ago, and I meant to comment.  It is truly, truly awful.

I fear such men who can only feel mighty by trying to make a woman feel small.

I can’t even begin to grasp this: Her brother walks with a girl and his sister gets gang raped for the “honor” of the girl’s family? Why didn’t they gang rape the brother? Or just beat the shit out of him? I mean, how are the dots connected in this saga? Why was she punished for his “crime”? This makes no sense at all to me. None. What is wrong with these people?! This story does not promote a global, one-world feeling, to say the least. Makes me feel like whole swathes of the planet need to be laid waste… Read more »

I had written a diary on this yesterday … then I deleted it b/c, well, I don’t know. It was too depressing. I’m glad you made note of it Boo, and Oui as well. I read three stories this past week that were related, and they fit with the theme of marginalization in SallyCat’s diary. Of treatment that would be considered questionable, of something close to a lower class. And all three concern women. They stood out because of the content, and because I had been exposed to all three of them within such a short time period (one week).… Read more »

I rather suspect that the only thing the general will learn from this outcry is, next time, to keep his mouth shut.

He doesn’t give a good goddamm shit- he is our big ally -remember? This is called realpolitik in Kissenger’s words

So our bestest friend in the middle east is a dictator who oppresses women? WHO KNEW? Well ,I did.GODDAMMIT

As if it was not enough to kill Theo Van Gogh, the filmmaker!

A local Muslim imam, Moulvi Abdul Razzaq, condemned the rape in his sermon on the Friday the following week after it occurred. He brought a local journalist, Mureed Abbas, to meet Mukhtaran’s father, and persuaded the family to file charges against the rapists.

Mukhtaran and her family went to the Jatoi police station on 30 June to file charges.

This news fact indicates the power of local “culture” and this rape not advocated by Islam.

Thank you for the information.  It is a welcome news and should be commended and publicized.  However, there are thousands of other rapes that are either unreported, or go unpunished.  These should be brought to public light and condemned morally and prosecuted legally.   Traditional Islamic law, which is still very much in force in Saudi Arabia, Pakistan, Iran, Sudan, most (if not all) of post-Taliban Afghanistan, and elsewhere, completely disregards the testimony of women in cases of a sexual nature. Aside from physical evidence, the only way to establish rape is by the testimony of four male witnesses (who,… Read more »

There was a
book by Toni Morrison which detailed the horrible mutilations that happen in Africa, Unbelievable pictures. Just awful.
What can I say– if m
en ‘own women’ then this is the way it will be.
Welcome to ‘The Handmaid’s Tale’
I am perfectly ready to thwart that shit right now.

Nope- sorry- Islam is not anywhere as brutal as Christianity– in practice—in concept – — well that is up to the enforcers isn’t it?

Christianity does not advocate rape.  It has never done it. It does not do it.

On the contrary, if you follow the Koran or the hadith or Muhammad’s biography, then its clear that
Islam advocates rape.

on the basis of either tact or social consciousness.

You can be assured that most folks in Occupied Pakistan, across the political divide, dislike Musharaf even more than you, and would like nothing better than to see both Mush and the US removed.

. PESHAWAR Jan. 27, 2005 — A tribal jirga in Sindh has decided to kill a woman doctor who was allegedly gang raped in Sui to restore the “lost honour” of her tribe, a Pakistan Medical Association (PMA) official told a press conference. PMA President Dr Umer Ayub said the husband and in-laws of the doctor had told him of the jirga or local council’s decision in Gumbat Khairpur. Dr Umer Ayub demanded the members of the jirga be arrested, and the alleged rapists of the doctor be hanged at Minar-e-Pakistan to deter such crimes. Amnesty International :: Pakistan: Fear… Read more »

This is what happens when religion — any religion that is the opiate of the masses — rejects and makes monstrous the simple biological desires of both men and women.

The resulting perversion creates Muslim men who make up the most INSANE reasons to rape women, and — here — the likes of Jimmy Swaggart and the thousands of other pervert Christian ministers, etc.