Where are the screaming headlines in the U.S. Media ::
U.N. Report based on false witness account

Husam Taher Husam, a former conscript in the Syrian army who worked for Syrian intelligence in Lebanon, alleged in a 75-minute interview on Syrian state television Sunday night, that he was bribed to accuse top Syrian officials of Hariri’s murder in his testimony to the UN commission probing the assassination.

Witness: Hariri’s son made him lie

DAMASCUS, Syria (CNN/Reuters) — A man who called himself “the main witness” in the U.N. investigation of the assassination of former Lebanese Prime Minister Rafik Hariri said his testimony was coerced by Hariri’s son and his advisors, the Syrian news agency SANA reported Monday.

The United Nations released a statement confirming that Hussam Taher Hussam had been a witness for the investigation report, authored by German prosecutor Detlev Mehlis, but said Hussam came forward voluntarily without any coercion.

“On several occasions, Mr. Hussam expressed fear … that he and his family could be harmed by Syrian security elements,” the statement said, adding that Hussam had “identified himself as a former Syrian intelligence officer in Lebanon.”

Oui, I don’t know what to make of this, to be truthful…so I turned to a source that has some credibility (Juan Cole vouches for him), and that’s the Syria Comment blog by Joshua Landis. He has a good article up there now (11-29 article):

Wading through it I found a lot of interesting comments, but here is one:

I watched the series of interviews and the press conference with Hussam Taher Hussam, which have been continuously aired on Syrian TV yesterday. They were riveting TV. Hussam was good. He is smart and articulate in a “simple” way, peppering his responses with folksy aphorisms, which lent authority and seeming wisdom to normal Syrian talk. He didn’t hesitate or look to the Syrian authorities sitting next to him for guidance in his testimony. He answered tough questions by journalists. He had clearly done his homework and was well prepared. He was also well groomed and had a youthful and energetic demeanor, which showed he had lived in Lebanon for a long time. The visual effect of seeing him answer the questions of Syrian and Lebanese journalists with spirit and confidence was powerful. Everyone here in Damascus was watching him and believing. Today, having been subject to the counter-attack from Lebanon, they are less sure.(…)

The conclusion will have to be that he is completely discredited as a witness.(…)

The most concrete evidence in Mehlis’ report, directly linking the Hariri murder to the top Syrian intelligence personnel, is now unusable.

This from a professor who is well-connected and thoroughly knowledgeable in the area of Syria.
So now what? Stay tuned (though reality has never gotten in the way of Bush’s foreign policy…)

Wake up to find out, you are the eyes of the world ~ Robert Hunter

I Too Felt Uneasy …
.
Wasn’t sure what to make of Hussam turning as a witness, especially on foreign soil in Syria with very powerful means to convince witnesses in making statements.

You added important information about the press meeting and Q&A session. Your conclusion is right, as a witness pro or con fully discredited. Mehlis has a tough job, as he UN investigation started with a delay and the evidence at the scene was not preserved by the Lebanese authorities. This fact alone should raise flags of alarm.

I place my trust in Soj’s analysis of the Hariri case! Lebanon is still a snake pit with rattlers from many different power bases, internal and external: France, United States, Israel and Syria.

Separately, Der Spiegel magazine reported that members of the BND, the domestic intelligence agency and the federal police had visited Syria in November 2002 to question Mohammed Haydar Zammar, a German citizen and associate of the Hamburg cell which led the September 11 attacks on the United States. 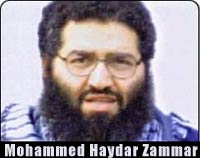 It said officials from the three agencies spent three days interviewing him after Syrian authorities had broken down his resistance in Far-Filastin prison in Damascus, where human rights groups have documented extensive evidence of torture.

Walid Moallim, the former Syrian ambassador in Washington, says that he did not “threaten” Rafik Hariri a couple of weeks before Hariri was killed. He says that he had known and “worked with” Hariri for many years and thought of him as a friend.

That could be since Rafik Hariri was variously a “friend” to Saudi Arabia, the CIA and the Baathist government in Damascus …