[From the diaries by susanhu. This is must-see television, everyone who’s seen it tells me. This weekend, Showtime is free, so you can watch it. There’s a new episode tonight. But I want to see last night’s. Anyone know the name of Friday night’s episode and when it will be reaired?] 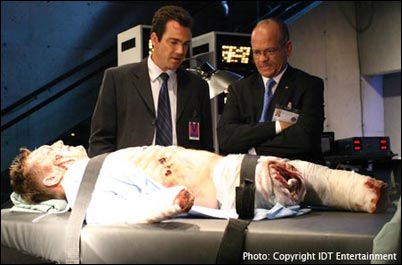 I can’t believe what I’m watching.

Homecoming, Joe Dante’s entry into Showtime’s Masters of Horror, is a black humored takedown of Bush’s criminal war, the media and the religious right. Basically, a winger advisor comes up with the bright idea that he wishes dead soldiers could come back to tell peaceniks that they died for a worthy cause.
Dead soldiers burst out of their coffins at Dover. One shows up at his polling place for early voting, casts a ballot, then drops dead again. The Republicans, arrogantly assuming that the soldiers would vote for them, make jokes about how the Democrats used to get the dead to vote in Chicago.

(live on cable news, a zombie trooper confronts the President)
Zombie Sergent: “Have you ever seen men get killed?”

Candidate: “What is it you want, um, sergent?”

We watch ministers and an Ann Coulter analogue flip flop and lie. We watch a Presidential Advisor muse about how valuable undead soldiers could be. We watch a kindly a kindly diner owner and his wife thank a zombie troop for his service.

This movie is fucking brilliant. It is both low-brow and incisive. Jokes are tossed in about Florida, bad cable news. As the reviewer in the Village Voice put it:

At once galvanic and cathartic, Dante’s film uncorks the rage that despondent progressives promptly suppressed after last year’s election and that has only recently been allowed to color mainstream coverage of presidential untruths and debacles. For all its broad, bludgeoning satire, Homecoming is deadly accurate in skewering the callousness and hypocrisy of the Bush White House and the spin industry in its orbit.

There’s even a Cindy Sheehan analogue, a part that was written before she even appeared to begin her protest. The Republicans hold her hostage to get her dead son to support them. What happens after that I’ll leave you to see for yourself.

This is well worth watching and supporting. It is a welcome stab at the quietude of the entertainment business in this country. As Fangoria notes (in a four skull review):

Yes, Dante is back in horror-satire mode, and this time he and screenwriter Sam Hamm (adapting the short story “Death and Suffrage” by Dale Bailey) are directly taking on a target that the rest of TV-drama-land and mainstream Hollywood has heretofore largely danced around. The result is as pointed, clever and blackly amusing as anything the genre has seen in ages, a perfect example of horror’s ability to address subjects too touchy to deal with in other genres. It also takes the political subtext of George A. Romero’s DEAD series and puts it right up in the forefront, without becoming preachy with its message. Dante and Hamm manage the tricky balancing act of shining a harsh light on current events without losing sight of the fact that they’re telling a horror story first and foremost.

Hamm’s script takes place in the near future, specifically 2008, when a certain Republican president is running for re-election and a war he duped the nation into fighting still rages on. The central characters are campaign consultant David Murch (Jon Tenney) and right-wing author Jane Cleaver (Thea Gill), who has written a popular book attacking the “radical left”—any resemblance to Ann Coulter is, uh, purely coincidental. After meeting on a dead-on parody of a issues-oriented talk show (Terry David Mulligan is perfect as the host), the two find themselves politically and romantically attracted—but their world is shaken up when the dead begin returning to life. Not all the deceased, mind you—just those who were killed in that particular overseas combat, and they’ve got a particular—pardon the pun—ax to grind. It’s an extrapolation of the Vietnam-era ghoul film DEATHDREAM to the nth degree—the image of the first revived corpse pushing his way out from under the Stars and Stripes that cover his casket is the most pointed and arresting image the genre has recently offered.[…]

As the film goes on and we learn more about the characters (particularly Murch), HOMECOMING’s antiwar message gains new levels of resonance, and it comes to a stirring and completely apt conclusion that perfectly ties up the assorted story threads. And even though horror fans are the species of television viewer least likely to be conservative, you don’t get a sense of preaching to the converted here; the writing and filmmaking are so sharp, even some red-staters might respond to the material. For the second year in a row, a satirical zombie project stacks up as the year’s best horror production …

If you get the chance, watch it. Share it with friends. You’ll love the ending. Pop culture protest at its best.

We Need the Evidence Against the President