WASHINGTON (New York Times) Dec. 6 — A German citizen who alleges he was abducted, beaten and taken to Afghanistan in 2003 by American agents in an apparent case of mistaken identity, filed suit in federal court today against George J. Tenet, former C.I.A. director, and three companies said to have been involved in secret flight operations.

The suit came three days after Khaled el-Masri, a 42-year-old Lebanese-born former car salesman, was refused entrance to the United States after arriving Saturday in Atlanta on a flight from Germany with the intention of appearing at a news conference today in Washington. He spoke instead by video satellite link, describing somberly how he was beaten, photographed nude and injected with drugs during five months in detention in Macedonia and Afghanistan. 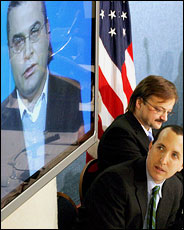 El-Masri was born in Kuwait to Lebanese parents and moved to Germany in 1985. El-Masri is married and father of five, on New Year’s Eve 2003 he boarded a bus in his hometown of Neu-Ulm in Germany for a holiday across the border in Macedonia. At the border El-Masri was stopped by Macedonian authorities, and his passport was confiscated.

He was detained by local authorities for 23 days and then handed over to what he believes was a team of CIA operatives, and flown to Afghanistan where he was subjected to abuse during four months in captivity.

In late May 2004 put on a plane back to Europe and was left in Albania on a hillside.

NEW YORK (CBS) March 6, 2005 — Two Egyptians living in Sweden, Mohammad Al-Zery and Ahmed Agiza, were arrested by Swedish police and brought to an airport. An executive jet was waiting with a crew of mysterious masked men.

“America security agents just took over,” says Tomas Hammarberg, a former Swedish diplomat who pressed for and got an investigation into how the Egyptians disappeared.

“We know that they were badly treated on the spot, that scissors and knives were used to take off their clothes. And they were shackled. And some tranquilizers were put in the back of them, obviously in order to make them dizzy and fall asleep.”

An airport officer told 60 Minutes she saw the two men hustled to the plane. She didn’t want to be identified, but she had no doubt about where the plane came from: “I know that the aircraft was American registration … because the ‘N’ first, on the registration.”

The so-called “N” number marks an American plane. Swedish records show a Gulfstream G5, N379P was there that night. Within hours, Al-Zery and Agiza, both of whom had been seeking asylum in Sweden, found themselves in an Egyptian prison. Hammarberg says Sweden sent a diplomat to see them weeks later. 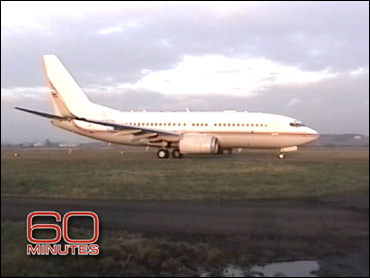 60 Minutes has videotaped a secret jet the CIA
is said to be using to deliver terror suspects to countries
known for torturing people. Source CBS

What did they tell the diplomat about how they were being treated?

“That they had been treated brutally in general, had been beaten up several times, that they had been threatened,” says Hammarberg. “But probably the worst phase of torture came after that first visit by the ambassador. … They were under electric torture.”

The Egyptians say Agiza is an Islamic militant and they sentenced him to 25 years. But Al-Zery wasn’t charged. After two years in jail, he was sent to his village in Egypt. The authorities are not allowing interviews.

“The option of not doing something is extraordinarily dangerous to the American people,” says Michael Scheuer, who was a senior CIA official in the counterterrorist center. Scheuer created the CIA’s Osama bin Laden unit and helped set up the rendition program during the Clinton administration. “Basically, the National Security Council gave us the mission, take down these cells, dismantle them and take people off the streets so they can’t kill Americans,” says Scheuer. “They just didn’t give us anywhere to take the people we captured.”

So the CIA started taking suspects to Egypt and Jordan. Scheuer says renditions were authorized by Clinton’s National Security Council and officials in Congress, and all understood what it meant to send suspects to those countries.

But doesn’t that make the United States complicit in the torture?

“You’ll have to ask the lawyers,” says Scheuer.

Secretary of State Condoleezza Rice upon her departure to Europe —

“Good morning. We have received inquiries from the European Union, the Council of Europe, and from several individual countries about media reports concerning U.S. conduct in the war on terror. I am going to respond now to those inquiries, as I depart today for Europe. And this will also essentially form the text of the letter that I will send to Secretary Straw, who wrote on behalf of the European Union as the European Union President.”

The captured terrorists of the 21st century do not fit easily into traditional systems of criminal or military justice, which were designed for different needs. We have to adapt. Other governments are now also facing this challenge.

SKOPJE (BBC News) March 20, 2002 — When Macedonian police shot dead seven men earlier this month it was claimed a new front had opened up in the war on terrorism. The men, supposedly of Pakistani origin, were killed in a gun battle just to the north of the capital Skopje, according the Macedonian Interior Ministry.

Their mission, said the Interior Minister Ljube Boskovsi, was to target the US, British and German embassies in the country. “They were aiming at terrorist acts against the most noteworthy embassies in this country, as well as towards people at the top of the government”, said Mr Boskovski.

“We knew that there was a large terrorist group in town. And that’s why we increased the patrols on the terrain”.

SKOPJE (BBC News) April 22, 2005 — The prosecution had alleged the killings of six Pakistanis and an Indian in 2002, were ordered by former Interior Minister Ljube Boskovski. Mr Boskovski, due to face unrelated war crimes charges at the UN’s Hague tribunal, was charged over allegedly committing war crimes during the 2001 conflict between the Macedonian government and ethnic Albanian rebels.

A court in Macedonia has acquitted four men accused of murdering seven South Asian migrants and making it look as if they were members of an al-Qaeda cell.

The presiding judge said there was insufficient evidence against the men, three of whom are former policemen.

By the numbers — this week’s economic tea leaves