Bush and his Soul Brother 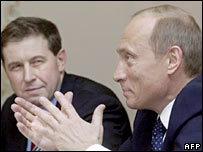 It looks like Vladamir Putin is showing us again just why he truly is Bush’s Soul Bro. The main critic within his administration is being silenced now that he has been sidelined within the government. From the BBC

An outspoken aide to Russian President Vladimir Putin has offered his resignation in protest against changes in government policy. Economic adviser Andrei Illarionov said Russia was no longer politically free but run by state corporations acting in their own interests.

“It is one thing to work in a country that is partly free. It is another thing when the political system has changed, and the country has stopped being free and democratic,” Mr Illarionov told reporters in Moscow.

He also said: “Until not long ago no-one put any limits on me expressing my point of view. Now the situation has changed.”
Mr Illarionov has recently criticised government economic policy with such gusto that he sounded more like the Kremlin’s arch opponent than its employee, the BBC’s Steve Rosenberg in Moscow says. A year ago, he condemned the Russian authorities attack on the giant Yukos as the swindle of the year, our correspondent says. The Kremlin took away some of his duties, like his role as Russia’s representative to the G8, sidelining the respected economist.

It looks like government in either country is exclusively for toadies. Add to the mix that both of these regimes will do anything to stay in power and you have a very scary duo. Add China to the mix and the triumvirate is complete. It is way past time to show our leaders they are our public servants, not the other way around.