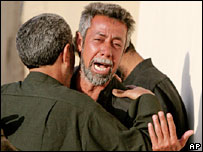 What ever one feels about the war in Iraq there is a statistic that saddens the soul and that is the one of the soldier who chooses to end his/her life before their time. It’s a disgrace because all of those who have their eyes and ears open should be able to stop it, just like all of us in the civilian sector are on the lookout for our loved ones who are living with the water level up to their chins. A Piece to look at:

The number of U.S. Army soldiers who took their own lives increased last year to the highest total since 1993, despite a growing effort by the Army to detect and prevent suicides.

In 2005, a total of 83 soldiers committed suicide, compared with 67 in 2004, and 60 in 2003 – the year U.S.-led forces invaded Iraq. Four other deaths in 2005 are being investigated as possible suicides but have not yet been confirmed. The totals include active duty Army soldiers and deployed National Guard and Reserve troops.”Although we are not alarmed by the slight increase, we do take suicide prevention very seriously,” said Army spokesman Col. Joseph Curtin.

“We have increased the number of combat stress teams, increased suicide prevention and training, and we are working very aggressively to change the culture so that soldiers feel comfortable coming forward with their personal problems in a culture where historically admitting mental health issues was frowned upon,” Curtin said. Of the confirmed suicides last year, 25 were soldiers deployed to the Iraq and Afghanistan wars – which amounts to 40 percent of the 64 suicides by Army soldiers in Iraq since the conflict began in March 2003.

When suicides among soldiers in Iraq spiked in the summer of 2003, the Army put together a mental health assessment team that met with troops. Investigators found common threads in the circumstances of the soldiers who committed suicide – including personal financial problems, failed personal relationships and legal problems.

Since then, the Army has increased the number of mental health professionals and placed combat stress teams with units. According to the Army, there are more than 230 mental health practitioners working in Iraq and Afghanistan, compared with “about a handful” when the war began, Curtin said. Soldiers also get cards and booklets that outline suicide warning signs and how to get help. But at least one veterans group says it’s not enough.

Obviously those soldiers are right if the number of suicides is escalating.

“These numbers should be a wake-up call on the mental health impact of this war,” said Paul Rieckhoff, executive director of the Iraq and Afghanistan Veterans of America. “One in three soldiers will come back with post traumatic stress disorder or comparable mental health issues, or depression and severe anxiety.” Rieckhoff, who was a platoon leader in Iraq, said solders there face increased stress because they are often deployed to the warfront several times, they are fighting urban combat and their enemy blends in with the population, making it more difficult to tell friend from foe.

“You don’t get much time to rest and with the increased insurgency, your chances of getting killed or wounded are growing,” he said. “The Army is trying harder, but they’ve got an incredibly long way to go.” He added that while there are more psychiatrists, the soldiers are still in a war zone, “so you’re just putting your finger in the dam.”

One in three come back with PTSD, many don’t come back because they are killed or commit suicide. Who knows what diseases they may come home with either after Agent Orange and Gulf War Syndrome afflicted their fellow soldiers in Vietnam and Kuwait. If only the government and VA system were their staunchest advocates but too often in the past they have been a large beaurocracy for these poor men and women to scale when what they need is an open set of arms.

Thanks for posting this. Don’t know what to say. It would be bad enough in a normal war. But this isn’t a normal war. It wasn’t necessary, it was started on false pretenses. Sick.

When I read this at first I was dumbstruck and then just angry and sad too.

There is so little written about this, probably because there is shame associated with it. The shame is useless because there is nothing to be ashamed about, it’s much better to speak about it and try and do something about it.

I can hardly read things like this without my heart breaking more and more.  I have been there and I can tellyou when someone feels like these ppl do, it is hard to shuck off.  That is why it is so important for others around them to be so aware or the red flags coming up.  Thanks for your diary.  hugs

I can’t even finish reading this one.  How the hell do you manage to write about it and stay sane?

Who said I was sane 🙂

I don’t know, maybe just a strong sense of compassion, one I was raised with. I’d always rather swim in the deep end than the shallow. How ever did I live in LA so long!

The way that I was raised.  My dad’s influence–Mom thinks I’m nuts.

I write about Medicare D(isaster) because I feel that I have to, in order to make a difference, so that things will change. (Some have said, I don’t know how you do it.  But, I do.)

Is that why you write?

it’s more about a 5 pronged attack against those who would screw with my rights: vote, volunteer, protest, donate and blog.

i’m gay and there is no shortage of ignorant people trying to pass laws against me just because of who i fall in love with. the other political stuff just extends from that.