Where are the Democrats?

I’m having a difficult time understanding the Democrats lack of ability to focus. They were coming out slamming Republican lies and deception for a couple of weeks. They went on TV, wrote op ed pieces and posted on blogs when no one else would give them a platform.
We heard more than a few statements from Dem leaders saying they were not going to let Republicans win on security and they backed those statements with attacks. Kerry, Kennedy, Dean, Clinton et al came out very forcefully countering stupid Bush, Cheney, Rice, et al statements about how Democrats were weak on security. I gave them props for this.

Now, every single day I hear Cheney, Republicans and Right wing blogs are all talking about how Dems are weak on terror. They keep saying it day after day after day. Democrats spend a couple of pretty good days and then start acting like they’re out of breath.

Today we had the ruling from U.S. District Judge Anna Diggs Taylor which struck down the NSA program. It’s illegal. Stop and desist from any further activity in relation to this program.

Republicans and Right wing blogs are all over it at  Redstate.org. It’s front page stuff and they’re all missing the point – spying is okay. We want them to spy and we want them to use every tool they have to fight terrorism. We just want them to do it legally. See how easy that is to counter every argument the Right is making.

Why aren’t Dems saying this? Is it because it’s so obvious that it’s not interesting to fight now? Well, it may be obvious to us but there are 30%-35% of Americans who vote who suck down the kind of shit Republicans have been handing them. We need Democrats. We need blog leaders to speak out and attack. 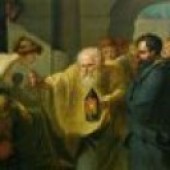 they have for a long time been useless at running a coordinated attack for a period of time. I’m not sure on the blogs actually. They seem to be trying to attack in between doing candidate support stuff  but the truth is the blogs dont actually carry much weight. One analysis of the repub and Dem blogs is the repub blogs do the news and attacks well but dont get into candidates and fighting to in. They leave that to their party, which to be honest is pretty good at winning. The Dem blogs do a lot of candidate and… Read more »

You make a good point about blogs but I think if we were talking about it more visibly then it would get some media and maybe tickle the Dem leaders to say something.

I think it needs to be attacked. At least the accusation that the ruling is playing into terrorist hands. This is the Right wing all day for the past several days. Dems need to attack it when the opportunity presents itself and today gave them that opportunity with the NSA ruling.

to run a poll before they say anything on anything;)

They are like Phil the ground hog who only comes out of his hole on Feb 2 every year.

Just when you start to think they’ve finally got it and that they are going to stand up and fight. . . poof, they disappear again.

I sure can’t figure them.  And as invested as I am in this political stuff, I can easily see why mainstream voters can’t figure out what Dems are about.