Interesting article by Seth Gitell in the N.Y. Sun this morning. The way the Senate maybe setting up, it well could be a 50-50 tie. I know it’s a long shot, but if it should ever come to that, one person could be instrumental in seeing that Bush’s agenda either passes or fails, and that Senator maybe Joe Lieberman.

That’s right, the man most liberals want to get rid of, simply on the basis of one vote, could be the difference in what happens with Bush’s agenda for the next two years.

If Lieberman survives Lamont’s challenge, and if everything goes the Democrats way, Democrats may have no choice but to court Lieberman on a variety of issues, including the war on terror, Iraq, and the domestic agenda.

I know it’s going to make most of you in here sick, but what if you had to rely on Joe Lieberman to get something passed?? Interesting, very interesting.

SGRENA-NYT Whitewashes the Italian Report on the US Whitewash

It’s worse than that.  Lieberman make actually jump ship and vote for a Republican majority leader even if the Dems get 51-49 lead.

Atrios wanted me to bet $10 bucks that he would.  I didn’t take him up on the bet even though I don’t think Joe will do that.

But he might, which is another reason to vote for Lamont.

Lieberman is not jumping ship. He has said it a million times. He will caucus with Democrats.

many people do not believe him.

I think he will probably caucus with the Dems, but I am not so sure.

He has taken millions from Rove for this election.  Why?

Running as an independent, he’s free to take money from whoever wants to throw it at him. I would too.

get your talking points straight.

He took the money during the primary.

What are you, some kinda troll or sommat?

Yes, this diarist is a LieberTroll – spews invectives and gives no meaningful responses to any comments.  This diarist loves violent imagery and is a Republican neocon troll hired to post unsubstantiated drivel here.

For The Truth About Joe, go here.

Why is it that both parties are so intent on screaming at each other, rather than trying to find solutions to this country’s massive problems??

I have in my life read many ignorant obtuse and thoroughly stupid comments.

This ranks right up there.

Do you know what an election involves?

Umm, didn’t you get the message yet?  We’re supposed to join hands with the neocons and sing kum-ba-ya while they steal our freedoms and siphon trillions of our dollars out of the treasury and into the clutches of their cronies.

This ranks right up there.

Indeed. What to know something funny? It paraphrases exactly the ‘message’ of the piece of crap Insurance CEO running against Cantwell (!) here in Wa state. If one watches TV they hear this insult to the citizenry’s intelligence several times  an friggin hour. oh boy.

Lieberman will also not vote for a Republican majority.

I don’t care when he took it. I hope he continues taking all the money thrown his way.

Why is it that some people are so ignorant of the true nature of the political parties that they have to repeat the same idiotic comment, over and over and over again?

“A good kisser and very bendy.”

so let me ask you:

you say you are a moderate.  What are your positions on school vouchers, affirmative action, abortion rights, access to Plan B and contraceptives at pharmacies, assisted suicide, and the death penalty?

How do your views line up with each party? Too funny!  Can I steal this image?

It’s a regular at BartCop.com  Bartcop’s got a beef with each one of these ‘fightin dems’. 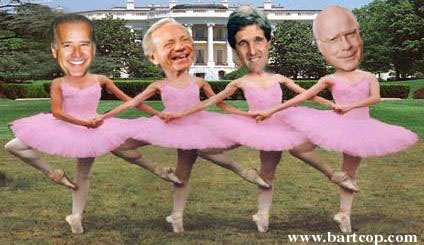 Does anybody have a good recipe for brisket?

Yummy. Can’t wait to try it!

Ooh, good. I bought a brisket at the farmers’ market and really didn’t know how to fix it.  Thanks.

Damn I’m hungry. That looks soooooo good. I swear somebody messed with the clocks here at work and time is crawling.

Here’s the easy version: Marinate the brisket in Italian salad dressing overnight Shove it in the crock pot at 8 in the morning At 6 at night start chopping up tomatoes, onions, lettuce, and peppers and setting out the sour cream, salsa, cheese and other condiments At 7:30 start heating up the tortillas on a skillet. While that’s going on, drain the brisket. By this time you should be able to pull the brisket apart into strands. Presto! Not exactly fajitas (which are made with skirt steak), but we call them fajitas anyway and unless you’re inviting Man Eegee to… Read more »

Given his history, umm, I wouldn’t care to rely on Joe.  Mmm, brisket.

Dammit I was already hungry b/c someone in one of the offices is burning a candle that smells like freshly baked gingerbread.

That’s it. I’m logging off and finding something to munch on.

This is getting more and more boring. But hey, I always get some new recipes out of it. Thanks folks!! Have a great weekend.

You referenced the NY Sun, a known right-wing rag.