RIYADH (Reuters) Dec. 02, 2006 – BAE Systems (BA.L) is optimistic about the future of its business with Saudi Arabia, a senior manager said, despite reports that the key customer had suspended talks over a multi-billion-pound arms deal. 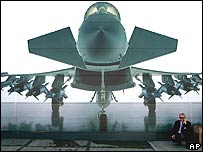 Damien Turner, Managing Director of BAE Systems Middle East, declined to comment directly on reports by British newspapers that Saudi Arabia had given Britain 10 days to halt a fraud probe or lose a contract for 72 Eurofighter Typhoon combat jets. Turner was speaking to reporters after an upbeat address on the firm’s plans in the kingdom at a conference attended by Crown Prince and Defense Minister Prince Sultan.

Britain said it would not seek to intervene in the two-year investigation by the Serious Fraud Office (SFO) into suspected accounting irregularities related to BAE.

The Daily Telegraph had reported that Riyadh had given London 10 days to halt the SFO inquiry or lose the contract for the Typhoons being jointly developed by BAE Systems, Europe’s largest defense firm.

BAE Chief Executive Mike Turner was quoted in the Financial Times earlier as saying talks about the sale of the Typhoons to Saudi Arabia had stalled amid the widening probe into BAE.

SFO initially focused its probe on the relationship between BAE and two small travel firms which made arrangements for Saudi Arabian officials on behalf of BAE. However, a report earlier this week in The Guardian newspaper said the probe was looking into whether BAE money was channeled to members of the Saudi ruling family.

Lord Goldsmith consulted the prime minister, the defence secretary, foreign secretary, and the intelligence services, and they decided that “the wider public interest” “outweighed the need to maintain the rule of law”. Mr Blair said it would be bad for Britain’s security if the SFO was allowed to go ahead, according to the statement made in the Lords by Lord Goldsmith. The statement did not elaborate on the nature of the threat.

The Guardian (Sept. 27, 2005) — Tony Blair and John Reid, the defence secretary, have been holding secret talks with Saudi Arabia in pursuit of a huge arms deal worth up to £40bn, according to diplomatic sources.

Mr Blair went to Riyadh on 2 July 2005, en route to Singapore, where Britain was bidding for the 2012 Olympics. Three weeks later, Mr Reid made a two-day visit, when he sought to persuade Prince Sultan, the crown prince, to re-equip his air force with the Typhoon, the European fighter plane of which the British arms company BAE has the lion’s share of manufacturing.

Defence, diplomatic and legal sources say negotiations are stalling because the Saudis are demanding three favours. These are that Britain should expel two anti-Saudi dissidents, Saad al-Faqih and Mohammed al-Masari; that British Airways should resume flights to Riyadh, currently cancelled through terrorism fears; and that a corruption investigation implicating the Saudi ruling family and BAE should be dropped. Crown prince Sultan’s son-in-law, Prince Turki bin Nasr, is at the centre of a “slush fund” investigation by the Serious Fraud Office.

Asia Times (Oct. 6, 2005) — According to political economist Joe Roeber the arms industry is the most corrupt legal sector of the economy. In the late 1990s the CIA is reported to have estimated that the arms trade accounted for 40-45% of the total corruption in world trade despite only amounting to less than half a percent of the total.

Bush? Wiretaps? You think this is NEWS???

Do you remember 25 years ago?