WASHINGTON D.C. (IHT) April 12 – Paul Wolfowitz’s tenure as president of the World Bank was thrown into turmoil by the disclosure that he had helped arrange a pay raise for his companion at the time of her transfer from the bank to the State Department, where she remained on the bank payroll.

In a chaotic day of revelations and meetings at a normally staid institution, Wolfowitz apologized for his role in the raise and transfer of Shaha Riza, his companion, to a few hundred staff members assembled in the bank building atrium, only to be greeted by booing, catcalls and cries for his resignation.

Earlier, the bank’s staff association had declared that it was “impossible for the institution to move forward with any sense of purpose under the present leadership.” The association had helped spearhead an investigation into Riza’s transfer and raise, details of which came into the open in the last 24 hours. 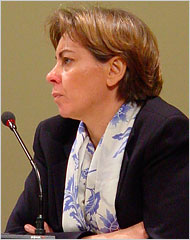 Shaha Riza, shown in 2003, is
still on the World Bank payroll.

(Wikipedia) Wolfowitz personally directed that she should be promoted to management just before leaving (receiving a substantial pay raise) and that she has to have further salary increases at rates above the rate ceiling in the Bank. This raised Riza’s salary from $132,660 to $193,590 per year, tax-exempt.

She is presently working for Dick Cheney’s daughter, Liz Cheney, in the State Department.

(WaPo – columnist Al Kamen) April 9 – Meanwhile, the March issue of Vanity Fair, in an article about huge defense contractor SAIC, says that, in the run-up to the Iraq invasion in 2003, SAIC’s “subject-matter experts . . . were expected to lend a hand” to the Pentagon on various matters, such as “business development, . . . the role of women in government, and government reform.”

“Among SAIC’s subject-matter experts,” the article says, “was Shaha Riza, an Arab feminist and communications adviser at the World Bank. Riza also happened to be the girlfriend of Paul Wolfowitz, the deputy secretary of defense.”

Unless she got bank permission to do this outside work, that would be a violation of bank rules, according to the Government Accountability Project’s international director, Bea Edwards.

A State Department spokesman said that Riza is now working at an “international non-government organization,” the Foundation for the Future, which was established by the United States and a group of European, Middle Eastern and North African governments.

A Special Place in Hell

I’m going to watch where Wolfie lands next and I am going to sell short on that company.

Tax Exempt?  You mean if you work for WB your salary is tax exempt? WTF? Oh yeah and she sounds like a real ‘feminist’ to me alright..this whole thing is just another circular incestuous clusterfuck with the same old people it seems…getting richer with every little evil scheme they manage to pull off.

This is so blatant it blows me away. He’s got an  office full of incompetent Bushies. He sets his girlfriend up every where he works.  All out in the open. He’s out of control. I think Wolfowitz could use some more scrutiny here. Bet there is a lot more crap in this guys life, he doesn’t make sound decisions. His ethics are be a bit different from yours or mine.

this is rich in irony…

“I have now been victimized for agreeing to an arrangement that I have objected to and that I did not believe from the outset was in my best interest,”

just another day in BushWorld…we’re all

Doesn’t everyone feel like a victim when they receive a $60,000 raise?  When I get one someday, I’ll let ya know

Hi Manny, yeah cry me a river for someone getting paid apparently from 2 places(one tax exempt!)…and her job at the State Dept…was questionable at best anyway, no one seems to know exactly what her job title was…if she was so sure this wasn’t on the up/up then why didn’t she look for another job?…I’m sure with her  gold star connections she could have been given some other made up job that might not be so controversial and of course assuage her feelings of victimhood. And of course it’s no surprise the WH is standing by Wolfie as someone with… Read more »

Hi chocolate,
I don’t think she was paid from two places.  She remained on WB payroll while seconded to the State Dept.  The State Dept did not pay her.
It’s fun, nonetheless, to watch the squirming.  WH support does not carry the weight it did in 2005 when he was appointed – I think he’ll be gone pretty soon.  And what a pathetic excuse she makes.

Hi ask, Well that’s the only bit of good news…I just somehow got the impression she was paid twice…of course once is bad enough given all the circumstances.

Thanks dada,
That is just hilarious – I followed the link.

Wow, I saw this this morning in the NY Times and it made my day.  Wolfowitz was one of the sleaziest figures in the Bush administation, and now he might be on the way out.

But Shaha Riza seems like an interesting figure.  I looked her up on Wikipedia.  She has a Libyan father and a Syrian/Saudi father.  So is she a Muslim?

Heart of the Rockies

Michael Moore pegged him perfectly with the “spit on his comb” vignette.  Sheer genius.

actions in the modern western world? Or do we now live a in world where their is no longer accountability?

. Wolfowitz Sends His Gal to State Dept. — To Work With Cheney’s Daughter Village Voice Sept. 22, 2005 – Shaha Ali Riza, lately in the news as World Bank President Paul Wolfowitz‘s Saudi-born girlfriend, has been assigned to the U.S. State Department. The move, which has not been announced by either huge agency controlled by the Bush regime, means that she’ll be working with Dick Cheneys daughter Liz Cheney, a top official in the key Near East Affairs bureau. That’s the word from one of my moles in the World Bank. This significant assignment — a hardened link between… Read more »