Last night was a special night for Edwards’ supporters and for people who wanted to learn more about the campaign.  Across the nation people gathered in homes, restaurants, bars and meeting rooms to discuss the campaign, why they were supporting John Edwards, ask questions about issues and share ideas.  I attended a meeting in Austin, Texas with 15 people who were all avid supporters and really did not have a lot of questions but the reasons we were all supporting John Edwards were different yet similar.   I will share some of the stories and reason with and apologize since I do not remember all of the people’s names and did not write them down.

cross posted at Booman Tribune, refinish69, Texas Kaos,GLBT Democrats For Edwards, Daily Kos
Steve Garcia spoke of teaching in South San Antonio and finding out one of his students, who was not performing at his best, was having problems because he was homeless and living under a bridge but still attending school every day.  Steve is supporting John Edwards because he is the only candidate who is speaking out about poverty in the United States and wants to make a difference.

A woman spoke of losing her husband to cancer and how Sen. Edwards call for universal health care for all Americans spoke to her.  Another woman shared the fact that she has under gone treatment for cancer and that one shot had cost 1,600 dollars.  She asked the nurse what did people do who had no insurance and could not afford the treatment?  The nurse replied “They go home and die a painful death.”  She is supporting John Edwards for president in 2008 so that this option will not be the only option for many Americans who are facing illness yet have no insurance.

I am supporting John Edwards because I see a man who is running for President who truly wants to make a difference.  He is not looking for title to add to his  resume.  He sees the big picture and has big plans for America and what she can do at home and in the world.  John Edwards wants Universal Health Care for all.  He wants to make Higher Education a reality not just a dream for our youth.  Sen. Edwards’ stance on the issues of today makes me proud to support him.  People ask how a gay male can support a candidate who does not support Gay Marriage and I respond that it is easy since he does support Equal Rights for all People.  He believes that Gays and Lesbians who are in a committed and loving relationship should have the same 1138 rights other couple has once they have a marriage certificate.  This is a major step in the right direction and one that I can live with for now.  I do appreciate the fact that Elizabeth Edwards has no problem with Gay Marriage and doesn’t see how it affects her in anyway.

I also see a true hope for America in the passion and energy that Sen. Edwards brings to the table.  He is not asking for us to just follow but asking us to join in and make a difference in the world ourselves.  The changes that America will need to go through to achieve some of his goals will call for sacrifice and hard work.  It is not something the elected officials can do all on their own.  It will take all Americans working together for the good of our country and the well being of our fellow citizens to make this vision happen.  It is a goal worth fighting for and John Edwards is the man who can lead us in that new direction.

We watched the video which John and Elizabeth Edwards had done for the house party.  I felt as if I were sitting in the breakfast nook speaking with them directly.  Check this video out and listen carefully to the message they are sending to all Americans.

We then had a conference call where all the house parties were listening in and some were asking questions.  Once again, I apologize that I did not write down names. When the call first started Sen Edwards had not arrived yet as he was in between places on a very busy day.   Elizabeth Edwards was on the line with us and started talking to us and took some questions.  The first question started with a compliment for Mrs. Edwards standing up to Ann Coulter and calling her out on the hate speech.  She was then asked a question about how a candidate can prepare or do well at a debate.  Elizabeth said that with the sound bite debates going on right now it was important to stand out.  She said we have a great group of candidates and the best way to describe it is that we have a box of Saltines.  You can be either the 16oz Saltines or the 12oz Saltines.   Sen. Edwards is more like a 24ox box of gourmet crackers in my opinion but I digress.  Elizabeth spoke about Universal health care and the vital need for it in America.

When Sen. Edwards came on line, Elizabeth did the introduction and spoke of the need to choose a leader who stand firm on the issues, has a plan for America and is working to make things better for everyone.  Elizabeth said “I believe my husband, John Edwards, is the man to do this.”  Sen. Edwards was gracious by first thanking us for being there and then started taking some questions.  A young woman from Birmingham, Alabama asked how would we make things better and assist people who are living in government housing projects improve their lives?  Sen. Edwards spoke about raising the minimum wage so that it is a Living Wage, allowing unions to organize so that workers have a voice, and Higher Education for all of American Youth who are willing to work.

Sen. Edwards also spoke about the Ann Coulter incident and that he supported Elizabeth completely in calling Coulter on her hate speech.  He said it was time for the hate speech to end and the American people deserved better.  Sen. Edwards said the hate speech that has been stock and trade of the Right Wing Hate Mongers has to stop and we have to speak to the issues and work to improve America.

I wanted to share my experience after the house party was breaking up.  It highlights one of the reasons I am supporting John Edwards for President in 2008 and why we must do everything we can to elect him.  I left the restaurant and went to the bus stop to go home.  As per usual, I just missed a bus and had a 30 minute wait for the next one. LOL While I waited for the bus, a woman walked up and in a child like voice said “Hello!  I see you are waiting for the bus.”  “Yes,” I replied and then continued thinking about the house party and how excited I was about the campaign.  I noticed that the woman had sat down on the bench and was fussing with her hair and making sure her skirt was arranged just so.  She then started to wave at every car or truck that passed on our side of the street with a child like innocence.  When someone waved, back she just beamed.   After a few minutes, she turned to me and asked “Is my doctor’s office over there or over there.” as she pointed in two different directions.   I had to tell her I did not know as I was not from that neighborhood.  She stood up and started walking in one direction to try and find her doctor’s office but as she left she asked me would I wait for her as she was scared to be alone.  I asked did she have a number of a friend we could call or the name of the place she was staying but she walked off without answering.  You see she was mentally challenged.  With mental illness being treated as a separate but not equal part of most insurance plans or health care plans, this woman who had a child like innocence and grace was wondering the streets of a major city instead of receiving the treatment she needed.  I do not think she was homeless as she was dressed well and seemed in good shape except for being out alone when I am sure she needed someone to take care of her.

Sen. Edwards believes mental illness should be treated as all other health care issues and treatment and coverage for treatment not cut or limited.  Sen. Edwards believes we, as Americans, can and should do better for Americans and all people.  He has asked us all to get involved and to try and make a difference.  I believe with John Edwards’ leadership America can become a place to be proud of again and where Americans are cared for and lifted up out of poverty and homelessness.  I believe that John Edwards’ vision for America is achievable and it will take us all working together to make this vision a reality.  I know I am going to do all I can to make this happen and I hope you will join John and Elizabeth Edwards and all the Edwards supporters in making this vision a reality.

If you believe we can make this vision happen, please make a donation to the John Edwards campaign at GLBT Democrats For Edwards 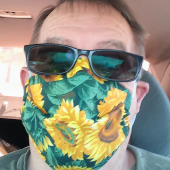 Trump’s Defense is That Sessions Perjured Himself

Where Do We Stand?