I recently read an article by Kansas City Star reporter and rising media star Jason Whitlock concerning the Jena Six. Unless you have been living in a cave in Pakistan, I’m sure you are familiar with the case. For those that aren’t, I have included a couple of links to the story to provide some perspective of both sides Jason Whitlock and Democracy Now.

While I don’t claim to have all the answers to this tragedy and as my website plainly states I believe that there are three sides to every story. I won’t try to resolve the legal aspects of a case that I don’t have all the facts to and I wasn’t a party in. The purpose of this post is to discuss the writer of the article, Jason Whitlock and his seemingly cavalier attitude towards the situation in Jena. Mr. Whitlock has caused quite a bit of controversy in the black community for this and some other articles he has written, critical of Blacks in general and athletes in particular. There are many in the black community who have labeled Mr. Whitlock an Uncle Tom and a house Negro.
I would first like to start with an excerpt from his original article to highlight what I find disturbing about Mr. Whitlock’s attitude toward the six black youngmen from Jena.

On the surface, the story sounds like a horrifying tale of Emmett Till-style justice. At a predominantly white high school in a segregated town (Jena), a black student sat under a shade tree that was traditionally used by white students. The next day three white students hung nooses from the tree, sparking racial tension and a sit-in (under the tree) by black students. The principal attempted to expel the three white students, but the school board overruled the principal and the students were given a suspension, which sparked more racial tension.

Police patrolled the school’s hallways. The town’s district attorney visited the school for an impromptu assembly, allegedly looked at the black students and said he could end their lives with one stroke of his pen. A little more than three months after the noose incident — and just days after two off-campus fights/heated exchanges involving a black student and white former students — the “Jena Six” punched, beat and stomped a white kid who made fun of a black kid for getting whipped in a Friday-night fight.

The white kid was knocked unconscious. After a three-hour hospital visit, he was released. The town prosecutor initially charged the “Jena Six” with attempted murder. Mychal Bell, the first of the six to stand trial and a Division-I football prospect, was convicted of aggravated second-degree battery and conspiracy by an all-white, six-person jury, a white judge and a white prosecutor. His public defender did not call a single witness in his defense. Bell could be sentenced to 22 years.

Mr. Whitlock provides the basic storyline seemingly intact. This is how the MSM has for the most part reported the story, not a lot to be upset about here. It is his next statement that I find so alarming. Mr. Whitlock has essentially stated and acknowledged that there was a racial incident precipitated by the white students with the nooses. He states that the all-white school board reversed the expulsion that the principal had given the three white students. He further states that the six young blackmen were subsequently charged with attempted murder which considering the case was over-charging them. So with all of this being said, here is what Mr. Whitlock had to say about the other culprits in this incident.

Before I go any further, let me state this: The prosecutor should’ve never charged these boys with attempted murder. The entire school board should be replaced for stopping the noose-hanging kids from being expelled. Fox Sports

That’s it! That is the extent of his outrage. Some people just don’t get it. I am all for personal responsibility and I do not believe that all whites are racist, nor do I believe that the biggest problem facing Black America today is day to day racism. But when you are confronted with such a blatant example of it, it must be dealt with swiftly and harshly. So, Mr. Whitlock is able to muster enough outrage to carve out two sentences towards the whites that began this whole incident.

Here is where I take exception to Mr. Whitlock’s characterization of the case. For the next eight paragraphs he takes the young blackman to task. He proceeds to lay out the case for Mr. Bell, the defendant who could receive 22 years, getting all 22 of those years. Never once does he lay out the past of any of the whites, not the three original clowns that put out the nooses, not the all-white schoolboard, not the white DA, not even the all-white jury. Obviously their histories were not relevant to this case, according to Mr. Whitlock.

Using Mr. Whitlock’s rationale if any rape victim can be proven to have had sex in the past, then she is deserving of the rape she in fact encouraged today. I believe in fair and accurate reporting, but let’s be sure we include all the information that is relevant to both sides. If the history of one side is relevant then the history of the other side should also be relevant. What are the histories of the others Mr. Whitlock, I bet you haven’t been fed that information from your sources.

It’s easy to kick folks when they’re down, it is always a lot harder to bend down and give them a hand. Mr. Whitlock complains that the other MSM reporters are providing a lazy version; I submit that he is as well, by providing research of only the history of the accused. Let’s have justice for all, I believe there is enough to go around.

Everyone is entitled to their own opinion, but not their own facts. – Daniel Patrick Moynihan

Time to Deal With Guns

Ramblings on the SCOTUS 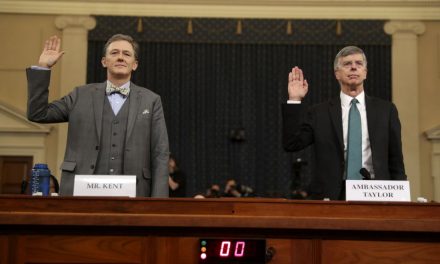 The Republican Defense of Trump Has Little Staying Power

Kavanaugh May Now Need the FBI