.
Both renowned soccer nations have never won the World Cup. Spain has never even been in a Final. It is however reigning European Champion of 2008. Holland had a great team in the 70s and played the World Cup Final in 1974 (Munich, Germany) and in 1978 (Buenos Aires, Argentina). Both times they were beaten by the host nation.

The Dutch school of soccer has been introduced to Barcelona and more recently to Bayern Munich at club level. German champion Bayern Munich under Louis van Gaal had a great year and delivers 7 players to the German national side and 2 players to the Dutch side. All three European nations play an attacking style of soccer in the 4-2-3-1 formation. The Spanish side has superior individual talent, but haven’t played at the top of their game. The young German side is the surprise of the World Cup tournament with attractive soccer and scored the most goals. As team they have shown a marvelous form.

Tonight it was a single moment of poor defending as Puyol was able to score the only goal out of a corner kick.

(The Guardian) – Spain grasped their place in a World Cup final with Holland on Sunday by proving that they can stop being their elaborate selves when different methods are essential. A disappointed Germany will be stunned that they should have conceded a goal at a set-piece, when Carles Puyol headed home after 73 minutes. His side were more at ease thereafter and Pedro squandered an opportunity to extend the lead.

73 min: GOAL!!! AND A RIGHT OLD-FASHIONED ONE AT THAT!!! Germany 0-1 Spain. Iniesta Willie Waddels down the left, and wins a corner off Lahm. Xavi snaps the corner out to the edge of the six-yard box, where Puyol crashes an IMMENSE header into the top-right corner. That’s a wonderful header. And one totally not in keeping with Spain’s style of football. That’s sport for you, right there!

75 min: Germany look shocked, and no wonder. Not only are Spain now with one foot in the final, they’ve put it there with a hammer blow of a goal. Every German would have felt that Puyol header like a fist in the solar plexus. 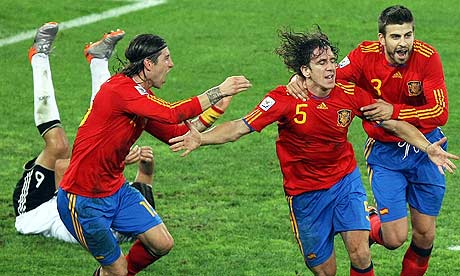 The DNC got the primary schedule wrong

The Kindness of Strangers

The most boring kind of football game (American style) is a 3-0 ending when one team happens to get close enough to the goal line to get a kick through the goal posts. And I’m afraid to say it, but most soccer matches remind me of that boring kind of American football game, defense versus defense, where offenses are lacking and so is the excitement, when it is all interminable back and forth. Fortunately, it is a rarity.

So with all due respect to our European and South American soccer wonders, why do I watch the World Cup?

. 25 Matches without a loss, won all World Cup qualifying games and a perfect score in South Africa. Orange clockwork are focused on the goal of winning the World Cup for the 1st time in Dutch soccer history. The top players of The Netherlands are playing in the four top leagues of European Soccer: Italy, Spain, England and Germany. Unique for the individual talented players to perform great as a team. Bert van Marwijk sticks with his 11 starting players with very few changes. The line-up: Goalkeeper: Maarten Stekelenburg (Ajax) Giovanni van Bronckhorst (Feyenoord – captain) Joris Mathijsen (Hamburger… Read more »

I hope there is more flow to the game than in the Spain-Germany match.  I want to see the Dutch players run around with the ball a bit, not just chase Spain and hope for a counterattack.

. Football wins! Dream finals Holland vs Spain! Johan Cruyff will be proud, sitting on the VIP stands on Sunday. The man can truly claim to be the Godfather of both sides: Oranje and Spain. Both teams are ingrained with the DNA the master (El Salvador) injected in the football cultures of both Holland and Spain. And what a reunion for Phillip Cocu and Frank de Boer (both assistant coaches played for Barca and shared the dressing room with Xavi, Iniesta and Puyol). For Gio van Bronckhorst and Mark van Bommel… While Wesley Sneijder, Raf van der Vaart, Klaas Jan… Read more »