One thing I haven’t seen much discussed is that the outcome of this November’s elections will decide who gets to redraw the 435 congressional seats in the House of Representatives, as well as the districts for each state’s legislatures. It should go without saying that this is important. The districts are redrawn every ten years based on the new census numbers. The last census was in 2000, and the districts were redrawn the next year.

“The importance of who controls redistricting cannot be overstated,” [executive director of America Votes, Greg] Speed wrote on the Huffington Post. “After 2000, Republicans had full control of the process in Florida, Michigan, Ohio, Pennsylvania and Texas, and netted a 31-seat gain in Congress (+15 GOP, -16 Democrats) in those five states in the next election.”

History is threatening to repeat itself.

If the [GOP’s] gubernatorial candidates were to emerge with wins in Texas, Florida, Ohio, Pennsylvania and Michigan — all states where Republicans either lead or are tied in recent polls — and the GOP holds or wins control of legislative chambers in those same states, Republicans could monopolize the post-2010 redraw.

Regardless of what’s going on in Washington DC today, the results of the midterms will influence what happens over the next decade. If you haven’t signed up with Organizing for America yet, please do it today. It will enable you to connect with like-minded people in your community so you can figure out how to organize politically for the fall. This is not election where you want to do nothing more than show up and vote. The other side is self-mobilized and came out in much bigger numbers for last night’s primaries in Kansas, Michigan, and Missouri. There are less than ninety days left before election day. Please get involved. Even lowly state representative races could wind up making a big difference in the direction of our country. 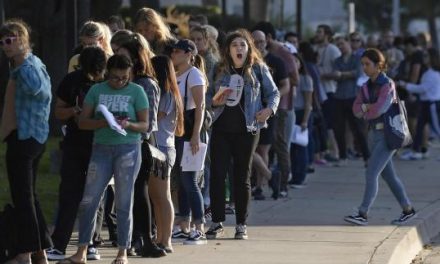 Texas Has a Lesson for the Presidential Contenders

The Midterms Will Make Us More Divided

In conjunction with the President’s birthday today, OFA is organizing phonebanking events all around the country today. We’ll be recruiting volunteers for midterms and calling “first time voters in 2008” to begin refining call lists well in advance of GOTV. Please get involved by going to http://www.barackobama.com and searching for an event near you.  I’ll be the data specialist at a phonebank in Venice, CA.

In 2.5 hours, 7 people made 388 phone calls into a competitive district outside of our own, culled lots of wrong numbers, spoke with 38 people, got voting commitments from almost all of them, and recruited 6 people to start volunteering in their district. When we finished our call list, we recruited more volunteers in our own district for a phonebank in two weeks.

And we ate chocolate brownies.

Show me some evidence that Dems have the guts to redraw lines to their advantage.

It’s so sad.  He’s whoring for the banksters to the end.