left/right media on schools: ‘no one cares about black kids!’

The politics of many aspects of American life are more or less ‘owned’ by their associated interest groups, often just one, the interest group making money from that aspect of U.S. life. But education is not one of those, and that might be a blessing, except that actual learning for our young people is not ‘the prize’ for either of the two interest groups — ‘anti teachers union’ and ‘pro teachers union’ — that do dominate. And we do have problems making sustained progress and resisting regress if we follow either of those interest groups all the way down their road. (A sidenote that these days the anti-teachers-union crowd is much more media/politically powerful and therefore potentially dangerous than its opponent.)

However, progress sometimes really happens when, somehow, an actually good idea from one side is implemented. For example, by the teachers union side, introducing free day care and kindgergarten, and reducing class size in primary grades. And, from the anti-teachers union side, using (in theory fair, predictive and reliable) tests to put some accountability pressure on teachers. While none of the preceding has worked miracles (maybe it’s not helpful or ‘real’ to promote expectations of rapid improvement), the numbers (here‘s another take on them) indicate the U.S. has made solid progress in elementary school education. The chart below, on writing, reading, and mathematics test scores from the ‘testing gold standard’ NAEP in the 2000s, shows half-grade (10 points is roughly one grade level) or better improvements in 26 of the 38 comparisons, in the short span of 5 or 6 years between 2003 and 2009 or 2002 and 2007 (less than half-grade progess blocks are in grey):

The results have been even more respectable over a slightly longer time span (PDF). Here is a summary of the data in the PDF link:

However, here’s the thing: the progress displayed on the chart and in the PDF file, though it is undeniably good news, cannot be talked about by either of the two interest groups that largely control the education debate. This weird “can’t talk about it” is widely shared — by, for example, Thomas Friedman in the NYTimes and Robert Samuelson in Washington Post on the anti-teachers-union side, and Diana Ravitch in The Nation and Kevin Drum in Mother Jones on the pro-teachers-union side. All four wrote recently about the general state of U.S. education over the last decade or so, and all four ignored the widespread and very real educational progress that has taken place, even while sometimes staring directly in the face of the NAEP results. Daily Howler Bob Somerby’s brilliant series on the lazy elite media politics of education inspired this diary; it’s called “Who cares about black kids?”; answer: pretty much no one in our media/politics elite.

This doesn’t mean we shouldn’t improve the scope, reliability and predictive power of assessment that is the foundation of the Bush Jr.s No Child Left Behind (NCLB), and understand the unique circumstances of teachers in the impoverished schools that are often the focus of NCLB punishment. NCLB’s quick, simple and mostly stupid closing of urban schools marked as ‘failing’ and then often rushing to replace them with no-teachers-union charter schools (this is what happens when the anti-teachers union folks get too powerful), needs to be heavily rolled back. (Which, of course, we notice anti-teachers-union Barack Obama very much not doing). (Read about excessive school closings here).

Again, as a by the way, the assessment numbers show that charters do no better than regular public schools at educating children. So a reality based debate on improving education would not even include them as an option. But we know that won’t happen, because it is basic DNA of the anti-teachers-union interest group to push privatized and union-free charters.

But first of all let’s recognize reality: our young people by and large are doing better in school over the last decade or so. And then try to understand it so better to preserve that success. Recognize, for example, that big city African-American 4th grader reading ability and 4th and 8th grader math ability has improved by nearly a grade level between 2002 and 2009. And they and Hispanic kids are doing even better longer term, as are nearly all U.S. elementary school kids. And these are real, NAEP results.

But also, somewhat tentatively, let’s be willing to recognize that maybe increased accountabilty pressure on teachers and administrators, including NCLB’s mandated publication of student test scores every year, might be a good thing. Though, yeah, many of the state-run tests are inferior to the NAEP tests (why can’t we just use NAEP’s tests everywhere (no one in the official two-sided debate ever asks)?) and we have ample (but underpublicized in the elite media (cuz those scandals typically contradict their ‘reform hero’ narratives)) evidence of cheating on high-stakes tests over the years, most recently in Atlanta and New York City (more here about New York). Obviously, testing should not be controlled by the very groups (politicians, administrators and/or teachers) that we as a society are trying to monitor and pressure with those tests. But the preceding is one of those important things that neither official side in the debate is interested in recognizing. 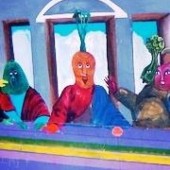 Roll that Klan Hero into the Slammer

The People Around Trump