The Reagan Doctrine: Terrorism and Assassinations

Although the American people and Congress supported the Grenada invasion, Democrats led by House Speaker Thomas P. (Tip) O’Neill, questioned the wisdom and morality of U.S. involvement in El Salvador, and, especially, Nicaragua. In 1982, Congress passed the Boland Amendment, prohibiting direct Central Intelligence Agency (CIA) efforts to overthrow the Nicaraguan government. The amendment, however, imposed no penalties for violation, which encouraged the administration to ignore it. Two years later, revelations that the CIA had aided in the mining of Nicaraguan ports and provided the Contras with an instructional manual that condoned terrorism and assassination caused an uproar on Capitol Hill. The Senate passed a resolution 84-12 condemning the mining. After much debate, Congress prohibited White House-supported funding for the Contras in the fall of 1984.

Reagan’s relations with Israeli leader Menachim Begin were less than harmonious and worsened considerably early in the President’s first term when Reagan watched in horror on White House television as Israeli bombers leveled Beirut, the capital city of Lebanon, killing many civilians. Reagan became so angry that on August 12, 1982, he telephoned Begin and told him the bombing had gone too far. “You must stop it,” Reagan said. Begin did, but the United States had moved a step closer toward involvement in Lebanon.

Secretary of Defense Casper Weinberger and the Joint Chiefs of Staff, influenced by the legacy of Vietnam, were reluctant to put U.S. troops in harm’s way. Reagan followed a middle course and in August 1982 sent 800 U.S. Marines to Lebanon as part of a multinational peacekeeping force that also included French and Italian contingents. Their mission was to maintain a cease fire during which PLO fighters in Lebanon would be allowed passage to neighboring Syria. Once the PLO had departed, Israel would withdraw from Lebanon.

After the PLO fighters left, Weinberger withdrew the U.S. troops. But with the international force withdrawn, violence broke out again. Lebanese militia with ties to Israel massacred 700 refugees at two camps in mid-September 1982, including at least three dozen women and children. President Reagan, appalled by the massacre, ordered the U.S. forces back ashore.

The Americans found themselves in the midst of a full-fledged civil war, one in which they unwittingly became targets as Israeli troops withdrew. In April 1983, Lebanese terrorists from a group called Hezbollah–which received financial and logistical support from Iran and Syria–detonated a truck bomb in front of the American Embassy in Beirut; seventeen Americans died, including eight employees of the CIA. American forces continued to come under attack sporadically throughout the summer of 1983. In response to the deaths of six soldiers, Reagan ordered U.S. warships to shell the camps of anti-American militias.

The most deadly attack against the United States occurred on October 23, 1983, when terrorists blew up the Marines’ barracks at the Beirut airport, killing 241 U.S. servicemen, most of them Marines. More than 100 others were wounded in the attack, many of whom suffered permanent injuries. Reagan subsequently called it, “the saddest day of my presidency…the saddest day of my life.”

Casey won approval for NSDD-166, a secret directive that inaugurated a new era of direct infusions of advanced U.S. military technology into the Middle East, which was to become the greatest technology transfer of terrorist techniques in history.

By January of 1985, according to the Washington Post’s Bob Woodward in Veil, his book on Casey’s career, he worked out with the Saudis a plan to use a car bomb to eliminate an Israeli recommended ‘liability’. Lebanese agents led by a former British SAS officer and financed by $15 million arranged by Saudi Ambassador Prince Bandar, were activated.

According to Woodward, Casey told his staff: “I’m going to solve the big problem by essentially getting tougher than or as tough as the terrorists in using their weapon, the car bomb.” With its new authority, the CIA set up ‘counterterrorism units’ similar to those Bush authorized in 2007. Casey quickly funded the “Foreign Work and Analysis Unit” (FWAU) inside Lebanon which had the assassination of Sayyed Mohammad Hussein Fadlallah as its first priority. Others targeted for death were Lebanese former Prime Minister Salim al-Hoss, Imad Mughniyeh and Walid Jumblatt, then supporting the PLO. The FWAU conducted a car bombing campaign in Muslim areas of Beirut and targeted the Cinema Salwa, Beirut’s Raouche Market, Sabra Street, the Abu Nawwas restaurant, and the Druze Social Centre, among others, killing at least 280 civilians and wounding nearly 1,150.

This mayhem was designed to ignite further internal strife and to send the Lebanese Resistance a message and offer: ‘Support a new May 17 agreement with Israel and we can help you.’ When this ‘offer’ was unanswered, and on the Mossad’s recommendation to Casey, Fadlallah was targeted on March 8, 1985.

The Bir Abed Massacre was caused by an enormous car bomb outside Fadlallah’s home as he was conducting a religious studies class for women. Had a neighborhood woman not detained him with questions, Fadallah would have been at nearly the exact spot where the rigged vehicle exploded according to Hezbollah investigators. The blast killed 83 people, mainly school girls, women and children, and wounded 283.

The attempted assassination of Fadlallah, who is to this day Lebanon’s most respected senior Shi’ite cleric and social worker, enraged Lebanon, including Dahiyeh’s two century old Christian community, long beneficiaries of his social services and respectful of his calls for religious dialogue and tolerance. Six months later, on September 12, in what appeared to be a tit for tat operation, the supposedly impregnable perimeter defenses of the new U.S. embassy in eastern Beirut was attacked killing 23 employees and visitors.

Eleven local individuals confessed to various roles in the Bir Abed bombing. The terrorist attack was based on now admitted faulty Israeli supplied “intelligence”. Israel had advised the Reagan administration that Fadlallah was the founder, spiritual leader, and chief of operations for Hezbollah and was behind attacks on the US Embassy and the Marine barracks as well as the kidnappings of western hostages. Not one of the claims was true as the White House was later to learn. But at the time, CIA Director William Casey was beside himself that the US had, less than a year earlier, been forced out of Lebanon by what he told the President were “third rate rabble-rousers”.

My Advice For Biden’s Media Approach 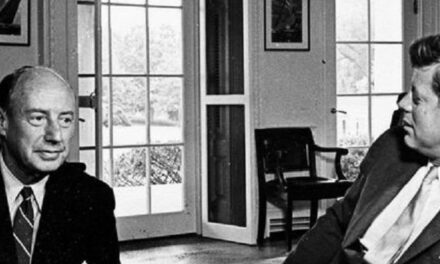