(Libya TV/Reuters) – South Africa is not facilitating Muammar Gaddafi’s exit from Libya after revolutionaries swept into Tripoli and knows that the Libyan dictator will not seek asylum in the southern African country, Foreign Minister Maite Nkoana-Mashabane said today.

Nkoana-Mashabane also denied at a media briefing in Johannesburg that South Africa had sent aircraft to Libya for Gaddafi’s exit and said Gaddafi’s current whereabouts are not known.

“Should we start speculating if he is going to ask for asylum in South Africa? No we will now speculate because we know yes for sure that he will not ask to come here,” Nkoana-Mashabane told reporters. “I am quite amazed that there is even an insinuation that we are facilitating the exit of anyone,” she added.

South African President Jacob Zuma has spearheaded a mediation effort by the African Union but two personal visits to Libya by the South African leader this year failed to produce a tangible outcome. Zuma has been critical of NATO air strikes on Libya saying the United Nations resolution authorising intervention had been abused.

South Africa will not recognise a revolutionary government at this time. “As far as we are concerned, if this government falls, there is no government,” Nkoana-Mashabane said.

(Globe and Mail) – Col. Gadhafi, born in a tent in the Libyan desert in 1942, the son of an illiterate Bedouin camel herder, used the military as his vehicle to political power. As the leader of a group of young army officers, he led a coup against the monarchy in 1969 to seize command in Libya.

In the 1970s, he declared himself a socialist revolutionary, supporting dozens of radical groups and terrorist organizations, including the Irish Republican Army, the Black Panthers, the Shining Path, and various Palestinian extremist groups. He propped up the murderous Idi Amin in Uganda, and sent his army into neighbouring Chad. He was involved in a series of coup attempts and political assassinations across Africa.

He continued to dabble in offshore violence in the 1980s. His agents were linked to the bombing of a West Berlin disco, the shooting of a British police officer in London, and the bombing of Pan Am flight 103, in which 270 people died in an explosion over Lockerbie, Scotland. He was also secretly developing weapons of mass destruction. In 1986, American warplanes bombed Tripoli on the orders of president Ronald Reagan, who called Col. Gadhafi a “mad dog.”

February 25, 2011 — Links International Journal of Socialist Renewal/Green Left Weekly — On February 22, Muammar Gaddafi was boasting on state TV that the Libyan people were with him and that he was the Libyan revolution, even while his dwindling army of special guards and hired mercenaries attempted to drown a popular revolution in blood. 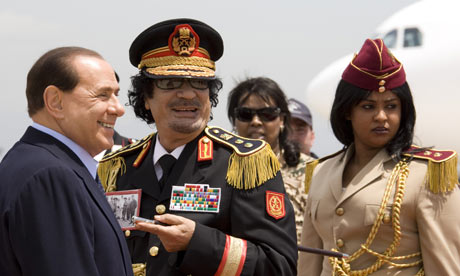 Civilians were strafed and bombed from helicopters and planes. Snipers with high-powered rifles fired into unarmed crowds. Two pilots flew their fighter jets to Malta rather than bomb their own people and another two are reported to have crashed their jets rather than attack civilians. Sections of the armed forces, several diplomats and a couple of ministers have abandoned the regime and, at the time of the writing, the east of Libya was in the hands of popular revolutionary committees.

And as more sections of his armed forces stared to go over to the people, Gaddafi ordered troops who refused to shoot their own people to be executed.

Gruesome footage of the carnage was revealed to the world despite the Gaddafi regime’s desperate attempts to seal the country by blocking the internet and locking out journalists.

First Gaddafi’s son Saif al Islam (a darling of greedy US and European corporations in recent years) and then Gaddafi himself tried to deny these massacres while simultaneously threatening the Libyan people with ruthless retribution against those who dared to rise up against the regime.

While the regime’s genocide against the Libyan people unfolded, it took days before the US and other Western governments were prepared to condemn the regime for this monstrosity. Even as late as February 23, US President Barak Obama had not condemned Gaddafi by name.

Tony Blair was flown to Libya for secret talks with Colonel Gaddafi just days after denying he was an adviser to the dictator. Mr Blair was ‘entertained as a brother’, a senior Libyan government source has revealed. He told the Daily Mail that the former prime minister had offered Gaddafi, with whom he is on first-name terms, ‘a great deal of invaluable advice’.

BP  is being accused in the U.S. of helping to engineer the early release of Lockerbie bomber Abdelbaset Al-Megrahi in exchange for oil concessions from the Libyan government.

Mr Blair has been closely associated with BP and as prime minister in 2007, he famously shook Gaddafi’s hand after smoothing the way to a £450million exploration deal between the corporation and Libya’s National Oil Corporation.

Relatives of the Lockerbie victims condemned the meeting. ‘For Blair to meet Gaddafi like this is incredibly hurtful and immoral,’ said Kathleen Flynn, from New Jersey in the U.S. Her 21-year-old son John Patrick was one of 270 killed in the bombing.

‘I do not believe he can even have a moral compass anymore. Because of people like Blair we do not feel that justice has been either served or done in our case. He is a turncoat,’ she added.

Since leaving Downing Street, Mr Blair has been advising firms including JP Morgan – with which he has a £2million-a-year contract – about investment opportunities in Libya.

If you are following the election on the internet, you are probably a liberal.

Some Thoughts on Obama and FDR