Iowa Republicans have introduced a bill to reduce the salaries of its State Supreme Court Justices by eighty percent (or 80% if you like numerals and symbols). But not all of the Iowa Supreme Court Justices – just the four who voted that a law depriving same sex couples of the right to marry was unconstitutional get their pay docked.

On Monday, five state House Republicans attempted to amend Senate File 442 with H-1327, which declares that “[a]ny justice appointed to the supreme court prior to April 3, 2009, and who remains a justice of the supreme court on or after the date the electorate ratifies a constitutional amendment declaring marriage between one man and one woman is the only valid or recognized legal union in this state shall have the salary of the justice reduced in accordance with this section unless the justice resigns immediately.”

Admittedly, this appears to be a suck-up response to the GOP base. The excise for this bill offered by its proponents is that the justices in their decision ” “trashed the separation of powers” between the legislature and the judiciary because these justices voted for teh gays. Seriously.

The justices “trashed the separation of powers” with their unanimous Varnum v. Brien decision and implementation of same-sex marriage without a change in state law banning any marriages expect between one man and one woman, added Rep. Dwayne Alons, R-Hull. […]

It’s not meant to be punitive, Alons and Shaw said Tuesday.

“We’re just holding them responsible for their decision, for going beyond their bounds,” Shaw said.

Let me say, this argument is pure stupidity. Courts have been interpreting state laws and constitutions for over 200 years. That is their specific power under state and federal constitutions – to interpret the law. To claim that doing what they have the authority to do violates the separation of powers between the legislative and judicial branches of government is prima facie absurd. Nonetheless, I’m sure the logical fallacy of claiming that the Judicial branch oversteps its bounds only when it overturns a law because it conflicts with the state’s constitution probably will be lost on social conservatives and other homophobic supporters of the Iowa Republican Party. To them, equal rights is only important if they get to decide who gets treated equally, and who can be kicked to the curb as less than human.

I doubt this bill will pass, and if it should, I doubt it will survive judicial review (see, prohibition against ex post facto laws). So the only purpose it serves is to rile up the core constituency of the Republican Party without having to actually do anything to eliminate marriage equality, such as an passing an amendment to the state constitution banning same sex marriage (which would be subject to review by the federal court, by the way). However, it will make the “Hate the Gay” crowd feel a little better and more likely to rally round their GOP banner, which is all it is intended to do, in my opinion.

The SCOTUS is Ruining This Country 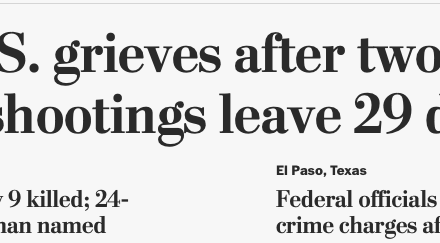 The Shooters are a Fascist Movement’s Foot Soldiers

So, are these clowns saying that judges are not permitted to interpret the law? They cannot rule on the constitutionality of a law?

No, only when they overrule laws favored by conservatives.

I think they are too stupid or cynical to make the argument that overruling laws favored by liberals would be a violation of separation of powers.

Speaking of Iowa judges, in year five Obama finally got a judge on the 8th Circuit.

Even setting aside the ex post facto issue, I’m also pretty sure there are strong judicial prohibitions against writing laws that specifically target individuals. It’s unconstitutional to write a law that says, “Jack Mason from Bellefonte, PA is now only allowed to wear red shirts.” I’m not a lawyer, but I’m pretty sure that’s the case.

Yeah, there is also an equal protection issue in that instance.

I think that “bill of attainder” prohibition in the Constitution will be invoked.

Even the RATS (Roberts, Alito, Thomas, Scalia) would see this as a threat to an independent judiciary, or, more importantly, their lively-hoods.

Insert another quarter to play again.

Absolutely. Various initiatives have been barred from the ballot in this state (Washington) for precisely that reason, and in addition to federal law, it’s likely that Iowa, like Washington and most other states, has a similar prohibition.

Funny how so many conservatives are only worried about FREEEEDDUMMMM when it applies to them.

so much for their rebranding efforts

I really get motivated by reading something like this .