The Supreme Court for Rich People

The conservative majority on the Supreme Court doesn’t think that it’s possible to corrupt a politician by giving them money. Nor do they see a problem with wealthy individuals buying every politician in the country, as long as they don’t make their demands explicit.

The Supreme Court pressed ahead on Wednesday with the majority’s constitutional view that more money flowing into politics is a good thing — even if much of it comes from rich donors. By a five-to-four vote, the Court struck down the two-year ceilings that Congress has imposed on donations to presidential and congressional candidates, parties and some — but not all — political action groups.

The main opinion delivered by Chief Justice John G. Roberts, Jr., said confidently that corruption in politics will be kept in check by caps — left intact — on how much each single donation can be. Removing the ceilings on the total amounts that may given in each election cycle will not undermine those limits, Roberts predicted.

Even John McCain was disgusted by the ruling.

US Unable to Secure Benghazi Consulate for FBI Investigation 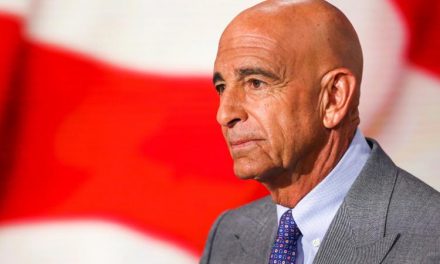 What Did Thomas Barrack Know, and When Did He Know It?

Just another lurch in the direction of the establishment of our own permanent oligarchy.  If we’re not already there.

We are there, Mike. I coined the word “PermaGov” a number of years ago. It’s even more permanent now. Bet on it.

Ah yes, the libertarian utopia where the John Galts (koch bros, etc) of the country BUY their politicos

We are inching ever closer to that far right dream.

That’s who we are now, that’s who we will be for the rest of our lives. All over the world. What a promising future for the plebs and the kids. In Ukraine they’re already feeling the pain from the IMF, EU and US. All the billions ‘for Ukraine’ go to the banks so they can lend the money once again to Ukraine. No Ukrainian will see even one cent. Not one. They just have to pay 50% more for natural gas, as a starter. And no one even makes a squeak. You might see it as blowback for the French… Read more »

Perhaps, but Ukraine just shed its least profitable piece of geography. Russia will be taking on a huge burden with Crimea, a burden a more united Ukraine no longer has.  And the sanctions on Russia are already having economic effect.

Don’t get me wrong, Putin is wrong to run around chopping up his neighbors, but as they say, be careful what you wish for…

I find this reply very arcane.

All the bitching about how Congress can’t do anything, and they actually do get a cap on donations, and now it’s all undone by the Supreme Court?

The point is gone, donnah. All that’s left now is an empty pencil stub with no eraser.

Yep, just more routine calling of “balls n’ strikes” by “Umpire” Roberts.  He had no conservative “agenda”, nosiree….judicial “restraint” in action.  But totally expected.  After all, there should not be a limit on how many federal politicians one can bribe with maxing out on their campaign! It’s nice of the Supreme Legislative Body to conclude that the individual caps don’t violate CEO and plutocrat First Amendment “rights” and that they think individual caps will successfully fight corruption and appearance of corruption. They are the real policy experts in this area, I’m sure!   How exactly there is a constitutional difference… Read more »

Called it a while ago: Roberts at the Bat … What I’ve taken away from the hearings so far is that instead of a man with a deep and profound respect for the Constitution, the US legal system and equality, Roberts is a man who sees it as a game. A game that he competes in for the sole purpose of winning. Winning for his client. Winning for himself. He represents the most cynical and self-serving of how attorneys are viewed by average Americans. Winning for the sake of winning and collecting lots of money for doing so from those… Read more »

I’m not at all surprised.

And now, no longer will our poor multi-millionaires/billionaires voices be silenced!

We’ll have the best government rich people’s money can buy!!!

Oh well, if I’m going to get screwed, I might as well get hammered – glug, glug, glug.

On the plus side, members of Congress won’t need to spend as much time “dialing for dollars.”  5,000 individuals (1,000 or fewer families) can fund all federal elections for a mere $3 million/election cycle.  And nine times out of then, the sheeple will vote for the person that collected the most money from the oligarchs.

Yes indeed, let the Battle for the Oligarchs proceed!

Hard to come up with a single promise Roberts made during confirmation hearings that he has stuck with.

Bare-faced intentional lies, every single one.

If you heard Roberts make any promises during his confirmation hearings, you weren’t listening carefully enough.  He fibbed some, but mostly he used a lot of words to say nothing.  What he didn’t say was what was telling — but alas, there weren’t forty DEM Senators in 2005 that were smart enough to balk at this evil little prick.

He’s disgusted with the ruling because the only law that has his name on it in any meaningful sense in his entire time in the Senate has been ripped to tattered shreds.

Well that makes perfect sense, unlike practically everything else he says.

I am angry and saddened beyond belief.  I have no words.

Anyone see the original “Rollerball” lately? How the different corporations ruled the world and people rooted for rollerball teams?

(Also, McCain should not be used as the extreme of outrage, like, “Even John McCain…” I think that some of his outrage is merely dyspepsia.)

Wall-E also comes to mind. We all shop at Buy More!

Think of all those crappy political ads that will start sometime before Labor Day (or whatever it’ll be renamed as).

That one really does need to be re-named.  The irony is a bit too much at this point.

So with the senate and its judicial confirmation power up for grabs in Nov, when exactly does the extremist Repub Supreme Court and its horrendous decisions become an election issue?

I wish all the people that stick their noses up at Obama because he’s not “pure” enough would pay attention to this.

For almost forty years, the Democratic Party has been running on “think of the Supreme Court” to get people to vote for them.  It’s not enough.  Particularly considering the fact that Democratic Senators voted to confirm Kennedy, Scalia, Alito, and Roberts.

Right, because the wealthy few being able to throw as much money as they want at elections all across the country could never have the affect of say swaying what types of policy the majority of elected officials will pursue or support.  That could never happen.

’bout time to use the second amendment solution.

It will be a miracle if this doesn’t end the Democratic control of the Senate. Lots and lots of money will favor McConnell in KY and Perdue in GA.  And keeps the open NB seat in the GOP column.   The “cheap” seats, currently Democratic, (strong enough GOP candidates) that are now likely gone: AK MT SD WV That means the GOP only needs to take two of the following: AR – Pryor will struggle against Cotton (GOP) Iowa (Ernst or Jacob could beat Braley) Louisiana (Landrieu will struggle against Bill Cassidy) MI (Land (GOP) + money will be strong)… Read more »

The good thing is that most of the oligarchs inherited their wealth and are stupid as fuck, see, 2012.

They’ll continue to dump their money trying to (s)elect people to the House and Senate, and possibly allowing a bill or two to get voted on in the Senate that has no chance of 2/3 majority for veto bypass.

Know someone who isn’t a fucking lunatic and doesn’t vote?