What NATO Left Behind In Libya

(Dutch TV) – The only witness to the murder of the Libyan human rights activist Salwa Bugaighis was also murdered. His body, covered with foltertraces, was left by strangers at a hospital in the eastern city of Benghazi, as reported in local media.

An Egyptian gardener who was reported as having been shot in the leg in the moments leading up to Salwa Bugaighis’ murder has died in unexplained circumstances after he was being questioned by Benghazi police.

The spokesman for Benghazi Medical Centre (BMC) told the Libyan Herald that the man, who has been identified as Salem Ahmed Abdul Qader, arrived at the hospital by ambulance earlier today. He was pronounced dead on arrival and his body showed signs of torture.

The witness was a security guard of Bugaighis. He saw how she was killed  at her home in Benghazi with a shot through the head. Her husband has since been missing. The guard was shot in the leg. After the murder, he was taken away by police for questioning.

The situation in Benghazi is very tense. Radical Islamist militias are involved in a power struggle with a [renegade] general of the Libyan army. [Name please western media! – Oui]

Bughaighis was an outspoken opponent of dictator Gaddafi. After his death, human rights activists reacted against the many armed militias in Libya. She also stood up for women’s rights, to the chagrin of conservative Islamic groups in Libya.

Bugaighis, a lawyer, played an active part in Libya’s 2011 revolution, which overthrew the regime of Muammar Gaddafi. A former member of the National Transitional Council, the rebellion’s political wing, she was vice-president of a preparatory committee for national dialogue in Libya.

The US ambassador to Libya, Deborah Jones called the news “heartbreaking”, and on her Twitter account denounced “a cowardly, despicable, shameful act against a courageous woman and true Libyan patriot”.

Earlier on Wednesday Bugaighis had participated in Libya’s general election. She published photos of herself at a polling station on her Facebook page.

Continued below the fold …
Fighting the militants the US and allied Powers supported in the overthrow of Gaddafi here in Libya and following the migrating of jihadists to Syria and Iraq. The Neocons successfully creating chaos in the Middle East to the benefit of only true ally with Western moral values, Israel.

(Business Insider) – As the United States and its allies get deeper into the confrontation with Qaddafi in Libya, it’s worth stepping back to consider what is actually taking place–and why.

We’ve been told very little about the rebels seeking to supplant the dictator. But one in particular deserves our attention. General Khalifa Hifter, the latest person to head the rebel forces.

There’s been little effort to look at Hifter’s background. One notable exception was the work of the always-diligent McClatchy Newspapers, which briefly inquired about his background in late March. That report does not seem to have generated much additional digging by other news organizations.

The new leader of Libya’s opposition military spent the past two decades in suburban Virginia but felt compelled — even in his late-60s — to return to the battlefield in his homeland, according to people who know him.

Khalifa Hifter was once a top military officer for Libyan leader Moammar Gadhafi, but after a disastrous military adventure in Chad in the late 1980s, Hifter switched to the anti-Gadhafi opposition. In the early 1990s, he moved to suburban Virginia, where he established a life but maintained ties to anti-Gadhafi groups.

Late last week, Hifter was appointed to lead the rebel army, which has been in chaos for weeks. He is the third such leader in less than a month, and rebels interviewed in Libya openly voiced distrust for the most recent leader, Abdel Fatah Younes, who had been at Gadhafi’s side until just a month ago. [Abdel Fatah Younis was assassinated by Islamist group on July 28, 2011]

The United States strongly condemns yesterday’s brutal and senseless murder of human rights and civil society activist Salwa Bugaighis in Benghazi, Libya. I was fortunate to have the opportunity to meet Salwa in Libya in November 2011, soon after the ouster of Qadhafi.  I was deeply impressed by her courage, leadership and dedication to building a peaceful, democratic Libya where the rights and freedoms of all Libyan women and men are respected and protected.  We join the Libyan people in mourning the loss of Salwa Bugaighis and call on all Libyans to reject violent extremists seeking to silence their opponents and derail the aspirations of the Libyan people. 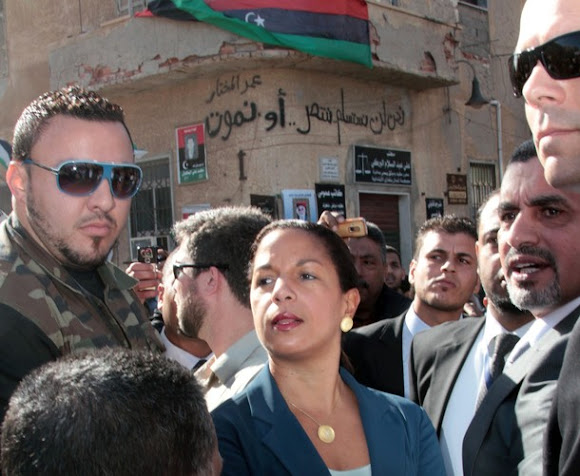 « click for more info
"It is good to be in Libya," Amb. Susan Rice tweeted shortly after arriving. (ABC News)

Rice visited a warehouse that was converted into a prison and torture room, calling it “an atrocity committed by the Qadhafi regime as it was collapsing. The stench of death & cruelty was pervasive,” she tweeted.

Will Cowards Really Be Rewarded?

Top 5 Reasons US Aid to “Moderate” Syrian Fighters is Quixotic (Informed Comment) – The Obama administration’s fruitless search for effective Sunni “moderate” fighters in Syria continues,  with the announcement of a $500 million grant to them for training and weaponry. This policy seems in part to be driven by Saudi Arabia from abroad and by liberal interventionists, including Kerry, National Security Adviser Susan Rice and UN Ambassador Susan Powers. It is very bad policy, committing all over again the worst mistakes of the Reagan administration in Pakistan and Afghanistan in the 1980s. Anti-Communist crusading and liberal interventionist imperialism turn… Read more »

NYTimes report on death of Salwa Bugaighis Where Killings are common.

…A Libyan friend of Bugaighis told me, “I am shocked beyond words. Sometimes I think that we just fucked up by removing Qaddafi–that I would rather live under a dictator and not worry about the safety of my family.”
…

That would be Honduras — as easily projected by many that opposed the coup, it’s not going well there for the poor.

Why Are Honduran Children Leaving?  Hillary didn’t recognize the poor in Honduras as real people in 2009 when she backed the coup any more than she does the children today that she cavalierly says must be deported.

Hillary’s office says the $225K UNLV fee is going to Clinton Foundation, extracting money from a private institute to fund the ultra-wealthy.

Hillary gets a pass from me on this one; she’s merely raising money for her husband’s charitable foundation (and Chelsea may be an expensive employee). The racket is the foundations all moving big money amongst themselves.  Except for Palin who took $75,000 from the CSU Stanislas Foundation for herself.