Oh yes, returning to the eighties of pre-Reagan era and the anti-Brezhnev Soviet rhetoric … will the old warriors never die? [Ion Mihai Pacepa is author of Kerry’s Soviet Rhetoric] Obama won’t tolerate Russia making moves on his chess board as the American Empire tries to hold on to a power grip from East to West. Ultimately this will lead to a renewed fear of a nuclear catastrophy as the US has reneged on the NPT treaty and permitted/supported nuclear arms in the Middle-East (Israel) and SE Asia (Pakistan and India). There are fears the Pakistan nuclear bomb has been sold to Saudi Arabia to counteract Obama’s Iran nuclear proposals.

U.S. Aid to Anti-Communist Rebels: The “Reagan Doctrine” and Its Pitfalls

A critical change in U.S. foreign policy toward world communism has begun during the past year. In marked contrast to the established cold war doctrine of “containing” Soviet expansionism, the new strategy envisions American moral and material support for insurgent movements attempting to oust Soviet-backed regimes in various Third World nations. Initial hints of this “Reagan Doctrine” surfaced in the president’s February 1985 State of the Union Address when he affirmed, “We must not break faith with those who are risking their lives–on every continent from Afghanistan to Nicaragua–to defy Soviet aggression and secure rights which have been ours from birth. Support for freedom fighters is self-defense.” Administration rhetoric on this theme increased dramatically thereafter. In a speech on February 16, 1985, President Reagan reiterated his assumption that a kinship exists between this country and anti-communist liberation movements:

Time and again we’ve aided those around the world struggling for freedom, democracy, independence and liberation from tyranny. . . . In the 19th century we supported Simon Bolivar, the great liberator. We supported the Polish patriots, the French resistance and others seeking freedom. It’s not in the American tradition to turn away.

The implication was obvious: the United States has an obligation to aid the latest generation of “freedom fighters.” Secretary of State George Shultz expanded on this embryonic policy assumption in a February 22, 1985, speech before San Francisco’s Commonwealth Club. There and in a subsequent Foreign Affairs article, Shultz asserted that a wave of democratic revolution was sweeping the world. He contended that for years the USSR and its proxies have acted without restraint to back insurgencies designed to spread communist dictatorships. Wars of national liberation “became the pretext for subverting any non-communist country in the name of so-called ‘socialist interationalism.”‘ At the same time, the infamous “Brezhnev Doctrine” proclaimed that any victory of communism was irreversible. According to Shultz, the Soviets were saying to the world: “What’s mine is mine. What’s yours is up for grabs.”

Although for a time Moscow’s strategy seemed to be working, Shultz stated, such Soviet “pretensions” have provoked a wave of democratic rebellions in the 1980s. In Afghanistan, Nicaragua, Cambodia, Mozambique, Angola, and elsewhere, forces have arisen to challenge Marxist hegemony. This change was of momentous importance, according to Shultz.

Initially, the Reagan administration’s rhetoric was considerably more universal than its actual policies. Indeed, even Shultz conceded that the “nature and extent” of U.S. support “necessarily varies from case to case.” In practice, this proviso meant that Washington was willing to provide material assistance to Afghan resistance fighters facing Soviet occupation forces and to Nicaraguan contras seeking to oust the Sandinista government. The Reagan administration seemed considerably less responsive to the aid requests of insurgent movements in Cambodia, Angola, and Mozambique. Particularly in the latter two cases, embracing the rebel cause conflicted with other foreign policy objectives, most notably the promotion of regional political stability.

If the administration assumed that it could confine support for anti-Marxist insurgencies to the realm of rhetoric, translating words into concrete action only in selected cases such as Nicaragua, it miscalculated. The Reagan Doctrine fired the enthusiasm of the conservative movement in the United States as no foreign policy issue has done in decades. At last, said conservatives, there was a strategy that transcended the sterile, defensive containment doctrine and offered the possibility of helping to liberate nations already suffering under communist domination.

It’s not so difficult to extend Carter and Reagan’s support to the Afghan mujihadeen in Afghanistan to the present day same jihadists in the Middle East. However the times have changed and the Cold War confrontation between the U.S. and the Soviet Union has become a lot more complicated after the September 11th attacks by Al Qaeda.  The Bush doctrine to invade Iraq has excerbated the turmoil seen today.

Waging war by proxy has a multiple of new iniatives throughout the Middle East and the West has given it’s blessing in Libya and Syria. The NATO alliance has become the most aggressive player around the globe with the Eastern bloc of European nations and Turkey at the forefront. The military and political leadership of the U.S. transcends the sovereignty of the individual nations.

How you like this one, a move with full approval by Ms Nuland … Georgia’s Saakashvili, former pro-NATO president of Georgia (think war of aggression in Ossetia in 2008) is named citizen of the Ukraine and Governor of Odessa. In Germany’s Angela Merkel’s own party CDU/CSU is being torn apart over her anti-Russian policy in stride with NATO and Obama’s position in the Ukraine. More fireworks to follow …

WASHINGTON (AP) — The Obama administration is weighing a range of aggressive responses to Russia’s alleged violation of a Cold War-era nuclear treaty, including deploying land-based missiles in Europe that could pre-emptively destroy the Russian weapons.

This “counterforce” option is among possibilities the administration is considering as it reviews its entire policy toward Russia in light of Moscow’s military intervention in Ukraine, its annexation of Crimea and other actions the U.S. deems confrontational in Europe and beyond. 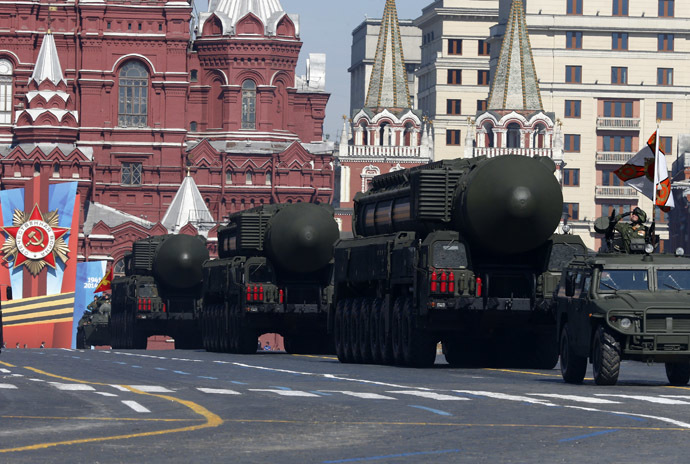 The options go so far as one implied – but not stated explicitly – that would improve the ability of U.S. nuclear weapons to destroy military targets on Russian territory.

…
At his Senate confirmation hearing in February, Defense Secretary Ash Carter noted his concern about Russia’s alleged violation of the 1987 Intermediate-range Nuclear Forces, or INF, treaty. He said disregard for treaty limitations was a “two-way street” opening the way for the U.S. to respond in kind.

The standoff speaks volumes about the depths to which U.S.-Russia relations have fallen. And that poses problems not only for the Obama administration but also for the NATO alliance, whose members in eastern Europe are especially leery of allowing Russian provocations to go unanswered.

Western leaders are meeting Sunday and Monday for a G-7 summit – from which Russian President Vladimir Putin has been excluded – where Russian aggression will be a key topic. On Friday, Carter plans to meet in Germany with American defense and diplomatic officials to map out a counterstrategy to Russia’s military intervention in Ukraine and to reassure allies worried about Moscow. The treaty issue is not a specific agenda item for Carter, but aides said regional nuclear force issues could come up.

Trump is Captured by the Russians? Maybe, Maybe Not. Try Other Approaches.