Implementation of the establishment’s homeland security, military and foreign policy in line with the PNAC crowd through think-tanks for Democrats with funding by US billionair oligarchs like Soros and  Saban. See Soros’ NGO’s banned by foreign nations and the recent speeches by Secretary Kerry and Democratic candidate Hillary Clinton at the Saban Forum.

The next American president will inherit an overseas military base realignment process begun in the first term of the George W. Bush administration. This realignment, guided by an effort known as the Global Posture Review (GPR), was perhaps former Secretary of Defense Donald Rumsfeld s chief intellectual and policy accomplishment during his six-year tenure at the Pentagon. Unlike his likely warfighting legacy, particularly in regard to Iraq, the GPR is on generally sound conceptual foundations.

…
In the end, about 70,000 American military personnel will be relocated as a result of the GPR, not counting those directly affected by the Iraq and Afghanistan operations. While this realignment is not comparable in magnitude to what happened after World War II, or even after the Cold War, it is nonetheless a major milestone in American strategic policy. To date, the U.S. armed forces are about halfway through reductions and other changes in their European ground force capabilities.

Now everyone should understand the agression of the White House and US think tanks to destroy European social fabric, put NATO on war-time footing – see Georgia, Poland, Ukraine and Baltic States – thereby forcing its European partners to double their efforts and costs for the military. European states failed to unite and organize their own defenses as NATO urged and demanded to fulfill its obligations under US military command. A defense organization fighting alongside the United States in Afghanistan, Iraq, Libya and Syria. See in recent years my comments/diaries on the Atlantic Council and its advisors to push NATO into a forward position in Eastern Europe and it’s succes to de-legitimize non-cooperative regimes, overthow by subversion, NGO funding and supplying opposition mercenaries with funds and weapons. Most recent succes of the Obama administration was to demonize Russia under Putin and play-out its superior hand by devisive politics in Kiev.

[Dan Fried, President of the Atlantic Council of the US reminded us in introducing the Georgian President, he is a revolutionary: .  h/t Everything That is Not Private is Corrupt | by George Turner on April 2nd, 2008 | He is the ONLY author besides myself where  “Atlantic Council” is mentioned in a diary here @Booman Tribune. What’s missing fellow bloggers? – Oui]

The year 2004 is well known for the Orange Revolution in Ukraine– a victory for Viktor Yushchenko – that failed within two years and never diminished indemic corruption. The year 2006

In the year 2008, Georgia under Saakashvili (McCain protectorate) led a military action against South-Ossetia and provoking a Russian response. It was also the year of the remarkable election victory by that young senator from Illinois who beat favorite from the Democratic Party, Hillary Clinton. 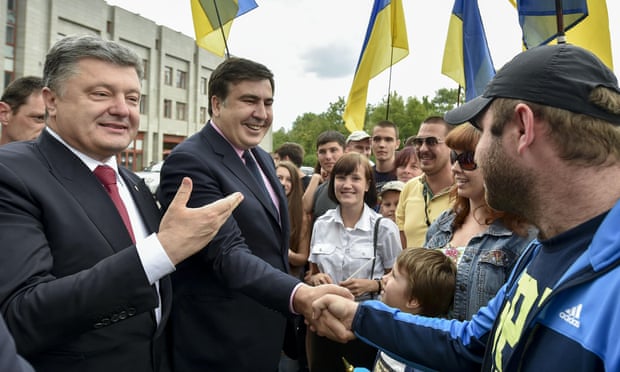 Saakashvili is a fugitive from justice in Georgia after years of taking refuge in the US. In 2015 he has been named governor of Odessa in the Ukraine to continue his personal vendeta with Russia. With Obama there was hope for change which had evaporated quickly due to many wrong choices to woe [?] the establishment. The choice for Hillary Clinton was a very bad one. The establishment is in a position to get its revenge after eight years. The anti-austerity movement or social revolution seen in Spain, Italy, Greece and in the British Labor Party under Jeremy Corbyn hasn’t reached the Atlantic shores of the US yet. HRC has a solid lead over Independent Sanders.

And Hillary May Be Our Next President?

Original article continues below the fold …

The GPR s objectives are to enhance American military capability and flexibility for the so-called long war on terror, to deal with major shifts in the global alignment of power in Asia, to keep traditional partnerships strong while building up new partnerships with countries of Eastern Europe and Africa and parts of Central Asia, and to improve the quality of life for American military personnel.

But even if the GPR seeks the right goals and is undergirded by sensible overall logic, the time is right for a review of the review. There are several significant problems in its design and execution, due in part to Rumsfeld s domination of the process, particularly in the early stages: despite the fact that an effort such as the GPR should be thoroughly interagency in character, State Department officials and American allies were not adequately consulted. That leaves much to do for a new administration in improving a conceptually sound, but also rather troubled, process of global posture realignment.

A hang-out for NeoConservatives under the label “Good Democrat” in support of the Obama administration.

Founded in 2007, the Center for a New American Security (CNAS) is widely considered to be an important source of national security and military analysis for the Obama administration, particularly with respect to counterinsurgency strategy (COIN). Described by the Los Angeles Times as “a haven for hawkish Democrats,”[1] CNAS calls itself an “independent and nonpartisan research institution” that aims to engage “policymakers, experts, and the public with innovative fact-based research, ideas, and analysis to shape and elevate the national security debate.”[2]

CNAS’ leading role in Obama-era policy-making was highlighted when in 2009 the organization’s cofounders–Michele Flournoy and Kurt Campbell–as well as several other CNAS scholars were tapped to serve in the administration.[3] Flournoy became the undersecretary of defense for policy, the same post held by the controversial neoconservative figure Douglas Feith during the first George W. Bush administration. Campbell was tapped to serve as the State Department’s lead Asia expert.[4]

Several CNAS principals were also named to the Defense Policy Board,[5] the in-house Pentagonadvisory board which, under the leadership of former chair Richard Perle, played a role in promoting an expansive “war on terror” during the Bush administration.[6]

Michael O’Hanlon is the director of foreign policy research at the centrist Brookings Institution in Washington. A senior fellow with the think tank’s “Center for 21st Century Security and Intelligence,”[1] O’Hanlon is a prolific writer and frequently cited military analyst who often collaborates with counterparts at neoconservative think tanks, including the American Enterprise Institute (AEI). O’Hanlon supported the Iraq war, backed troop escalations in Iraq and Afghanistan, and has supported the advocacy campaigns of pressure groups like the notorious Project for the New American Century.

More recently, O’Hanlon has pushed for U.S. intervention in Syria’s civil war, writing in a May 2013 USA Today op-ed that President Barack Obama would “have to act” if allegations that Bashar al-Assad’s forces had used chemical weapons were confirmed, adding that he “tend[s] to support” calls to “arm the rebels, establish a no-fly zone,” and “set up areas for internally displaced persons and refugees.” However, he cautioned that such action should not be undertaken in the absence of a fully developed “exit strategy,” offering the resolution of the conflict in Bosnia-Herzegovina–in effect, an eventual “soft partition” of Syria along ethnic and religious lines–as a model.[2]

Such a plan, O’Hanlon argued, would “imply a number of U.S. peacekeepers on the ground, perhaps comparable in number to the 20,000 who began the job in Bosnia in 1995.” He said the deployment should only occur if Arab countries and Turkey pledge to provide a majority of the needed troops.[3]

The drama features fists, threats and water throwing, and it risks destabilizing the country.

KIEV — Conflict at the highest levels of the Ukrainian government has become so sharp in recent weeks that the battles have turned public and the fights have gone viral, as the jostling for power undermines efforts to deal with war, corruption and a nose-diving economy.

The tensions tearing apart Ukraine’s ruling classes was full display at a meeting of Ukraine’s reform council, which turned into a shouted exchange among top officials.

“You are an asshole and clear out of my country,” responded Avakov, throwing a full glass of water in his direction.

Reduced to the role of spectator, Petro Poroshenko, Ukraine’s president and the man who appointed Saakashvili, the former president of Georgia, as governor of Odessa, had reason to hold his head in his hands.

The spat showed Poroshenko was unable to command authority among his colleagues, who are engaged in an often literal fight to the political death. They’re warring over whether Prime Minister Arseniy Yatstenyuk, whose popularity has dropped to the low single digits, should stay, and what role, if any, Saakashvili should play at the top of Ukrainian politics.

October 31, 2015
The U.S. embassy in Tbilisi said in a statement on leaked wiretapped recordings of Saakashvili that “it is unacceptable for anyone to advocate for violence in politics.” Saakashvili said next day in a written statement that it was “deeply immoral to take this type of `conversations’ as a credible source, furthermore to comment on their content.”

“The head of the Georgian government expresses his concern that Mikheil Saakashvili’s phone conversation with former secretary of Georgia’s National Security Council and general director of Rustavi 2 TV contains statements directed against current government of Georgia, as well as specific calls for anti-state and violent actions,” the Georgian PM’s office said in a statement.

“The PM stresses that such actions do not correspond friendly relations between Georgia and Ukraine. The PM also notes that such calls may pose threat to Georgia’s security and stability; he also requested the President of Ukraine to take interest in this issue,” PM’s office said.

Georgia’s Foreign Ministry summoned on October 30 Ukraine’s chargé d’affaires Georgii Nazarov to complain over remarks made by Saakashvili in the leaked recordings.

Why Elect a Do-Nothing President?