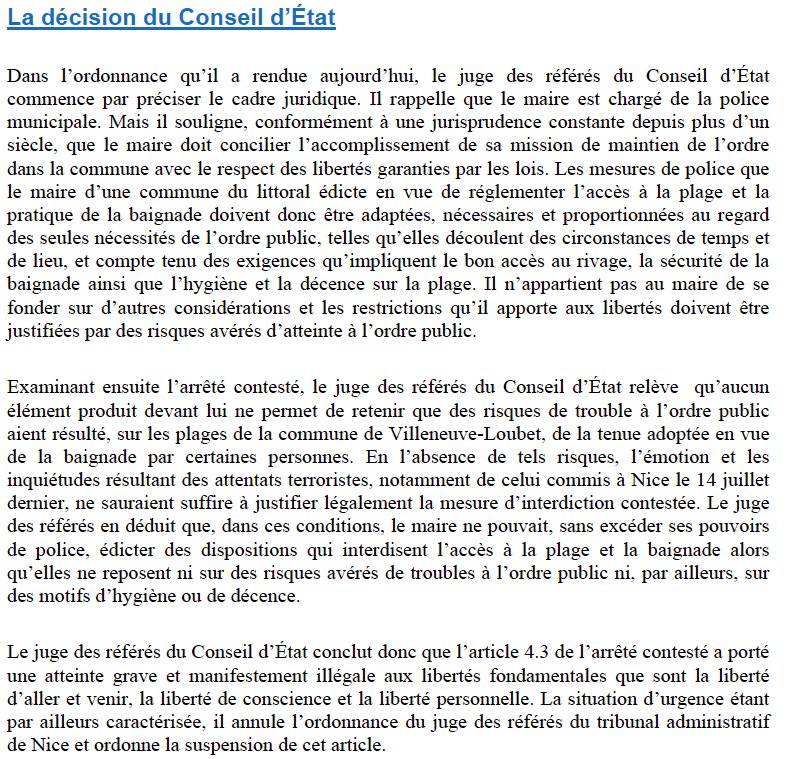 France’s highest administrative court has suspended a ban on the burkini in a test case brought by human rights groups, pending a definitive ruling.

The ruling from the state council suspends a single ban in the southern town of Villeneuve-Loubet, near Nice, but is likely to set a precedent for other towns that have prohibited the full-body swimwear on their beaches.

Under the French legal system, temporary decisions can be handed down before the court takes more time to prepare a judgment on the underlying legality of the case.

The bans – made in the form of mayoral decrees – followed the Bastille Day attack in Nice and the murder of a priest in Normandy.

They do not explicitly use the word burkini but instead ban “beachwear which ostentatiously displays religious affiliation”, citing reasons such as the need to protect public order, hygiene or French laws on secularism.

At a hearing before the state council on Thursday, lawyers for the rights groups in the Villeneuve-Loubet case argued that the bans were feeding fear and infringe on basic freedom.

A lower court had ruled on Monday that the Villeneuve-Loubet ban was necessary to prevent public disorder.

The row over burkinis has intensified after a woman in a headscarf was photographed on a beach in Nice removing a long-sleeved top while surrounded by armed police.

The city banned the burkini on its beaches last week, following about 15 seaside areas in south-east France where mayors had done the same.

The bans have divided France’s government and society and drawn anger abroad. The former president, Nicolas Sarkozy, used the first of rally of his campaign for the 2017 election to call for a nationwide ban on the swimsuits, while the Socialist government has become divided, with the prime minister and one of its leading feminist voices at cabinet-level taking opposing positions.

○ Quite Depressing Really, Obama and the ISIS Crisis
○ Burkini – what’s all the fuss about? – BBC – 6th April 2016

Good for the French court. That video of male French police demanding women take clothes off was really creepy.

Hmm, you guilt trip the West for enforcing their national norms, but make excuses for Muslims for enforcing THEIRS at home and abroad.

I know a lot of French liberals who DO NOT LIKE this special pleading.  They died over this issue for centuries and don’t want a replay.

In a secular society, one’s personal apparel should not be an national issue.  If secularism becomes a state religion, then enforcing a dress code in either France or Iran, to preserve public order, becomes parallel actions.   I understand the France’s fight against the Church and the history of the State asserting itself over religion in the public sphere;  but this and the headscarf ban is taking it too far. As an American, France’s public balance of the state vs. individual is sometimes confusing.  Liberty and chaos are always on a knife’s edge.  A few years ago when there were… Read more »

I know, I know, the knee-jerk liberal response is to condemn this.  And there is good reason. BUT, what was the FIRST thing that Muslim reformers who wanted to modernize their societies did?  Got the women out of purdah.  Look at the 50s and 60s. Only a few sources are brave enough to be politically incorrect and connect the  hazing that Western women are receiving from Muslim street youths brought up in purdah traditions.  Lots of liberal dads in France right now are furious. I know a couple. Religion is never satisfied will small bites, as we have witnessed over… Read more »

The Voice In The Wilderness
Reply to  RidgeCook

RidgeCook
Reply to  The Voice In The Wilderness

At a topless beach.