Mark Zuckerberg of Facebook As Censor In Chief – Crazy Moron .

Not once but twice, the official Aftenposten newspaper got hit by removal, warning and sanction. No editors, but a Facebook algoritm was to blame, says goeroe Mark. In the meantime he manages to cut critics of Israel and human rights activists in the Gulf states. At last, the 1984 scenes have come to pass … be sure to maintain all the digital social sites for contacts.

Norway’s largest newspaper has published a front-page open letter to Facebook CEO Mark Zuckerberg, lambasting the company’s decision to censor a historic photograph of the Vietnam war and calling on Zuckerberg to recognize and live up to his role as “the world’s most powerful editor”.

Espen Egil Hansen, the editor-in-chief and CEO of Aftenposten, accused Zuckerberg of thoughtlessly “abusing your power” over the social media site that has become a lynchpin of the distribution of news and information around the world, writing, “I am upset, disappointed – well, in fact even afraid – of what you are about to do to a mainstay of our democratic society.” 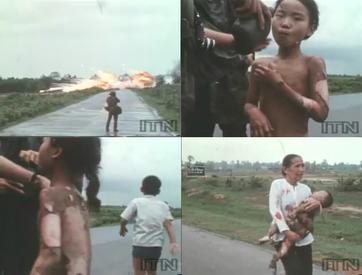 The controversy stems from Facebook’s decision to delete a post by Norwegian writer Tom Egeland that featured The Terror of War, a Pulitzer prize-winning photograph by Nick Ut that showed children – including the naked 9-year-old Kim Phúc – running away from a napalm attack during the Vietnam war. Egeland’s post discussed “seven photographs that changed the history of warfare” – a group to which the “napalm girl” image certainly belongs.

Egeland was subsequently suspended from Facebook. When Aftenposten reported on the suspension – using the same photograph in its article, which was then shared on the publication’s Facebook page – the newspaper received a message from Facebook asking it to “either remove or pixelize” the photograph.

“Any photographs of people displaying fully nude genitalia or buttocks, or fully nude female breast, will be removed,” the notice  from Facebook explains.

Before Aftenposten could respond, Hansen writes, Facebook deleted the article and image from the newspaper’s Facebook page.

Election Results: Obama Finds Out Progressives Do Have Teeth!

A Big Yawn Over Rove/Newsweek Story?