Digging dirt on candidates during the primary and presidential race for the White House is nothing new or out of the ordinary. In an age of globalisation, we have found out the British were involved in both the Brexit campaign and the Trump campaign inside the U.S. We’ve read a lot about Republicans hiring companies to find dirt on Donald Trump and even offered same dossier to Democrats when it became a two horse race. The Clintons were themselves running a tough campaign and left no stone unturned.

During the 2015 Israeli election for the Knesset and Bibi Netanyahu trying to hold onto power, the Obama administration worked inside Israel to undermine the chances of Barack Obama’s nemesis. That’s today’s politics which has moved on the international stage. Influencing the electorate can be done in many ways and with Internet and social media this is an unstoppable trend. Get used to it, other nations have managed … or not but we’ll never know the truth with all misinformation, propaganda, fake websites and social media accounts.

Welcome to the 21th century, the era reaping the fruits of globalisation and climate change.

Trump Jr. admitted that he took a meeting with a Kremlin-connected Russian lawyer with the expectation that she would provide him with information damaging to Hillary Clinton. He brought along Paul Manafort, Trump’s campaign manager at the time, and Jared Kushner, Trump’s son-in-law and a top adviser.

JUST IN: Donald Trump Jr. responds to reports that he met with Kremlin-linked lawyer during campaign pic.twitter.com/5mqRX38Wio

Trump Jr. said the meeting was set up by “an acquaintance I knew from the 2013 Miss Universe pageant.” The Washington Post revealed that acquaintance was music publicist Rob Goldstone.

Goldstone, in turn, told the Post that “he had arranged the meeting at request of a Russian client.” He refused to disclose the name of the client, but Goldstone is the manager for a Russian pop singer named Emin Agalarov.

Agalarov’s father, billionaire developer Aras, sponsored the 2013 Miss Universe pageant. They’ve both been quite public about their ongoing relationship with Donald Trump and Donald Trump Jr.

Trump appeared on stage with both Agalarovs at a press conference after the Miss Universe competition. 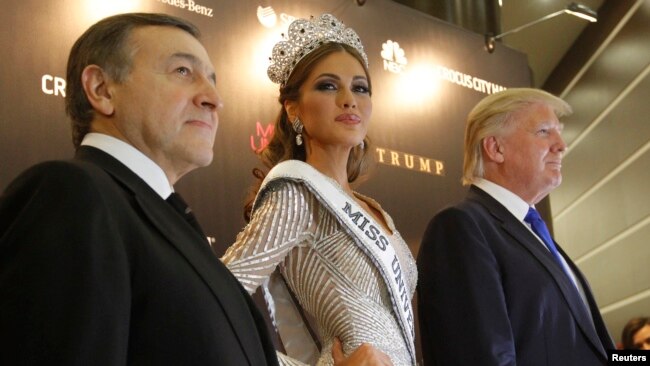 When Putin was unable to meet with Trump during the Miss Universe pageant, he sent a gift to Trump instead.

[The winner is … politically correct? – Oui]

The Caging of America

Not The Onion Headline of the Day