Speaking of COLLUSION by employing a foreign agent, or worse to have direct contact with Israeli dignitaries during the transition period as President-elect …

[Update-1] Journalist Marcy Wheeler tweeted this morning: “The big news is that Flynn lied
to FBI about [Israeli] settlements vote. This is not just RU [Russia], folks. Never has been.”

…
It’s clear now that it’s all one panic.

The big news is that Flynn lied to FBI about Palestinian settlements vote.

This is not just RU, folks. Never has been.

Egypt had circulated the draft late on Wednesday, demanding Israel halt settlement activity in the occupied West Bank, and a vote was initially scheduled for Thursday.

But it requested that the resolution be postponed after Israel launched a frantic lobbying effort, including calls from Israeli Prime Minister Benjamin Netanyahu for the US to use its veto power at the Security Council to block the resolution.

The US should veto the anti-Israel resolution at the UN Security Council on Thursday.

The stain of shame will be hard to erase pic.twitter.com/G22BVPS9Z9

Were other Trump aides lobbying for Israel illicitly alongside Michael Flynn? | The Guardian |

The guilty plea entered on Friday by Donald Trump’s former national security adviser, Michael Flynn, has raised critical new questions not only about the relationship between the Trump team and Russian officials – but also whether Flynn and other members of the Trump transition team were improperly lobbying on behalf of Israel.

Among the statements about which Flynn has admitted lying to the FBI is his depiction of a conversation with the then Russian ambassador, Sergey Kislyak, relating to the run-up to the controversial December 2016 UN security council resolution 2334 on Israeli settlement building – which passed after the Obama administration abstained.

Israel, it was reported widely at the time, had been lobbying the team of then President-elect Trump in an attempt to derail the vote.

And according to the charge sheet against Flynn one of the false statements he has admitted giving to the FBI, was his denial that he had spoken to Kislyak on 22 December 2016 asking Russia to delay the vote on the UN resolution.

So the country that influenced US policy through Michael Flynn is Israel, not Russia. But Flynn did try to influence Russia, not the other way around. Ha-ha. This is the smoking gun? What a farce. https://t.co/VLw3wOLCCG pic.twitter.com/cZ3JBUxd4s

PM May: Replica of the Thatcher – Reagan Era

British Prime Minister Theresa May condemned a blunt speech this week by Secretary of State John F. Kerry on the state of the Israeli-Palestinian conflict, an unusual move that boosted Britain’s relations with the incoming Trump administration at the expense of President Obama.

The rare diplomatic spat between Britain and the United States, which was met with surprise by the State Department, highlighted the fast-collapsing influence of the lame-duck White House. It also pointed to a vast reordering of international affairs expected after Donald Trump takes office in three weeks, as U.S. allies position themselves to curry favor in the new order.

The transatlantic split was particularly unexpected given that May’s government acted as a key broker between U.S. and Palestinian interests ahead of a U.N. Security Council vote last week to declare Israeli settlement construction “illegal.” British diplomats worked as go-betweens in shaping the measure to ensure that the language was acceptable to the United States, Britain’s Guardian and Israel’s Haaretz newspapers reported this week.

John Kerry sits down with Andrea Mitchell of NBC News

Theresa May has distanced the UK from Washington over John Kerry’s condemnation of Israel, in comments that appear to be designed to build bridges with the incoming Trump administration.

However the US state department last night reacted with some bluntness to May’s statement.

A spokesperson said: “We are surprised by the UK Prime Minister’s office statement given that Secretary Kerry’s remarks–which covered the full range of threats to a two state solution, including terrorism, violence, incitement and settlements–were in-line with the UK’s own longstanding policy and its vote at the United Nations last week.”

The statement also said: “We are grateful for the strongly supportive statements in response to Secretary Kerry’s speech from across the world, including Germany, France, Canada, Jordan, Egypt, Turkey, Saudi Arabia, Qatar, the United Arab Emirates and others.”

This morning, former Trump national security advisor Michael Flynn pleads guilty to lying to the FBI [NYT] about his efforts with Jared Kushner to torpedo a United Nations Security Council resolution criticizing Israeli settlements. These included lobbying the Russian ambassador to help in this campaign by delaying or cancelling a vote on the matter. Earlier today, I published a new column in Middle East Eye (MEE) which outlined the case against Kushner.

…
Here’s how the Times laid out the context:

Mr. Mueller’s investigators have learned through witnesses and documents that Prime Minister Benjamin Netanyahu of Israel asked the Trump transition team to lobby other countries to help Israel, according to two people briefed on the inquiry. Investigators have learned that Mr. Flynn and Mr. Trump’s son-in-law and senior adviser, Jared Kushner, took the lead in those efforts. Mr. Mueller’s team has emails that show Mr. Flynn saying he would work to kill the vote, the people briefed on the matter said.

Bloomberg elaborates on this:

One transition official at the time said Kushner called Flynn to tell him he needed to get every foreign minister or ambassador from a country on the U.N. Security Council to delay or vote against the resolution. Much of this appeared to be coordinated also with Israeli prime minister Benjamin Netanyahu, whose envoys shared their own intelligence about the Obama administration’s lobbying efforts to get member stats [sic] to support the resolution, with the Trump transition team.

Use of the term “intelligence” in the above passage implies that the Israelis knew of the Obama administration efforts in support of the resolution through surveillance or communications intercepts. As Eli Lake is a journalist who is exceedingly close to Israeli officials, including intelligence operatives, this strengthens the notion that he is aware surveillance may’ve been involved in this case. In the past, we’ve heard that both the U.S. and Israel bugged each other regarding the negotiations for the P5+1 Iran nuclear deal. This might indicate such efforts were ongoing.

Knowledge that Israel was spying on the Obama administration during this period might reflect even more negatively on the Trump machinations against the resolution before he assumed office. It would strengthen the notion that official U.S. interests and Israelis interests were totally at odds in this case. That in turn strengthens the notion of a Logan Act violation.

Aligned with Saudi Arabia and Egypt against Qatar, sponsor of the Muslim Brotherhood …

From my earlier diary …

Intelligence leaks have been published in Louise Mensch (Rupert Murdoch) blog/social media and the Wall Street Journal (Rupert Murdoch). Forbes puts blame on the Hillary Clinton campaign team, I do not! The UK and USA Intelligence agencies are quite capable to initiate an 21st century coup d’état via social media. The IC has newly attained field experience across the states of the Arab Uprising and the Ukraine.

In the Ukraine and Baltic States the world witnesses the second global cyber warfare. With limited military involvement using PsyOps techniques to motivate public opinion. To move the masses in a direction the politicians seem not able to accomplish.

I have speculated about a possible role of Israel to defeat the Democrats in the Presidential election … tit-for-tat. An outline is becoming more defined through the smoke and mirror of intelligence spooks. Follow the flow of money into the pockets of Republican candidates. Israel has done it before in US election history.

Magareth Thatcher: “Ladies are not for turning.”

○ Flynn and Kislyak’s Israel Talks Were a Bigger Deal 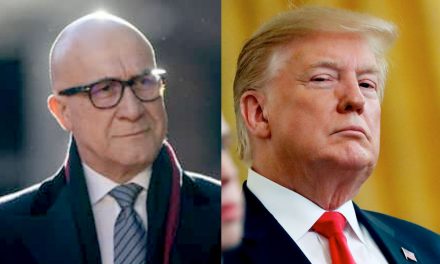