Jerusalem: Trumpian Clarity On US Bias for Israel

It’s unfair to damn Trump for killing the two-state solution.

The EU was never likely to take the bait, as Netanyahu must have known — or at least realised after his encounter with Emmanuel Macron in Paris. After all, none of the 14 other members of the UN Security Council backed the US stance last Friday, prompting US ambassador Nikki Haley to bash the UN yet again for its `bias’ against Israel — just because it routinely violates UN resolutions and universal standards of decency.

It’s worth noting that when Trump was still only president-elect a year ago, his aides Jared Kushner and Michael Flynn sought to importune other nations, notably Russia, to forestall a UN wrist-slap for Israel that the Obama administration refused to veto. Fortunately, the ploy failed.

In a somewhat different context, it was a hopeful sign that Haley did not resort to complaints of bias against her president when confronted with questions relating to accusations of sexual transgressions by Trump, instead upholding the right of his accusers to be heard — even though the White House has labelled the women concerned as liars.

Netanyahu, meanwhile, has been busy perpetrating the obvious lie that Jerusalem — a city holy to Jews, Christians and Muslims alike — has been “the capital of the Jewish people” for 3,000 years. Without a break.

Identifying the Israeli state and Zionist aims with “the Jewish people” inevitably appeals to anti-Semites, and has always done so in Europe, where the most ardent Israel supporters are to be found among governments to the east of the continent, all too often coinciding with anti-Semitic notions, although they tend to be overshadowed by Islamophobia [ … and xenophobia, homophobia – Oui]. 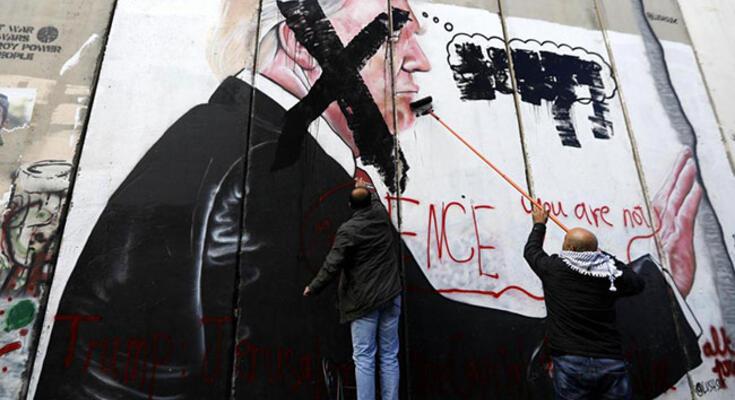 Representing 1,5 billion Muslims across the globe …

The 57-member Organization of Islamic Cooperation (OIC) has recognized East Jerusalem as the capital of the State of Palestine and invited other countries to follow suit. The organization’s decision, reached during an extraordinary summit in Istanbul on Dec. 13, counters the U.S.’s recognition of Jerusalem as the “undivided” capital of Israel. 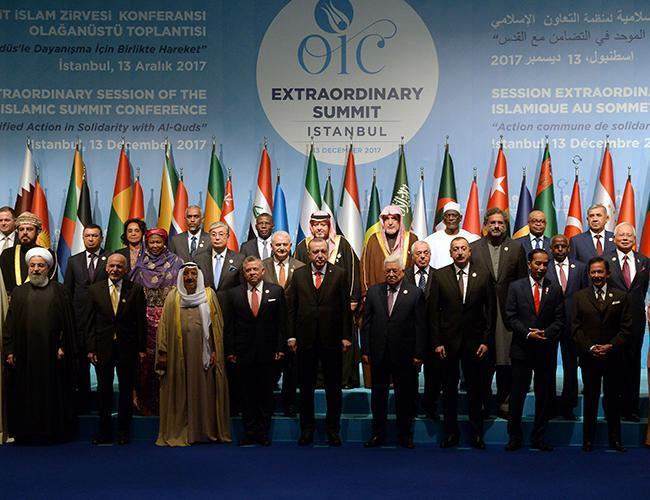 The 23-article Istanbul Declaration expressed full solidarity with Palestine and “rejected and condemned in the strongest terms the unilateral decision by the President of the United States America recognizing Al-Quds as the so-called capital of Israel.”

Trump’s move is an “attack on the historical, legal, natural and national rights of the Palestinian people, a deliberate undermining of all peace efforts, a move to extremism and terrorism, and a threat to international peace and security,” read the communiqué.

“Claims by National Security Advisor (H.R.) McMaster, who should be well aware on how our country has been fighting terrorism and all sorts of radicalism, are nonfactual, astonishing, baseless and unacceptable,” the Foreign Ministry said in a written statement on Dec 13.

The statement came after McMaster accused Turkey and Qatar of funding extremist Islamic ideologies during a panel held at a think tank in Washington on Dec. 12. McMaster serves as the national security advisor of President Donald Trump.

McMaster reportedly referred to Saudi Arabia’s support for some of these organizations “decades ago” but singled out Qatar and Turkey as main supporters at present.

US national security adviser: Qatar and Turkey are new sponsors of radical ideology | The National |

The falsehood comes in that phrase, “…as the ancestral Jewish homeland”. What this means is that the group of people who now identify as Jews, whether currently living in Israel or outside it, constitute a nation, and the very same nation as the people who lived in the ancient kingdom of Judea; therefore, in establishing the Jewish state of Israel, they are merely returning to take possession of what has always been rightfully theirs.

But can anyone really take this claim seriously? Judaism is a religion, and what Jews today share with the ancient Judeans is this religion. My roots can be traced back to Eastern Europe, and earlier than that is all speculation and conjecture, nothing that can compete with the Palestinians’ actual residence on the land for the past hundreds of years.

Shlomo Sand, in The Invention of the Jewish People, has forcefully argued that the very idea that Jews, as a collective, constitute a nation, is a very recent idea, largely coinciding with the rise of Zionism. As someone who was raised Orthodox, I’m not sure I totally agree with him, but this only reinforces my point. It has for a long time been part of Jewish religious doctrine that we are God’s people, so if that’s so, we have to be identifiable as a separate nation. We also have religious laws about who can count as a Jew that are mostly biologically based. But this is religious dogma, not history and not political reality.

In fact, not too long ago, during the period of Jewish emancipation in Europe, it was the anti-semites who emphasized that Jews were a nation apart, and it was advocates for emancipation who argued that Jews were integral to the nations in which they lived but just happened to have a minority religion. So no, Bret Stephens [NYT Op-Ed], Jerusalem is not my homeland, nor my “birthright”. I have no more of a right to claim Jerusalem than any Catholic in the US has to claim Rome.

○ Keyword Bret Stephens @BooMan
○ Chuck Hagel, Knifed in the Back by the Lobby
○ Chuck Hagel and His Enemies | The New Yorker – Dec. 2012 |

These Men Are Cowards, Donny