The Interior Ministry on Friday ordered to close down operations of Radio Mashaal [cached], a Pashto language broadcaster linked to the US-funded Radio Free Europe, on recommendations of the Inter-Services Intelligence (ISI).

A notification issued by the ministry, directed towards Islamabad chief commissioner and police chief, said that as per an ISI report, the radio airs programmes “found against the interests of Pakistan and in line with hostile intelligence agency’s agenda”.

It said that the four main themes of the programmes aired by the service include “portraying Pakistan as a hub of terrorism and safe haven for militant groups, propagating Pakistan as a failed state in terms of providing security to its minorities and Pakhtuns, presenting the Pakhtuns of Khyber Pakhtunkhwa (KP), Federally Administered Tribal Areas (Fata) and Balochistan as being disenchanted with the state, and distorting facts to incite people against state and its institutions”.

The ministry, thus, decided to close down the radio’s regional office located in Islamabad and terminate its activities.

The Czech-based Radio Free Europe first began its services in Fata in 2010 by the name of Radio Mashaal with an aim of providing “an alternative to the growing number of extremist radio stations in the region”.

Transitions (TOL) is a nonprofit organization established to strengthen the professionalism, independence and impact of the news media in the post-communist countries of Europe and the former Soviet Union. We do this through a combination of journalism and media training programs, and the publication of Transitions Online magazine.

TOL was established in April 1999, the month after the publication of the final issue of its print predecessor, Transitions magazine. (The print magazine was first published in 1994 by the Open Media Research Institute, a joint venture between Radio Free Europe and the Open Society Institute.) Four of the former print magazine’s staff members established Transitions Online as a means of keeping the widely respected, cross-border coverage of the magazine alive.

Our training activities would not be possible without the support of our donors, but we also rely on several streams of “self-generated” income.

Just today I watched this hilarious report of Fake News presented in a serious setting of the European Parliament … a poor attempt to enforce censorship. LOL

The EU has its own fact-check service. This EU vs Disinfo recently mentioned two Dutch-language publications – from the right-wing GeenStijl websites and TPO – to fake news. To the anger of both sites. Should an EU service check the press?

“We are on our way to a media-censoring EU”, writes Bas Paternotte on his right-wing news and opinion site TPO. “This is a downright frightening development.”

Paternotte has just found out that a TPO article is included in the list of fake news messages that an organization that works under the EU flag has drawn up. In the November 2015 article TPO journalist Chris Aalberts wrote about Ukraine: “Impartial media do not exist in the country, oligarchs have enormous power, a resistance army that killed 100,000 Polish Jews in the Second World War is still worshiped.”

Not true, the organization concludes on the website EU vs. Disinfo, with summary explanation: “This article seems to be aimed at deteriorating the image of Ukraine prior to the Ukrainian referendum.”

[Note: the EU task force came to its conclusion about Dutch “misinformation” in five media reports. Four of the five were source by an NGO named – Promote Ukraine]

Seems to me the EU Task Force has just promoted … FAKE NEWS! 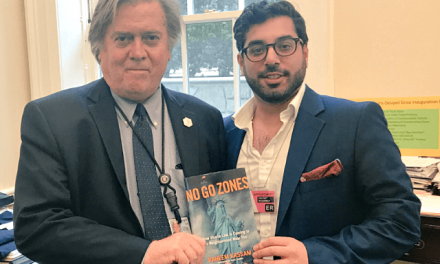 National Review and the Black Panthers

The Media is Always Biased

The Voice In The Wilderness (@the-voice-in-the-wilderness)