A Day for Iraq War Hawks to Say They’re Sorry

Sinan Antoon is an Iraqi-American novelist who publicly opposed the invasion of Iraq that was initiated fifteen years ago today. He has a good piece in the New York Times. You should read it. Here is how it concludes:

No one knows for certain how many Iraqis have died as a result of the invasion 15 years ago. Some credible estimates put the number at more than one million. You can read that sentence again. The invasion of Iraq is often spoken of in the United States as a “blunder,” or even a “colossal mistake.” It was a crime. Those who perpetrated it are still at large. Some of them have even been rehabilitated thanks to the horrors of Trumpism and a mostly amnesiac citizenry. (A year ago, I watched Mr. Bush on “The Ellen DeGeneres Show,” dancing and talking about his paintings.) The pundits and “experts” who sold us the war still go on doing what they do. I never thought that Iraq could ever be worse than it was during Saddam’s reign, but that is what America’s war achieved and bequeathed to Iraqis.

Americans aren’t accustomed to calling their foreign policy blunders “crimes,” nor do they send their failed foreign policy leaders into exile the way the Ancient Greeks used to do. Maybe we should do both of these things. Or maybe we should learn more about the Ancient Greek word “hubris,” which meant “excessive pride toward or defiance of the gods” which leads to a downfall for the protagonist.

In modern usage, “hubris” is better defined as “over-confidence,” which doesn’t quite capture the immorality of invading Iraq based on false premises and bad faith, leading to massive region-wide humanitarian, political and sectarian crises.

I was encourage to see John Cole whip himself like a penitent for being wrong about literally everything in the lead-up to the Iraq War. That’s a man who knows how to act when he’s advocated something that resulted in complete disaster. But John Cole was a cheerleader, not a policymaker. He didn’t make the decisions that led to the downfall of our moral credibility and the entire Middle East.

Finally, the people who let these people off the hook cannot complain that they’ve made a comeback.

Tuesday’s Child is Full of War

I will add on John Cole’s behalf that he also served in the military, so his opinion was definitely coming from his own experience as such. And coming forward now to admit he was wrong and express regret for his position is noteworthy.

The wars were money making machines and Bush, Cheney and their group of bloodthirsty mongrels made sure their interests were fulfilled. They will never apologize to this country or any other. They saw an opportunity to make money and nothing was going to stop them.

It always comes down to greed.

If there was any justice in the world, everyone in the inner circle of the Cheney administration would stand in the Hague and be judged for their crimes against humanity.

[with apologies to Otis]: Cheney et al. should be

Those war criminals of the Iraq war and occupation can “say they are sorry” while standing on the gallows, waiting for the trap to open.

Or they can suck on a bullet.

There was never going to be a reckoning over Iraq because it would have cut way to deep into the countries established powers centers and it would damn the entire 2004 Republican Presidential vote. Instead, the Media intentionally struck the entire incident (and it’s associated Presidential administration) from the public record the moment Obama was swore in. They did it so hard that by 2010, polls had small majorities insisting President Obama, as President, had started the conflict. The Tea Party turned 2004’s Mission Accomplished, Fuck Yeah! loud and proud conservative voters into a-political humble citizens concerned about the President’s… Read more »

I think it’s significant that this was actually printed in the NY Times. If you remember the NY Times during the Iraq War.
https:/fair.org/home/nyts-journalistic-detachment-before-iraq-war-is-detached-from-reality

But why would they do that when they’re busy facilitating more war in another region: 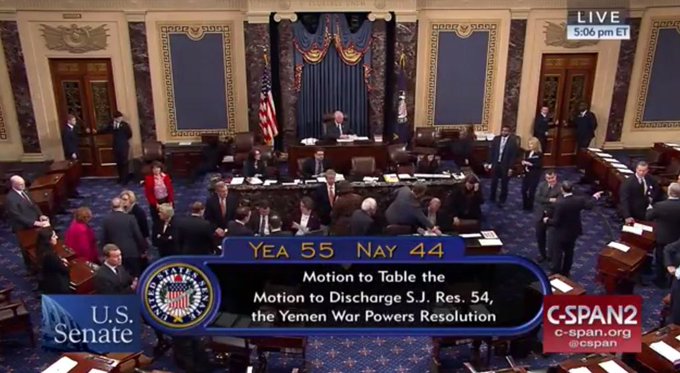 That continuing catastrophe has been responsible for the flood of immigrants to Europe (really refugees) over the last decade-plus at whose expense the fascists are getting so much political mileage.

It was a gift to world fascism that keeps on giving.  (For Cheney and Co., a win whether the military enterprise foundered or not.)

The Europeans must be so miffed with America claiming that they aren’t paying their way. They’re paying the tab now for U.S. adventurism. Then America throws up this ignorant clown to continually bray and berate them about how the US pays for everything. Egad.

They broke it. They sure haven’t owned it. Or been forced to own it.

I used to blog about that damned war a lot. Got into blogging largely as a means of connecting with others who were anti-war. Granted a good number of anti-war bloggers turned out to be crackpots or worse, but the folks who were for what turned into a 21st century Children’s Crusade should have long ago been taken to the woodshed for their defense of the indefensible. The damage the US and its allies did to the Middle East and central Asia will never be undone. In its wake the conditions for ever more radical terrorist outfits and ever more… Read more »

I agree with you about the “accelerant’ that the Iraq War provided for the prolonged terrorism campaign and civil war in Iraq. And especially liked the “Childrens Crusade” allusion. But, as someone who’s worked in the Middle East off and on for more than 15 years, Bush/Cheney just stupidly blundered into an increasingly dangerous Sunni-Shi’ite conflict that began in 1979 with the Khomeini Revolution and Khomeini’s attempt to export the Iranian Revolution abroad. Iraq, like Lebanon was seriously cleaved between the world’s majority Sunnis (but minority in Iraq) and the world minority Shi’ites (but majority in Iraq). I have to… Read more »

Heart of the Rockies
Reply to  astamari316

Didn’t we accelerate radicalism in Iran with our overthrow of the democratically elected government of Mossadeq and installation of the Shah?

The Greeks called hubris a hamartia, a tragic flaw. I think “over-confidence” is a bit mild for a hamartia.

Just on a personal note, the Iraq war was the seminal issue that publicly marked me as the crazy black sheep liberal in my very Republican family.  I still remember the absolute incredulity and shock on my mother’s face when I told her I thought it was the most disastrous, wrong headed, and likely criminal foreign policy decision in decades. I caught shit from a thousand different directions for years for my “unpatriotic” and “un-American” lack of support for this clusterfuck. I could not escape the derision for years. Now this whole thing, including their blind support of a war… Read more »

I had a very similar experience.

By that point I lived across the country, but from 2002-2005 Thanksgiving/Christmas were condescending “Oh you silly, simple minded, liberal” shit-eating grin lectures from my loud and proud Bush supporting immediate family….

…however, by 2006 politics were NOT LONGER TO BE DISCUSSED AT THE TABLE, PERIOD, FULL STOP! The most I got was in 2007 my brother mumbling something about “I guess all politicians are just a corrupt.” Yet, that same brother’s son attended President Stupid’s inauguration.

…however, by 2006 politics were NOT LONGER TO BE DISCUSSED AT THE TABLE, PERIOD, FULL STOP!

Yeah, in my family that’s about where things are at now as far as Trump goes.  For a while it was “You have your opinion, and I have mine”.  Now it’s, “I just don’t like talking about politics. It’s all just a bunch of hate and name calling”.

Gee, I wonder what happened to change their mind?

Given how many times Saddam Hussein violated the “no fly zone”, I think it was a matter of time before we went to war again in Iraq.  That said using 9/11 to justify it was wrong and not to mention grotesque

Still the biggest mistake wasn’t the war itself but rather de-Baathification, truly one of the stupidest foreign policy mistakes ever in US history.  Most of the civilian deaths and the rise of ISIL can be traced to that stupid and most likely criminal decision.  Paul Bremer should be spit on any time he shows his face in public.

Of course they would have to actually be sorry. Or have any doubt about what they did.

The best thing about being evil is never having to even feel like you are sorry.

“Impeachment is off the table.”

Look forward, not back…

Ergo, now we have a Chief Torturer poised to be the head of the CIA.

Excellent post, BooMan. But I can’t help but point out that, according to a PEW poll in 2003, the Iraq war was supported by 72% of Americans.  Even if you add up all Republicans and the ultimate decision makers who made it happen, you come far short of such a vast number. The guilt, alas, lies with the opinion makers, the ignorant, the disengaged, pro-war Dems and Independents, and, sadly, the country as a whole. Democracy, such that it is, spoke loud and clear in 2003 and it was emotional and it was irrational and it was ugly. Tom Friedman… Read more »

You write: But I can’t help but point out that, according to a PEW poll in 2003, the Iraq war was supported by 72% of Americans. First of all…do not believe “the polls.” They are owned and controlled by various factions of the corporate-owned, PermaWar-oriented Permanent Government. Also: The guilt, alas, lies with the opinion makers, the ignorant, the disengaged, pro-war Dems and Independents, and, sadly, the country as a whole. Yes. Just exactly where the guilt lies today. Plus of course with the corporate interests that make huge money from the Permanent War machine. Solution? I have none. One… Read more »

At the birth of the French republic, the “moderate” Girondins pushed aggressively for the first of what would be seven catastrophic wars, stretching over twenty years. Even when they were being rolled up to the guillotine, they never apologized.

I personally despise Paul Wolfowitz the most during the Iraq debacle (well except for Darth Cheney) dating back to his days as ambassador to Indonesia in the 1980s. He would have been an utter disaster had it not been for his then wife Claire who was a scholar of Javanese culture (unsurprisingly no longer married to that sleaze ball). He is a great example of someone who continually fails upward, a decidedly political conservative characteristic.

The Democrats had a chance to hold Bush, Cheney et al accountable once they took over Congress and chose not to. Instead, they wanted to “look forward, not backward.” The intent is positive but this was a case where people needed to be held accountable, if for no other reason to send the message that there will be accountability but also to learn so we,as W once said, “don’t get fooled again.” I fear this has set a precedent where the expectation for dems is that when in power they don’t use  it.  It’s been used to delegitimize the Democrats… Read more »

15 Years Ago, America Destroyed My Country

I never thought that Iraq could ever be worse than it was during Saddam’s reign, but the 2003 US invasion changed that