Fifteenth Anniversary: Fragments of writing from March 2003 (with commentary) 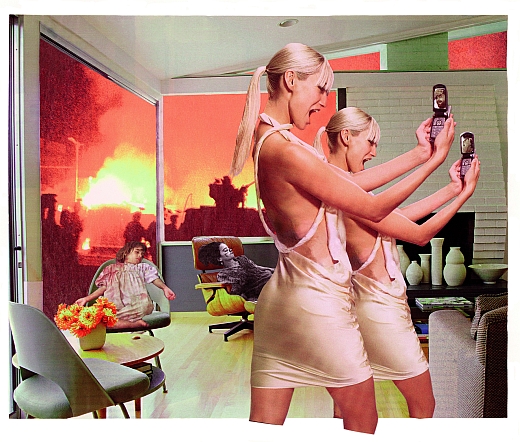 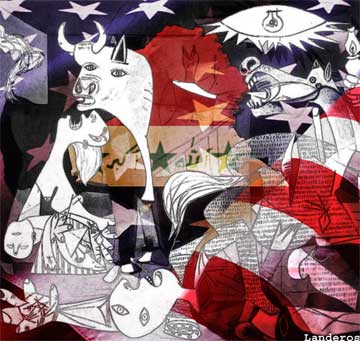 Image caption: Falluja/Guernica, 2004 by Rob Landeros (found at Gernika)
What can I say? Time flies. fifteen years seems like a lifetime in many respects. And yet here we are, memorializing the fifteenth anniversary of a mostly forgotten war that devastated the lives of so many in Iraq. Since many of the forces of darkness who advocated that particular debacle in the desert seem to see fit to advocate “regime change” and “humanitarian intervention” elsewhere in the Middle East, Northern Africa, and Central Asia, North Korea, and elsewhere across our aching planet, and as so many choose to remain rather silent, it is worth a reminder that there were voices of resistance – in rather substantial numbers back then (as the sheer number of protesters should have indicated).

Although I might have more to say about all that later, for now I’m merely taking a trip down memory lane. In March 2003 I did not as of yet have a blog, but did post to message boards and usenet groups of one sort or another. I didn’t really go out of my way to archive much of what I might have written at the time, as it was largely in the form of off-the-cuff remarks. That said, here are a few fragments that capture where I was at in late March of that year. I’ll try to provide some context for these fragmentary comments wherever possible.

Note – In response to a conversation regarding the alleged accuracy of the so-called smart bombs to be used in the opening bombing raids:

Well, one way to interpret the “shock and awe” strategy is that the massive bombings will end up creating massive collateral damage. The “smart bombs” aren’t that smart.

Note – I expected that the Iraq War would escalate conflict, especially in the Middle East and Central Asia:

If I were the leader of one of the so-called “axis of evil” nations, I’d be pushing to get armed to the teeth with whatever weaponry possible, including biological, chemical, and even nuclear weapons, if for no other reason than because of the realization that the U.S. won’t stop with Iraq & that if one’s country is on the list of nations to be invaded, at least those invasions would be more costly to the U.S.

Note – Regarding a conversation on the continuing world-wide protests as the war started:

Many of us did not ask for this waste of a war. We have a voice too. Bring on the noise. Word.

Note – The last part of the following sentence captures my thoughts about the actual motivation for the US invasion and subsequent occupation of Iraq:

Makes me wonder if Bush et al ever bothered to listen to Iraqi citizens, or if (as I suspect is way more likely) they simply made the decision to impose their vision of manifest destiny in which Iraqis are viewed strictly as sharecroppers on those Oil plantations.

Note – A bit of sarcasm aimed at some of the happy talk that permeated the opening days of the war:

The U$ has made the world safe for SUV owners everywhere. The companies will be pleased.

Note – In response to the well-worn canard that the US was “fighting terrorists in Iraq to make Americans safer at home” I wanted to point out our own home-grown right-wing Christian fundamentalist terrorists:

I’d be willing to wager all 5 cents of my life savings that the vast majority of the people being “shocked and awed” are underpaid working stiffs like me, who simply could not afford to leave.

Sometimes I find it a good idea to look close to home. How many terrorists are our major cities harboring? (i.e., people who bomb family planning clinics & target staff of these clinics for assassination; people who burn crosses in front of the homes of African-Americans, who set fire to mosques & churches, and so forth).

Note – Another response illustrating my skepticism about the US government’s motives for embarking on the war:

I suppose the best way to put this is that I don’t buy the premise that the war has anything to do with the human rights situation in Iraq. The Reagan/Bush crowd in the 1980s didn’t give a damn back then, and the current Bush crowd doesn’t give a damn now. If it suited the purposes of our government, they’d gladly place another brutal dictator in power there and politely ignore the plight of Iraqi civilians (provided of course that the dictator in question cooperates with our government).

I thought that the war was an awful idea from the get-go, having at various points prior expressed skepticism about the initial rationale for the war (i.e., the alleged WMDs that turned out to be non-existent) as well as all the bullshit about democratizing Iraq, ad nauseum. I was convinced that the people who would be hurt the most were going to be low-income Iraqi civilian families, and that 21st century equivalents of Guernica and Dresden were likely to transpire before all was said and done. Indeed, if anything, the events that have transpired in the intervening years since the war started have been in a number of respects worse than I could have imagined. I remember at the start of this decade the  Iraqi civilian death toll was estimated at around one million, which only captures part of the story. There’s also the distress caused to the friends and relatives of those murdered by the “Coalition” (don’t forget the mercenaries while we’re at it) the massive number of injured, human displacement, disease, torture, and social death experienced by those who had the misfortune of merely being in the way of the US war machine to be considered. We’ll still need to come to terms with the reality that Iraq was yet another “laboratory” for predatory capitalist ventures, and that the chaos caused by the war was even desirable in the eyes of our ruling class as long as the profits rolled in.

There is no comfort to be found in being correct; only a really bad feeling at the pit of one’s stomach that the various efforts to raise awareness of the lies leading up to the war as well as the likely consequences of going to war simply failed to prevent the massive loss of lives since it all began on March 19, 2003 (or March 20, 2003, depending on what portion of our aching planet one happened to be occupying when the bombs burst in mid-air over Baghdad and elsewhere in Iraq). That day will indeed live in infamy.

As one might gather from the fragments, I might have been somewhat more optimistic back then. I certainly would have given the ruling class too much credit in even suggesting that any of them would bother to listen to Iraqis and their concerns – inside The Beltway (along with usual cronies on Wall Street), the Iraqis were never more than fauna. Turning to members of the ruling class to get it together and stop the warmongering is not where it’s at – almost without exception, they’ve been drinking that fire water for far too long. The summary of the last fifteen years can be boiled down a simple statement: over one million murdered, and nothing has been learned. As far as the US elites are concerned, there is nothing to learn – other than how to commit genocide more efficiently. If there is ever the critical mass of people who can end this madness once and for all, it is going to have to be us: just ordinary folks. We’re the ones who will have to say “enough is enough” in words and deeds. Until then, nothing will have been learned, and more blood will be spilled, more families will be displaced, and more refugees will be abused and exploited. Enough is enough.

All you need to know about both parties. Goodbye America.