Greatest event in sports to unite nations for a fortnight. The Netherlands and the United States failed in their bid to qualify. The football minded supporters in the Netherlands will find ways to join in the festival by supporting fans and teams of other nations. For Holland it will be Morocco in the metropolitan areas, in the south bordering Belgium, the support will be for the Red Devils. As usual, bordering the east it will stay quiet. Due to the German atrocities during 1939-1945 there will be no festival for the German team. Fraternizing in sports has in’t own rules and there are … borders after all!

After failing to qualify for 2018, the U.S. federation got exactly the win it needed with the United Bid winning the hosting rights for 2026. The only U.S. Soccer team competing in Russia this month won the game it had to win, a game American soccer couldn’t afford to lose. Oops, not going alone but with our NAFTA partners. Putting up walls … ehhh US delegation in Moscow? How shameful!!

The moment our united dream became a reality! 🇨🇦🇲🇽🇺🇸 pic.twitter.com/rCTiTcxGXj

At least security assured, Trump won’t be president in 2026.

The U.S. has put together a STRONG bid w/ Canada & Mexico for the 2026 World Cup. It would be a shame if countries that we always support were to lobby against the U.S. bid. Why should we be supporting these countries when they don’t support us (including at the United Nations)?

'It barely feels like Moscow right now. People are smiling' – @Andrew__Roth catches up with the #WorldCup fans https://t.co/PEco7jhCAm

Got an “alert” from Le Dauphine, France …

Victory and defeat are closely related on sports, also in politics after BIG SUCCES by Trump in Singapore and another BIG FAILURE days earlier at the G7 in Canada by PM Trudeau.

United States gathered another BIG DEFEAT at the U.N. General Assembly vote on crimes against the Palestinian people

With a huge majority, the United Nations General Assembly passed a resolution condemning Israel for using “excessive, disproportionate and indiscriminate” force during the recent clashes at the Gaza border and calling for an “international protection mechanism” for Palestinian civilians.

The dramatic, down to the wire session saw the United States attempt to add a paragraph condemning Hamas, which was ultimately rejected on procedural grounds though most member states supported it. The resolution, proposed by Algeria and Turkey, then passed with 120 “yes” votes, 8 “no” votes and 45 abstentions.

The eight countries that voted against the resolution were the U.S., Israel, Australia, Marshall Islands, Micronesia, Nauru, Togo and the Solomon Islands.

Most times when there are a disproportionate number of abstentions, one can concluded the effort through threats and bullying by the world’s only super power was successful. This can most often be seen in crucial UN Security Council votes.

As I have written before, Israel’s PM Netanyahu has never condemned Russia and president Putin on the provocative action by NATO in Ukraine.

Beware the Do Something Caucus

Libya: I Told You So

and the visitors will find out how welcoming Russia is.

Can Russia Stop Its Far-Right Hooligans From Ruining The World Cup?

From t.A.T.u. to Trump, do Western portrayals of `gay’ Russia miss the point? Russia became public enemy number #1 amongst the liberal gay community, bringing out a generalised Russophobic sentiment that played on Cold War era tropes in much the same way as has been in evidence since the 2016 US election. We have always been trendsetters. Arch-liberal gay writer Dan Savage called for the boycott of Soviet-developed Stolichnaya vodka, despite the fact the brand is based in Luxembourg, and is a vocal supporter of LGBT rights organisations in the US, Europe and Russia. No matter, said Savage, “Stoli is… Read more »

Deputy Minister Marcin Warchoł sharply about the SN. “Promotes a totalitarian system” [Google translation] The Supreme Court dismissed the cassation of Prosecutor General Zbigniew Ziobro regarding the printer from Łódź. The case was referred to by the deputy minister of justice. According to him, the decision of the Supreme Court is “rape on conscience” Recall: on Thursday the Supreme Court, after hearing the cassation brought by the prosecutor general in favor of Adam J, dismissed her. He decided that the man could not refuse to do the roll-up for the LGBT foundation. – The Supreme Court ruled against freedom –… Read more »

Poland could be referred to ECJ over controversial judicial reforms The sweeping legislation, which is due to come into force on 3 July, would lead to the enforced retirement of judges over 65, and allow the ruling Law and Justice Party (PiS) to enact a series of reshuffles within the country’s highest courts, allegedly to strengthen its grip on power. Critics say that the reforms are merely an attempt by PiS to cement its grip on power in the country. Judicial reform in Poland was debated in plenary with European Commission First Vice-President Frans Timmermans this week. MEPs have joined… Read more »

Iran in U-turn on women in stadiums as World Cup fever takes hold  « click for more info Many Iranian clerics oppose women attending football matches, saying they must be protected from the masculine atmosphere. (Photo: AFP/Jonathan Nackstrand) Tehran’s largest football stadium is to admit thousands of women together with men for the first time since the Islamic revolution of 1979 as World Cup fever grips Iran for its Wednesday evening (Jun 20) group game against Spain. The decision to throw open the gates of the capital’s 100,000 capacity Azadi Stadium for the landmark 10.30pm (1800 GMT) live screening comes… Read more »

Before match, England fans and diplomats honour Battle of Stalingrad dead VOLGOGRAD: England soccer fans and a top British diplomat paid tribute to those who died in the Battle of Stalingrad during World War II on Monday in a moving ceremony ahead of England’s match against Tunisia, a gesture London hopes may help salve battered ties. Monday’s game, England’s first of the World Cup, is being held in Volgograd, which until 1961 was called Stalingrad and was the location of the bloodiest battle of World War II when the Soviet Red Army, at a cost of over 1 million casualties,… Read more »

Swedish fans in ecstatic mood in the Sochi stadium …

Dr Felix Brych has indicated to FIFA officials he was observing the holding in the box involving Fabian Scar, Stephen Lichsteiner & Aleksander Mitrovic. The reason he turned down an OFR is because he spotted a flailing left elbow by Mitrovic & followed principal six  #SRBSUI pic.twitter.com/6ahGMWc77I

That’s so lovely about the sport of Football, the game never ends because the discussion is endless. The pubs have a great season!

How Sweet Revanche – Germany Eliminated This is only the second time that Germany have been eliminated from the first round at the World Cup having last done so in 1938 – however, this is the first time it has happened when the first round has been in a group stage format. Germany crashed out of the World Cup group stages and finished bottom of Group F | The Guardian | I maintain that the quality of football has left something to be desired at times, but this World Cup is providing us with far too many astonishing storylines. Remember… Read more »

Meaning of the “knockout” stage …

Both Ronaldo and Messi go home. Both remain without a goal in the knockout stages of any World Cup. Remarkable for 2 of the games all time greats.

Pelé in 1958 – scored as a youngster 2 goals in a match. A new young star is noticed in a swinging Russia during this World Cup.

‘Spain got what they deserved’

Spain have been so successful with that style of possession football but there comes a time when you have to get the ball into the strikers.

You have to change it up a bit. Spain got what they deserved. 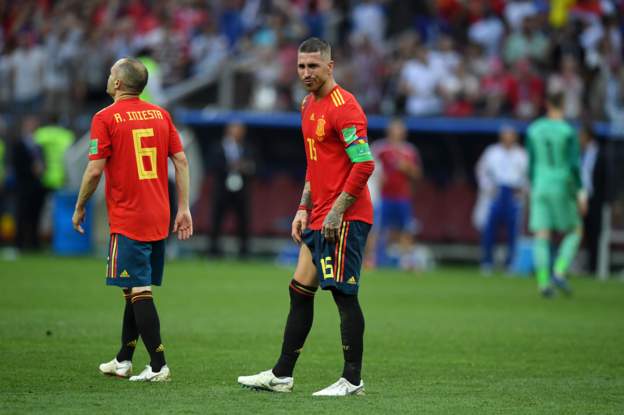 Russia reaching the quarter final of the World Cup is massive news for them, especially with all the importance president Putin has given. Will help the popularity of the game grow furthermore in a country of around 145 millions. #Russia2018

From Crown prince Salman to Spain’s King Felipe VI sitting next to PM Medvedev today … did the Russian president foresee a defeat??

Dr Felix Brych has indicated to FIFA officials he was observing the holding in the box involving Fabian Scar, Stephen Lichsteiner & Aleksander Mitrovic. The reason he turned down an OFR is because he spotted a flailing left elbow by Mitrovic & followed principal six  #SRBSUI pic.twitter.com/6ahGMWc77I

That’s so lovely about the sport of Football, the game never ends because the discussion is endless. The pubs have a great season!

Last German In Moscow Send Packing World Cup over for German referee Felix Brych | DW | Following Germany’s shock World Cup exit, the country’s referee Felix Brych is also heading home early. The 42-year-old was criticized by Serbia over his performance in their defeat to Switzerland. ○ World Cup 2018: Serbia file official complaint against referee after Switzerland penalty controversy Felix Brych has been told by FIFA that he will not be used again at this World Cup after having made just one appearance at the tournament, the Group E match between Serbia and Switzerland. Serbia lodged a complaint… Read more »