The bomb dropped on a school bus in Yemen by a Saudi-led coalition warplane was sold to Riyadh by the US, according to reports based on analysis of the debris.

The 9 August attack killed 40 boys aged from six to 11 who were being taken on a school trip. Eleven adults also died and local authorities said 79 people were wounded, 56 of them children. CNN reported that the weapon used was a 227kg laser-guided bomb made by Lockheed Martin, one of many thousands sold to Saudi Arabia as part of billions of dollars of weapons exports. 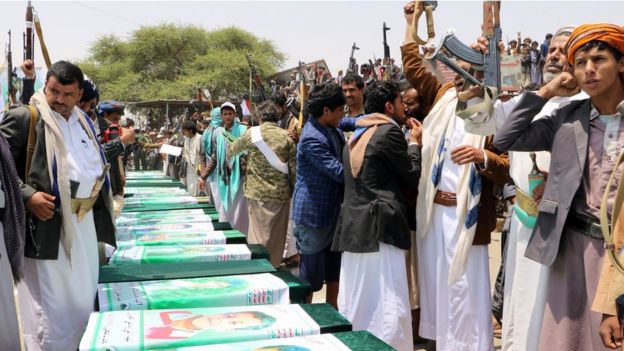 Yemeni children vent anger against Riyadh and Washington as they take part in a mass funeral for the 40 children killed in an air strike by the Saudi-led coalition last week. (Photo: AFP/Getti Images)

The Gulf monarchy is the biggest single customer for both the US and UK arms industries. The US also supports the coalition with refueling and intelligence.

The investigative journalism site Bellingcat identified bomb fragments, on photographs and videos taken soon after the bombing, as coming from a laser-guided version of a Mk-82 bomb called a GBU-12 Paveway II. Based on marking on a fin segment of the bomb, Bellingcat traced the bomb to a shipment of a thousand of such bombs to Saudi Arabia, approved by the state department in 2015, during the Obama administration.

A spokesperson for Lockheed Martin referred questions about the bombing to the Pentagon. The defense department has said it does not make tactical targeting decision for the Saudi-led coalition but does provide support to improve targeting.

…
The Obama administration offered Saudi Arabia more than $115bn in weapons in the course of its two four-year terms, more than any previous US administration, according to a report in 2016.

After the bombing of a funeral hall in October 2016, which killed 155 people, Obama halted the sale of guided munition technology to Saudi Arabia, on the grounds that improved precision would not save civilian lives if the Saudi-led coalition were not taking care to avoid hitting non-military targets. The sales were reinstated by the Trump administration’s first secretary of state, Rex Tillerson, in March 2017.

Astonishing graphic from @CNN, identifying civilian massacres in Yemen with the bomb makers – Raytheon, Lockheed Martin and General Dynamics. This should be standard in war reporting. Searing images. https://t.co/EZqkSsAri6 pic.twitter.com/NWJvPuN7ct

The Trump administration strikes back!

Why did Trump meet 1 on 1 with Putin? What might he be hiding from Bolton, Pompeo, Kelly, & the American public? How will Putin use whatever Trump could be hiding to advantage Russia & hurt America? Trump’s total lack of credibility renders spurious whatever explanation he gives.

Donald Trump’s press conference performance in Helsinki rises to & exceeds the threshold of “high crimes & misdemeanors.” It was nothing short of treasonous. Not only were Trump’s comments imbecilic, he is wholly in the pocket of Putin. Republican Patriots: Where are you???

Well, John Brendan has got many CIA goons on his side …

Former CIA boss John Brennan Interview: ‘I recognize I have a bullseye on my chest’ | Meet The Press –  NBC News |

Brennan: “I admire Gina Haspel and I want her to stay as head of the CIA …”

To ensure a more comprehensive accounting of terrorist incidents, we in the NCTC significantly increased the level of effort from three part-time individuals to 10 full-time analysts, and we took a number of other steps to improve quality control and database management. This increased level of effort allowed a much deeper review of far more information and, along with Iraq, are the primary reasons for the significant growth in a number of terrorist incidents being reported.

Now, this increase in the number of incidents being reported today does not necessarily mean that there has been a growth in actual terrorist incidents. In other words, the data you will see today represent a break from previous years, and the numbers can’t be compared to previous years in any meaningful way. This point was made to congressional staffers earlier this week, but has not been accurately captured in the various press articles over the past couple of days.

Now, second. In our scrub of last year’s data, it became increasingly clear that there were methodological problems associated with statutory language and counting rules. These criteria dated to a period of focus on state-sponsored terrorism in the early 1980s and not the transnational phenomena we confront now. I will discuss some of these methodological problems and what we’re doing to improve the process of accounting for global terrorist incidents. I would like to first turn to our charts. Using the statutory criteria found in Title 22, Section 2656-F of the U.S. Code, along with counting rules that were provided to the National Counterterrorism Center, we compiled data on 651 attacks that met the criteria for significant international terrorist incidents. Now, there are several points of note. As you can see on the left-hand side, there were over 9,000 victims of significant international terrorism last year, of which 1,907 were killed. On the right-hand side, you can see the regional breakdown of total attacks and the relative share of the 1,907 individuals killed.

Now, a couple of points of note. Much has been made in the press about Kashmir and clearly there was, on average, an attack nearly every day in Kashmir. In fact, there were a total of 284 attacks in Kashmir that met the statutory criteria for significant terrorist incidents. Now, the total number of people killed in South Asia was about 500. In other words, the attacks were often conducted against one or two people. By contrast, there were very few attacks in Europe – it’s represented here on the blue bar, in Europe — but there was a very high death toll. This reflects the very deadly attacks in places like Madrid and Beslan, Russia, where many hundreds of people were killed in single incidents.

As you can see in the lower left-hand corner, the methodology, chronology, and selected statistical charts are being posted and are already posted on www.tkb.org. This is the website for the Memorial Institute for the Prevention of Terrorism in Oklahoma City, and we are most appreciative of the institute for partnering with us to make the data available to the American public.

Now, the next chart. This second chart reflects the subset of significant international attacks conducted against U.S. interests. As you can see on the left, 64 attacks, approximately 10 percent of the total number of attacks worldwide, were conducted against U.S. interests. The vast majority of these anti-U.S. attacks took place in the Middle East, where 83 percent of those attacks occurred. As you can see on the pie charts on the right-hand side of the briefing board, a far lower percentage of U.S. citizens were actually wounded or killed. Of the roughly 9,300 individuals wounded in significant international terrorist incidents, 103 were Americans. Total U.S. victims: 103. And of the more than 1,800 people killed last year in significant international terrorist incidents, 68 were Americans.

○ Not a Fan of These Picks

In any case, I dislike the nomination of Chuck Hagel and I don’t give a damn whether he is confirmed or not. I don’t oppose him; I just don’t like the pick. John Brennan for CIA, I oppose. I don’t think he has been held accountable for his actions during the Bush administration and I do not think the Democrats should confirm him unless and until his record gets a full vetting.

The enemy of my enemy …

In today’s world there is far more terrorism and the War on Terror is causing deaths and suffering across vast swats of land from Africa through the Middle East into the AfPak region.

○ Terrorist Attacks and Deaths in 2017

In 2017, there were 10,900 terrorist attacks around the world, which killed more than 26,400 people, including 8,075 perpetrators and 18,488 victims. The patterns described here provide a very general overview. We encourage readers to explore the Global Terrorism Database and consider contextual information for a comprehensive assessment. The year 2017 marks the third consecutive year of declining numbers of terrorist attacks and deaths worldwide, since terrorist violence peaked in 2014 at nearly 17,000 attacks and more than 45,000 total deaths.

I Tried to Talk Us Out of Libya

Posted as a reply to Zwackus today … “I am kind of curious why I’ve been seeing this particular narrative pop up here and there … .. I am a lazy pseudo-intellectual poser, but curious nonetheless.” Curiosity or lack of curiosity? Knowledge, intelligence and understanding is fed by curiosity. The leading nation of the past half century has managed to become a pariah state due to lack of anyone or institution to hold the USA accountable. It’s not just the delivery of munitions and fighter planes, most of the time the US themselves were perpetrators of war crimes as we… Read more »

Posted earlier on June 5th … The Yemenis are unkown to the Western world and the media has no interest whatsoever. Needless to say, the British are fully aware … ○ BAE refuses to confirm workers loading bombs on Saudi piloted jets – Made in UK Martin Niemöller – Lutheran pastor and social activist The origins of this poem first have been traced to a speech given by Niemöller on January 6, 1946, to the representatives of the Confessing Church in Frankfurt. According to research by Harold Marcuse, the original groups mentioned in the speech were Communists, the incurably sick,… Read more »