The White House Undermines Our Elections

Despite the fact that our country is clearly on the fritz and in need of a hard reboot, people are basically holding it together. In the coming weeks, soccer matches will start up again and we’ll head to Back to School Night to meet our children’s teachers. Routine trips to the grocery or hardware stores come off just as they always have. For the most part, our interactions with our neighbors are normal.  We still spend our leisure time in the same ways and visit the same places for relaxation.  The economy is humming along well enough and no one is experiencing mass layoffs or huge losses in their retirement portfolios.  For those who are truly dissatisfied, the knowledge that elections are approaching is a solace and focal point for organization and resistance.  Maybe there’s nothing wrong with America that cannot be solved in the traditional and legal ways we’ve addressed the need for change in the past.

But what if the elections don’t bring change? What if we lose confidence that the elections were fairly and honestly conducted? In that case, how likely is it that things will continue on in a largely normal fashion?

The DNC called the FBI on Tuesday because they had been alerted to an attempt to breach their voter database. That sounds all too familiar. And it’s just one indication from yesterday that malevolent actors are still seeking to mess with our elections and influence our policies in underhanded ways.

Early Tuesday morning, Microsoft announced that parts of an operation linked to Russian military intelligence targeting the US Senate and conservative think tanks that advocated for tougher policies against Russia were thwarted last week.

It appears that the Russians are targeting Democratic candidates for office like Sen. Claire McCaskill of Missouri and Dr. Hans Keirstead who narrowly lost his primary bid to take on the Kremlin’s favorite congressman, Dana Rohrabacher of California. In Florida, there’s a raging dispute over whether Sen. Bill Nelson was correct or perhaps disclosed classified information when he alleged that the Russians had penetrated county election boards and “are in your records and all they have to do, if those election records are not protected, is to go in and start eliminating registered voters.” The FBI and DHS have reassured county election officers that they have no evidence that this is the case, but some anonymous intelligence sources have backed Nelson’s claims.

Whether these actions lead to concrete meddling, like deleting people from voter rolls or changing vote tallies, the mere fact that we’re talking about them serves to create doubt about the integrity of our elections. And that suits our enemies just fine.  Do you remember the final message Julian Assange sent to the Trump campaign on Election Day?

WikiLeaks didn’t write [Donald Trump Jr.] again until Election Day, November 8, 2016. “Hi Don if your father ‘loses’ we think it is much more interesting if he DOES NOT conceed [sic] and spends time CHALLENGING the media and other types of rigging that occurred—as he has implied that he might do,” WikiLeaks wrote at 6:35pm, when the idea that Clinton would win was still the prevailing conventional wisdom. (As late as 7:00pm that night, FiveThirtyEight, a trusted prognosticator of the election, gave Clinton a 71 percent chance of winning the presidency.) WikiLeaks insisted that contesting the election results would be good for Trump’s rumored plans to start a media network should he lose the presidency. “The discussion can be transformative as it exposes media corruption, primary corruption, PAC corruption, etc.,” WikiLeaks wrote.

Shortly after midnight that day, when it was clear that Trump had beaten all expectations and won the presidency, WikiLeaks sent him a simple message: “Wow.”

I’m fairly certain that Trump, who hadn’t even bothered to write a victory speech, was well prepared to follow the plan Assange had suggested. He had signaled that intention repeatedly throughout the late stages of the campaign.

Donald Trump said Thursday he will accept the results of next month’s election if he wins, a caveat that threatens to cast unprecedented doubt on the legitimacy of the electoral process.

Trump offered a stunning declaration during the final presidential debate that he might not accept the results of next month’s election. In his first speech since the debate, Trump seemed to simultaneously double down on the stance he articulated Wednesday night while also trying to clean it up.

Trump argued forcefully during a rally here that he was being asked to “waive” his right to contest the election after critics slammed him for refusing to pledge to accept the results of the election the previous night during the final presidential debate.

“I would like to promise and pledge to all of my voters and supporters and to all of the people of the United States that I will totally accept the results of this great and historic presidential election, if I win,” Trump told supporters here in his first comments since the final debate.

We never got to find out what he would do if he didn’t win, but a good indication is that he set up a ridiculous commission to investigate voter fraud despite the fact that he won. The chances that he would have gracefully accepted the legitimacy of a loss are zero.

Any government that rules in principle by the consent of the governed must assure that people will accept the legitimacy of its elections, but Trump has moved to undermine confidence in our elections. This is consistent with his efforts to undermine faith in federal law enforcement and our intelligence services. His refusal to acknowledge Russian meddling doesn’t mean that his other actions have bolstered confidence. The fact that he simply won’t act to protect our elections now serves the same purpose.

I don’t know why he is bent on following a strategy outlined by WikiLeaks and Russian intelligence but the result is disintegration. And unlike termite damage, this kind of rot is easily visible. There’s a limit beyond which things will not remain calm and orderly. We will not have the same neighborly relations and our routines will be disrupted. Respect for the law will vanish and belief in peaceful and legal change will disappear. Demonstrations will turn violent and domestic terrorism from all sides may emerge.

For outside actors, perhaps this is what they want for America, but I don’t get why our president wants this. I don’t understand why everything he does seems to serve Putin’s purpose.

What I do know is that a lot of people are not going to accept the midterm election results and the president is working to make sure that this is so.

An Unhappy Valentine’s Day in the White House 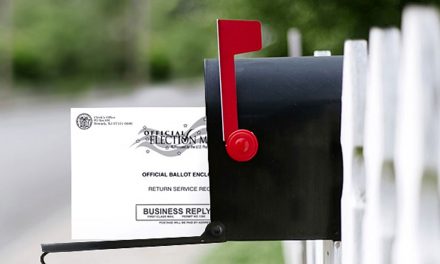 Trump is an Idiot to Oppose Vote-By-Mail

“For outside actors, perhaps this is what they want for America, but I don’t get why our president wants this. I don’t understand why everything he does seems to serve Putin’s purpose.”

Yes you do. Trump’s malfeasance is one of your main beats.  “Everything he does seems to serve Putin’s purpose” because Putin has something on him. You may not know exactly what it is, but you understand perfectly. He’s a stooge, an asset, or compromised.

. . . to the front of the pack as the Ockham-endorsed hypothesis.

I don’t think electoral legitimacy issues are being equally experienced across our political spectrum. We need to be honest about where the actual threat of the delegitimization of our voting system will come from. The majority of the Left has legitimate grievances about our electoral process since….well…sometime after 1790. The supreme court picking their drinking buddy’s son in 2000 and then shredding the Voting Rights act are just two recent examples. Yet “domestic terrorism” hasn’t be the Left’s response by and large even when the electoral outcomes have been devastating to their communities. The Right has been a direct beneficiary… Read more »

Banana Republicans’ actual agenda (even after great efforts to hide/disguise much of it) consigns them to permanent minority status under free and fair elections.

Indeed this undermines elections and democracy. That’s feature, not bug.

I don’t know why he is bent on following a strategy outlined by WikiLeaks and Russian intelligence but the result is disintegration. And unlike termite damage, this kind of rot is easily visible. There’s a limit beyond which things will not remain calm and orderly. We will not have the same neighborly relations and our routines will be disrupted. Respect for the law will vanish and belief in peaceful and legal change will disappear. Demonstrations will turn violent and domestic terrorism from all sides may emerge. The only real question, I think, is whether or not all of this is… Read more »

The problem is what if the results actually are illegitimate? What if the hackers succeed in changing some votes or voter rolls?  And what if this results in Republicans keeping the House? At this point, it is vital that people not accept the results of the election, at least if the suspicion of fraud is demonstrably well-founded. The liberals are so invested in protecting the legitimacy of our institutions that they have no recourse when that legitimacy is, in fact, lost.

The key point is that electoral legitimacy depends upon the consent of the governed and if the American Republic was based on the principle of government for the people and by the people, efffecttively excluding a large share of voters from any effective say in government through widespread gerrymandering, voter suppression and outright vote hacking will result in widespread civil disobedience and a refusal to follow Republican policies and laws. And then the rightwing oligarchy will be in the awkward situation of having to use force to compel basic compliance with their laws and policies. That’s when the societal consensus… Read more »

You should read Habermas’ Legitimation Crisis, if you haven’t. I think you would find it illuminating. In part because it leads to the conclusion, I think, that the breakdown in political legitimacy that we are currently witnessing is really just one part of a much bigger process. Violence is one possible result, as you argue, but also possible is what Habermas calls a “motivation crisis” – a generalized condition of profound apathy and general not-giving-a-shit. That seems more likely to me than political violence, to be honest, except perhaps for small pockets on the far ends of the political spectrum.

“… a ‘motivation crisis’ – a generalized condition of profound apathy and general not-giving-a-shit.”

That is precisely what I have been seeing in my recent TrumpLand travels (Covered here in four “Go West Young Man” posts.) and elsewhere…also among the more intelligent college and grad school people, and in other segments of society that would be expected to be more “liberal.” (Whatever that word means now that the neolibs turned out to be closet neocentrists.)

Got other, more important things to do than try to figure out which line of bullshit should be supported.