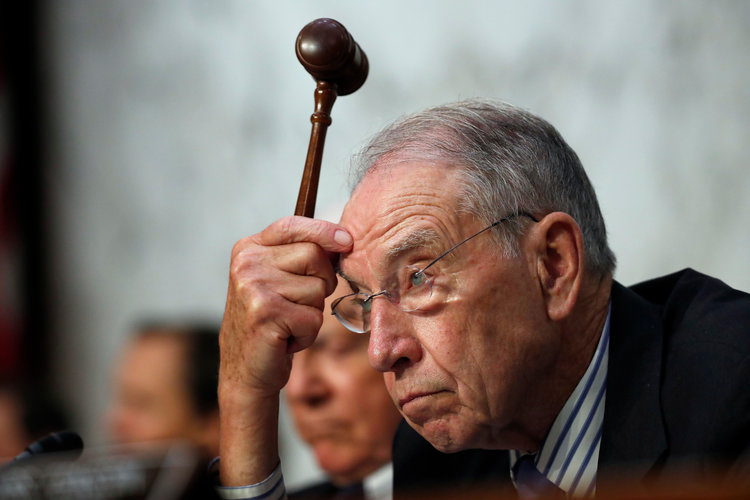 When I saw that the president of the United States said in a speech that the noise from wind turbines causes cancer, my first thought was that 2018 U.S. Wind Champion Award winner Chuck Grassley of Iowa was going to be perturbed. Not only is Iowa one of the national leaders in the production of wind energy, but Senator Grassley is largely responsible for creating the wind energy tax credit. When the senator’s response came, it did not surprise or disappoint:

“I’m told that the White House respects my views on a lot of issues,” Grassley said. “(Trump’s) comments on wind energy — not only as a president but when he was a candidate — were, first of all, idiotic, and it didn’t show much respect for Chuck Grassley as the grandfather of the wind energy tax credit.”

Grassley wasn’t done, either, because he followed up his “idiotic” quote by issuing a press release “co-signed by Oregon Democratic Sen. Jeff Merkley along with several senators running for president as Democrats, including Sens. Kamala Harris of California, Kirsten Gillibrand of New York, Amy Klobuchar of Minnesota, Elizabeth Warren of Massachusetts, and Bernie Sanders of Vermont.” The press release called for more federal funding for wind energy.

Trump once said “wind farms are a disaster for Scotland, like Pan Am 103,” a reference to the Lockerbie bombing he made while opposing an offshore wind farm project near his golf course.  For some reason, wind and death are connected in his mind, perhaps due to what the wind does to his hair.

For whatever reason, he’s been thinking a lot about wind power lately. At a recent rally in Michigan he told his MAGA supporters “If Hillary got in. . . you’d be doing wind. Windmills. Weee…”If it doesn’t blow, you can forget about television for that night. ‘Darling, I want to watch television.’ ‘I’m sorry! The wind isn’t blowing.’ I know a lot about wind.”

Senator Grassley has been grumbling about Trump’s aversion to wind since August 2016, telling reporters then that candidate Trump would keep his anti-wind promises “over my dead body.” In 2017, Grassley went after Rick Perry when the Energy Secretary released a report claiming that the unreliability of wind power created a security threat to the energy grid.  He’s clearly not happy that the leader of his party continues to spread idiotic disinformation about wind power.

As for cancer, that’s something you can get from breathing in burnt coal particulates. So, Trump’s preference for coal over wind isn’t just stupid. It’s deadly.

“Stupid but deadly” is my new favorite Trump campaign slogan.

“If it doesn’t blow, you can forget about television for that night. …

Exactly.  How would he get his latest directives from Sean Hannity?

Even if Grassley does care enough about the issue to stand up to Trump, he will be the only Republican Senator doing it if Trump decides to try and find a way to eviscerate funding for wind power. Apparently the Governor of Iowa possesses enough stupidity to make up for anyone like Grassley. Asked about Trump’s claim, Republican Gov. Kim Reynolds refused to say the president was wrong, saying it was not her place to do so. “You know how those things change. One year coffee is good for you and the next year coffee causes cancer,” she said. “That’s… Read more »

She has no corner on the market in Iowa stupidity.  You know Devin’s family farm, in King’s district, Iowa 4?  There’s a bunch of dairy farmers in the district.  Nearly all of their workers are undocumented Mexicans/Guatemalans.  The farmers live in terror of an ICE raid and the ensuing penalties, which would destroy them, and they still all vote Republiclown.

Don’t see how they could legally vote if they are undocumented immigrant workers. They’re employers could but they’re not going to be deported, obviously.

In the face of National Trumpalism, an enabler like Guv. Reynolds is required either to be extremely stupid, or profess extreme stupidity. Grassley can get away with his little verbal spitball because he has cast so many actual votes supporting National Trumpalism. But to hold office in a Trump state a Repub generally must be able to simulate mental defectiveness at a level similar to Der Trumper.

Even greater displays of willful ignorance and woeful stupidity are technically preferred, of course, such as “conservative” darling Bevins in McConnellstan.

The state with the most wind power in the nation is apparently Texas but the state that generates the most windpower as a % of its own electricity is Iowa, then the two Dakotas and KS. All strong GOP states. Only CA is a wind power stronghold that is mainly Democratic. This, of course, is unsurprising since most GOP states are largely empty and, in the Midwest, windy.

Trump on “wind’ is but another collection of stupid comments from a deeply stupid man, not to mention a fool who claims to know everything about yet another subject he knows absolutely nothing.  Which today makes him the quintessential republican.

Grassley is right to be perturbed to say the least, but has himself benefited from other forms of GOP strategic stupidity, as they all have.  However, as Grassley is learning, stupid eventually comes back to bite.

Unfortunately Repub death by stupidity is taking a long time to transpire.

Stupidity reigns supreme across every state of the old Confederacy, plus the border states of KY, MO, WVa and Bloody Kansas, with only VA in defection. Add in lost causes in the old Union like OH, IN and perhaps IA, and we may all be dead before the Repub party dies by stupidity. Hell, these denizens of the New Confederacy think their Trumper is highly intelligent! As always, the supreme problem of democracy is loss of connection to objective information.

We are shackled to a corpse.

Honest, intelligent people can debate the pros and cons of wind power.  Of course, this leaves out Trump on both counts, and Grassley on at least one (take your pick). Grassley’s objections to Trumps idiocy here are mainly about his ego, not the merits:  ” it didn’t show much respect for Chuck Grassley “, he says. Jesus,  people who talk about themselves in the third person should not be allowed to run for public office.

Good of Grassley to come out swinging, but why is it that some people refer to themselves by name in some kind of bastardization of the 3rd person singular? ..”and didn’t show much respect for Chuck Grassley as the grandfather of the wind energy tax credit.” He’s referring to himself. This reminds me of the Seinfeld episode, “The Jimmy.”  “The Jimmy doesn’t want to go the health club today ” (referring to himself.) Surely, the Larry David/Jerry Seinfeld writing team must have encountered this weirdness more than a few times to satirize it.

It’s a common phenomenon among egotists. Trump occasionally does it but it’s not hiss real narcisistic metier.

First, these aren’t windmills, which largely disappered about 150 years ago (used to grind grain or to turn a lathe, etc.); they’re wind turbines, they generate electricity. Second, the noise they make is apparently 30 decibels, which is quite low and at a frequency that human ears have difficulty detecting. Third, they kill a far lower number of birds than cats or birds flying into glass-lined buildings like Trump Tower. The reason Trump hates windpower is that the Scottish government gave a permit for an offshore wind farm that could be seen from his golf course in Aberdeenshire. That offended… Read more »