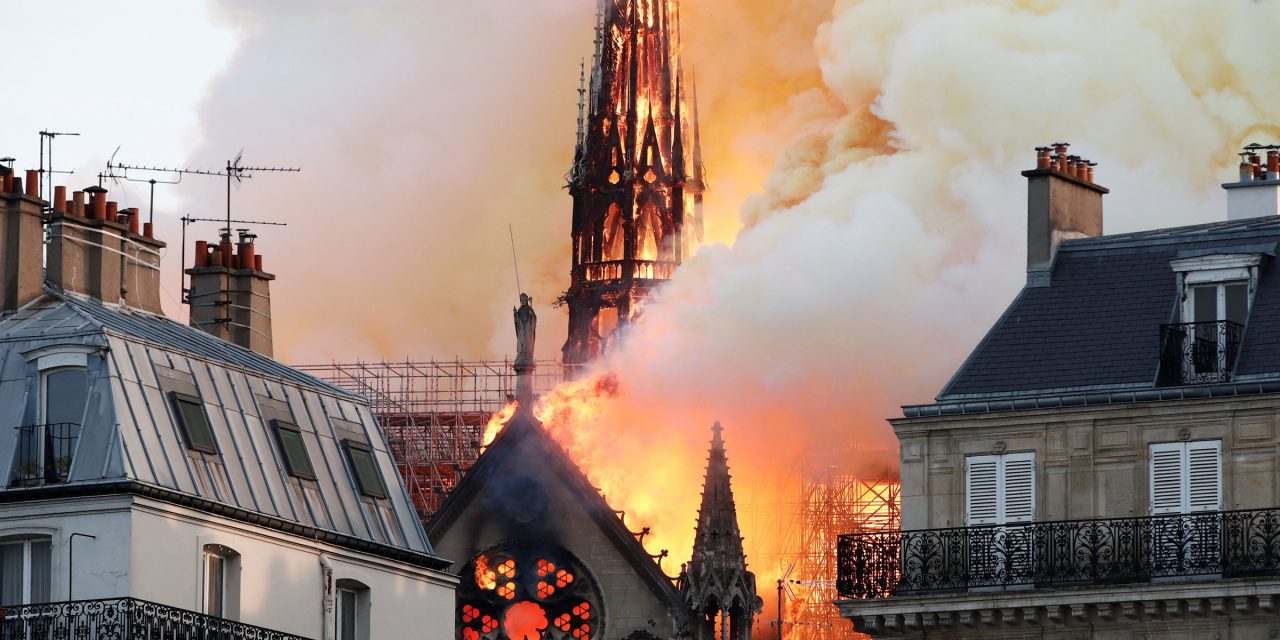 It’s tragic that a fire has ravaged the Notre-Dame Cathedral in Paris, burning through it’s roof and collapsing its spire. The cause is as yet unknown, and it will be a while before we get a full damage assessment. The structure contains countless treasures in addition to being an architectural and aesthetic marvel in its own right.

The cornerstone of the building was laid in 1163, more than 850 years ago, Construction required more than two centuries and multiple architects to complete. The pace of technical change back then was obviously much slower than we’re accustomed to today, but it was substantial enough for there to be notable innovations along the way, (like flying buttresses) that could have never been envisioned when the original blueprints were drawn up.

I think this is moment to consider the dedication and persistence that were required to carry out a major urban project across the administration of four kings, two of whom reined for over forty years. Our longest serving leader, Franklin Delano Roosevelt, served for twelve years. Try to imagine us celebrating the completion of a building that had been started in 1800 and you’ll begin to get an idea of the scope of the thing.

It takes a sustained period of relative cultural and society stability and security to achieve something like that, and then there is the additional six hundred years after completion that the French have managed to sustain and periodically update the structure. In the 16th Century, it was attacked by rioting Huguenots. Despite vandalism and repurposing for the Cult of Reason, the cathedral survived the French Revolution. It made it through two world wars.

Napoleon Bonaparte was both married and coronated there, and the place is rich with history. Reportedly, over 13 million people visit each year, and they carry those memories with them.

The cathedral will be repaired and rebuilt, and hopefully the damage to irreplaceable works of art will be limited, but this has already been a giant tragedy for all of humankind.  It’s not only a monument to God, but a testimony to what people are capable of accomplishing if they put their minds to it. Maybe the one redeeming aspect of this fire can be that it reminds us all of that.

They’re Coming After Your Organic Foods

According to the Guardian live feed,  it’s
spread to one of the two towers, and the entire roof has collapsed.

Watching that spire collapse was heart breaking. But it’s a roof collapse that kills a building. If the entire roof collapsed, everything inside is gone.

Update to Tuesday.  The twin bell towers were saved intact. The stone frame (and buttresses also appear to have remained more or less intact.  But the apse and transept (which give it its cross shape) were probably completely destroyed.

What happened to the stained glass windows clearly will have to be carefully assessed and, of course, everything needs to be stabilized.

I am sorry to hear this. At least one thing that you said has broader implications. Much broader. It’s not only a monument…but a testimony to what people are capable of accomplishing if they put their minds to it. Maybe the one redeeming aspect of this fire can be that it reminds us all of that. As I travel the length and breadth of this country I very frequently have exactly the same thought about the U.S. The roads, the farms, the houses, the cities, the different cultures…the people!!! James Baldwin said it best. This is now about to be… Read more »

. . . he who will not see: The Dems missed their chance 2016; then they missed their chance again by buying into that whole RussiaGate thing and are now apparently headed for a third strike in 2020. One can only shake one’s head at the ludicrousness of the silly conspiracy theories you routinely buy into (9/11 inside job!!!) — while simultaneously treating facts established easily to a preponderance-of-the-evidence standard of proof, and in many respects to the higher “beyond-a-reasonable-doubt” standard applied to criminal legal cases — as some sort of paranoid, blame-shifting conspiracy theory! It’s pretty hilarious, in a… Read more »

We fly to Paris tomorrow on a long-planned trip.  We would have seen it this Thursday.  Instead we may go to of a candlelight vigil.  The French held them in France when the World Trade Center fell.

Its going to be strange-

Don’t despair. In historical terms, these magnificent cathedrals burn down all the darn time, sometimes due to invading armies, sometimes by accident (apparently the case here). The Cathedral of Notre-Dame de Paris will be an astonishing place again someday. The Cathedral of Notre-Dame de Chartres will be an astonishing place right now, this Thursday. A half-day trip if you get an early start, the cathedral is a 10-minute walk from the Chartres train station. With recent cleaning and restoration, it is glorious. Get a guided tour if you can, Malcolm Miller is gruff and crusty and wonderful. http://www.cathedrale-chartres.org/en/guided-tours-in-english,article-1108.html Enjoy France,… Read more »

You know what? That did help my mood. It will be glorious. It’s literally still there. Thanks.

Thanks for that.  It will surely be memorable.

Obviously, I heartily second the Malcom Miller rec. And I’m also glad to hear he’s still at it!

The stained glass windows at Chartres are the most amazing I have ever seen and possibly the finest array in the world.

. . . are likewise deservedly world-renowned, and it’s only a few blocks away from Notre Dame on the Île de la Cité, surrounded by the Seine, the original site and still the heart of Paris.

Sometimes I get bummed that I missed the Tuileries Palace by ~150 years.

. . . sommes tous New-Yorkais, . . . declared Le Monde in headline and editorial in its September 12 and September 13, 2001 editions: . . . aussi sûrement que John Kennedy se déclarait, en 1962 à Berlin, Berlinois. To which our disgusting rightwingnut assholes responded with “cheese-eating surrender monkeys”, “freedom fries” and “freedom toast” when the French showed the wisdom, morality, and Reality-Based good sense to decline participation in the War Crime of Dick and George’s Excellent Adventure of invading Iraq based on a web of already exposed lies. My rage at that has mostly subsided over the… Read more »

I wonder how long it takes before the media is reporting that some political figure is blaming a Muslim immigrant, or George Soros.

[It’s an old playbook: in various European regions, during and well after the construction of Notre Dame, the practice of blaming immigrants/outsiders (typically Jews) for this or that calamity was particularly virulent during “Holy” week.  In those days it advanced the political interests of the inciters, conveniently producing massacres.]

How I hope I’m wrong.

The Breitbart comments today were filled with Muslim sabotage speculation because, of course they would be.

Well, feudal monarchy perhaps does not get the credit it deserves. It goes without saying that a project like Notre Dame would have been far beyond the political capabilities (not to say vision) of democratic materialism. A reasonable facsimile will of course be erected, but what has gone up in flame is irreplaceable, as is the symbolic connection to the Medieval carpenters who erected the wooden frame(s) and created all the elaborate interior latticework. There are no more 400 year old oaks in all of France to replace the beams engulfed by this fire, nor do we likely even have… Read more »

I saw a fascinating thread on Twitter, by someone who said he attended a emergency preparedness workshop at Versailles several years ago.  He said because they are protecting thousand-year-old buildings, they have plans for once-in-a-century events.  Here are some excerpts from it: “The fire department in Paris followed a protocol: Save the people, save the art, save the altar, save what furniture you can, then focus on the structure, in that order. They know what can be rebuilt and what can’t. “This protocol has been in place since the last time the cathedral was destroyed, sacked during the French revolution.… Read more »

. . . this morning that (unsurprisingly) the stained glass windows are gone, which struck me as the most immediately obviously irreplaceable loss. I’ve attended guided tours/lectures at Chartres Cathedral a few times led by an excellent, immensely knowledgeable English (but also natively fluent in French) guide (Malcolm Miller, iirc) who’d basically made studying that one cathedral, and vividly sharing that knowledge and appreciation with visitors, his life’s work. He did things to make it come alive like using the bodies of members of the tour group to illustrate the functions of the structural elements of gothic architecture, along with… Read more »

Thanks for your thoughts, Booan. It’s a terrible tragedy. But it will be restored.

BTW, the Cathedral of St John the Divine in New York has been under construction for the last 127 years. Still a long way to go. Liverpool Cathedral took only 74 years (1904-1978).

It appears that the stone ceiling stood up to the roof collapsing and protected the interior of the cathedral. The interior damage is far less than expected. Much that was expected to be gone is still there and minimally damaged, including the organ, the Pieta, and the rose windows. The Paris pompiers seem to have done a great job. Here’s to less bad than expected news.

Perhaps the next question after your observation is ‘do we have enough faith in our future to rebuild (climate change comes to mind)?

Macron has jumped in with a brave declaration this morning that ‘we will rebuild’ and sets a 5 year pace for that goal. Close to $600 million has already been pledged for the rebuild reflecting not just large French billionaires and corporations but thousands of individuals joining the spirit of the effort.

But it’s still something to contemplate, this question of having faith enough in our future to restore a major global representation of the struggle to reach today.

The NYT has a good photo essay of the fire’s aftermath https://www.nytimes.com/2019/04/16/world/europe/photos-of-notre-dame-fire.html

You can see from the first photo that the stained glass windows in the front of the church appear to be all intact. The question is whether the ruined windows on both sides of the long apse can be recovered and repaired. Some of them might be repairable but I’m no expert.