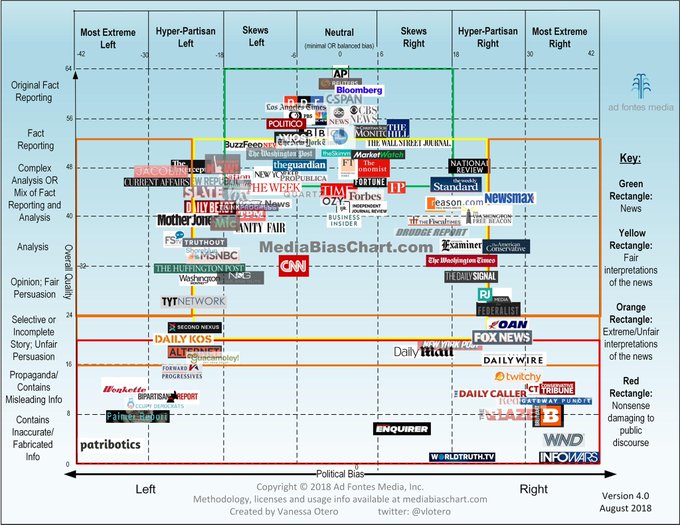 Of all the stories I could have used to follow up on this entry, which was the last one to enter the all-time top ten, the rating of Wonkette is by far the funniest.  Ad Fontes Media, which produces the Media Bias Chart, placed Wonkette on the chart in September 2018, one month after I posted the entry.  Wonkette was not pleased and had pointed things to say about its placement.

Here at Wonkette, we often make #jokes in our headlines and say things that are not literally true for humor purposes, and when we do that it’s pretty fucking spelled out, honestly. For instance, when we wrote that Pat Robertson beat up Hurricane Florence with his Bible and now Hurricane Florence is dead, we do not expect Ms. Otero to literally believe the hurricane is gone because Robertson beat it up!

Shorter Wonkette: Ad Fontes Media has no sense of humor.  I’ve seen that before.

I’m not sure how Wonkette would react to being called a bunch of evil clowns.  They would probably agree about the clown part, but maybe not the evil, although it would depend on the writer.  I’m sure some of them would take it as a badge of honor.

Wonkette is not to the left of Jacobin. In fact, Jacobin would probably tell you that their own selves, verrrrry self-righteously. We are also not to the left of The Intercept.
…
I would agree we are ‘nonsense damaging to discourse’ but we’re HYPERPARTISAN LEFT not EXTREME LEFT and we do NOT BELONG IN MISLEADING, we belong in EXTREME/UNFAIR INTERPRETATION OF THE NEWS.

In other words, “Yeah, we’re biased, but not that biased!”  According to their own view of their site, it belongs on that chart next to Daily Kos, not where it is the the left of Jacobin (I agree, that’s silly) and just above Patribotics (that’s insulting).

The main reasons for Wonkette’s low quality placement are that in our ranking methodology, highly unfair characterizations of political opponents, such as ad hominem attacks, name calling, and foul language result in low scores for quality and high scores for bias–even if it’s for humor.

I see they object to this. I am not calling them “fake news.” That term is not on the chart. Note that the category they are in for quality is “propaganda/ contains misleading info,” which is an “and/or” category. That is, the category is propaganda OR misleading. My ranking categorized them as “propaganda” because its articles get such high scores in the “unfairness instances” metric on the article grading rubric. Propaganda is defined in the Oxford English Dictionary as “information, especially of a biased or misleading nature, used to promote or publicize a particular political cause or point of view.” Many Wonkette headlines are also misleading–for example, though the headline says otherwise, the chart does not say it is “fake news,” and, it is ranked meaningfully higher than Louise Mensch’s blog, Patribotics. However, Wonkette’s articles can be categorized more often as “propaganda” than “misleading.”

That was Ad Fontes Media’s justification of its placement of Wonkette.  What about Wonkette’s defense that it’s all a joke?

This is true. Their writing is hilarious, especially as viewed through the lens of other liberal, internet savvy, politically astute readers who love a sick burn. However, things that are funny can also be unfair at the same time. So insults, ad hominem attacks, curse words, and name calling, WHILE VERY FUNNY, are still unfair means of persuasion. We categorize several rhetorical devices and statements as unfair in our rankings. A general guideline for what counts as “unfair” are 1) practices not in accordance with journalism ethics and writing style guides and 2) types of information that would not be admissible in court according to rules of evidence. I’ve written more on the “unfairness instances” metric in this previous post.

You may not be convinced that funny insults make a source low quality (just merely biased, you may concede), especially if you like and agree with them. If you like Wonkette and the names it calls Republicans and Trump, consider what you would think of the quality of a source on the right if it regularly called Hillary Clinton a bitch or a hag or worse. Also consider what moderate or slightly conservative readers would think of the quality of Wonkette’s stories in terms of how persuasive they are to them.

Ad Fontes Media then goes on from Wonkette to all kinds of political humor.

I admit it was my subjective decision to have that underlying premise, but I submit that this type of content only serves to reinforce one’s existing beliefs and alienate the other side, and is therefore, highly polarizing. There are certainly lots of sources that do this: for example, John Oliver, Bill Maher, and other evening comedy shows also use pretty cruel humor. There is an audience for it because it is cathartic. There is an important place in our discourse and democracy for humor–we need to have the freedom to be able to make fun of our leaders. But to the extent people rely on it for 1) news ( i.e., fact reporting) and 2) takes on the news (i.e., analysis/opinion), I think that kind of content  is highly polarizing, and thus, extremely damaging.

As support for the proposition that it is damaging, I point to the state of our country’s current discourse and the resulting election of our current president.

That’s a sobering thought.  It won’t stop me from using John Oliver, Stephen Colbert, Seth Meyers, Trevor Noah, or Samantha Bee to comment on the news, but I will be more cautious about doing so when I could use a more serious news source.

Why No One Criticizes Israel

Why I support Net Neutrality

Modified from Wonkette reacts to its Media Bias Chart placement, an update to ‘A comparison of two measures of media bias shows readers and viewers respond to both ideology and quality’, originally posted at Crazy Eddie’s Motie News.

That chart’s been around for a while now and while it’s sort of a useful concept in theory I’ve always thought the specific placements tended toward the ridiculous.

Wonkette’s placement being a case in point.  The system used to rate organizations could not distinguish satire from propaganda and did not care that it couldn’t.  Just the same, I generally find it useful, even if it failed in this specific instance.

Thanks for this. Interesting treatment. I don’t go to Wonkette to gain information which is meant to persuade. I go there to gather around the liberal campfire to have good, rich laughs with other liberals, and to enjoy hyperbolic humor in the middle of this Presidency which is so crazy-making. It helps me deal with the anger and disempowerment I sometimes feel. Their writers do occasionally bring me news stories I haven’t read about elsewhere. But if I were to bring those stories to people who are not solid liberals, I would point them to another treatment of the stories,… Read more »

Generally that chart is a useful heuristic. I treat it as such, and nothing more or less. Having said so, I’ll just note that Wonkette as a site has always been difficult for me to take seriously. When I do see it show up on my newsfeed, I might look if I am really in the mood for snark. If I want to send a link providing a sound treatment about an event or topic to my friends, family, or the hooligans who follow me on Twitter, then I look for a relevant article from sources I consider more reliable… Read more »

. . . rating Wonkette by standards created for purveyors of “news” (which, to my knowledge, though I’m only a very occasional reader there, they’ve made no slightest claim to be; i.e., it’s always been my understanding they were not claiming to provide “news”, but rather transparently snarky takes on the news).