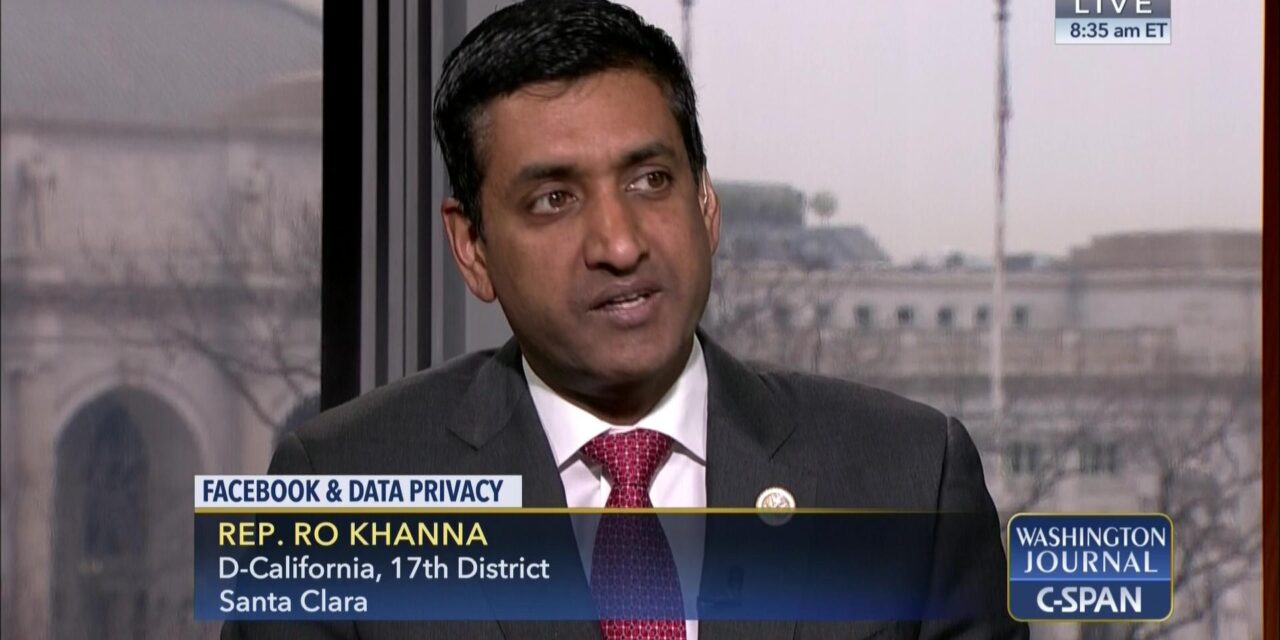 In some ways, I really like this this piece by Greg Jaffe of the Washington Post, but I also find it infuriating. On the plus side, it’s clever how Jaffe sets the scene for a discussion of the health and future of American capitalism:

PALO ALTO, Calif. — A perfect California day. The sun was shining, a gentle breeze was blowing and, at a Silicon Valley coffee shop, Rep. Ro Khanna was sitting across from one of his many billionaire constituents discussing an uncomfortable subject: the growing unpopularity of billionaires and their giant tech companies.

The main problem with the piece is that it doesn’t really frontally grapple with the problem. Yes, it’s interesting that Ro Khanna is enthusiastically supporting Bernie Sanders’s presidential campaign while representing Silicon Valley and doing constituent outreach over coffee with Chris Larsen, a man who until recently was the fifth-richest man in the world. But there isn’t anything necessarily wrong with capitalism just because the whole world has basically been gobbled up by five tech companies.  The problem is with lack of anti-monopoly and anti-trust enforcement, not with the system of capital investment.

At the Washington Monthly, we continue to hit on this theme. In the current issue we have pieces by Eric Cortellessa,  my brother Phil and Grace Gedye that all look at the problem of under-regulating Big Tech. The candidate who is most conversant on these issues is Elizabeth Warren, not Bernie Sanders.  And, as Mr. Jaffe notes, Big Tech understands this distinction:

Khanna’s eyes fixed on Steve Spinner, a big tech investor in Silicon Valley and major fundraiser for Obama’s 2008 and 2012 presidential campaigns. Spinner, who chaired Khanna’s congressional win, was listening [to Bernie Sanders’s speech] with his arms folded across his fleece vest.

“We dragged him out here,” Khanna said. “He’s about as far from Bernie as you can get.”

Many of Khanna’s billionaire supporters — even those who worried about capitalism and inequality — seemed genuinely puzzled by Khanna’s affection for Sanders.

For Khanna it was simple: In Sanders, Khanna found a candidate who shared his diagnosis of the country’s most vexing problems: inequality and the failures of unrestrained capitalism.

Sanders wasn’t a perfect match for Khanna. Sanders didn’t really understand the tech industry — though he wasn’t calling for the breakup of big tech companies like Warren and some other candidates. Warren’s proposal, if executed, would hurt companies in Khanna’s district and alienate some of his wealthiest backers.

The cognitive dissonance at this point in the article becomes overwhelming. The piece is largely about a certain degree of growing self-awareness among Silicon Valley billionaires that “the tech economy has somehow broken capitalism.” There’s some discussion of some futuristic problems that could emerge due to advances in artificial intelligence and robotics, but there’s very little discussion of market consolidation and monopoly pricing power. What’s breaking our country right now is not that no one can get work nor that work has become obsolete. The problem is that entrepreneurial opportunities are being strangled by platform monopolies and retail behemoths. Wealth is being consolidated at the top and in select regions because small businesses have no shot at competing with Amazon and Wal-Mart. Consumers are being nickel-and-dimed to death by new services they can’t live without and for which there are only a tiny handful of often-colluding providers. It’s really only small-business and small-town capitalism that is broken, and it’s primarily a result of refusing to enforce antitrust laws that are still technically on the books.

Elizabeth Warren understands this and she talks about it constantly. She’s the one proposing things that will get at the root of the problem. Yet, these billionaires see her as a much bigger threat than Bernie Sanders. That really doesn’t make much sense. Sanders would confiscate their wealth after they’ve earned it and then redistribute it. That’s too late in the game. The solution is to make it so many more people can use access to capital to get wealthy on their own. The billionaires actually seem to understand this until you begin talking about their companies.

The billionaires understand that there is a global backlash going on. They can see the rise of fascism, nationalism, and xenophobia. They know things are on a trajectory to get much worse, largely owing to their own products, research and obscene capture of the market for goods and services.  Elizabeth Warren is standing right in front of them, telling them what they must do, and they respond with fear.

If she were elected, she’d be their best shot a finding a savior. But they see her appeal as more of symptom of the problem.  Big Tech must be broken up for their own good, and that’s going to do a heck of a lot more than letting these trends continue with some tinkering around marginal tax rates to subsidize health care and education.

Ro Khanna is suffering from the same delusion.  He has some nice ideas but they really don’t amount to much more than fiddling while Rome burns.

Khanna described a December trip he organized to tiny Jefferson, Iowa, for a group of tech executives that included Microsoft’s chief technology officer and a LinkedIn co-founder. The executives donated to the community college’s scholarship fund and paid to equip its computer lab with the goal of training 25 to 35 students for software developer jobs, starting at $65,000 a year.

Khanna had made similar trips to West Virginia, Ohio and Kentucky. The total number of jobs these trips produced was small, and the pay wasn’t great. Still, Khanna believed they served a larger purpose. They proved that people in Silicon Valley cared about places like Jefferson, a rural town of only 4,200. They gave people hope that even the remotest parts of America could take part in the country’s tech revolution.

The next step, Khanna told the executives at the mansion in Cupertino, was a $100 million effort to build 50 technology institutes, similar to land-grant colleges, to train workers in left-behind parts of America. Khanna had already introduced a bill that he admitted was unlikely to pass. But that wasn’t really the point. “It sets a blueprint,” he said.

We don’t need billionaires to “prove” that they care about places like Jefferson, Iowa by giving them a computer lab. We need them to stop using their monopoly power to bleed the people of Jefferson, Iowa dry and prevent them from having any hope of profitably providing goods and services to their own community.  A few tech scholarships and some cheap or free tuition are not going to do anything beyond making billionaires feel like these people are ungrateful.

The only real positive news in Jaffe’s article is that it demonstrates that the billionaires in Silicon Valley understand that something is desperately wrong and they are looking for answers.  They see Trumpism as a tremendous threat rather than as a protector against a populist uprising. That’s good. If that changes, then we get fascism for real.