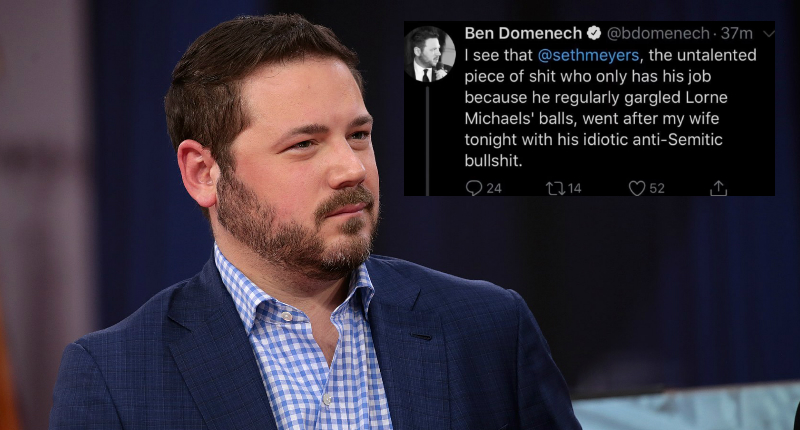 Maybe it’s hangover from doing media criticism for the past several years, but honestly what the hell is wrong with you Ben Domenech and Meghan McCain?

In a series of since-deleted tweets, Ben Domenech, the founder and publisher of conservative website The Federalist, went on an unhinged rant against the late-night host and former head writer for Saturday Night Live that was at times homophobic and at others suggested that he has only succeeded in comedy because he is a white man.

“I see that @sethmeyers, the untalented piece of shit who only has has job because he regularly gargled Lorne Michaels’ balls, went after my wife tonight with his idiotic anti-Semitic bullshit,” Domenech wrote.

This occurred after his wife, who is JOHN MCCAIN’S DAUGHTER just in case you were wondering, had a meltdown of her own that night on the Seth Meyers show. It starts around the 7:45 minute mark, when Meyers pressed her on her comments about Congresswoman Ilhan Omar (D-MN).

As you can see, she goes from zero to grievance in less than 30 seconds, jumping into how “unpopular” her view is with the audience and the viewers. After Meyers repeatedly fact-checks her on Omar’s apology for her comments about September 11, McCain accuses the host of being Omar’s “press person.” She gets angry when Meyers refuses to go along with equating President Donald Trump, who has a long and storied history of racism, with a freshman congresswoman’s almost off-the-cuff (and yes insensitive) remark. On and on it goes.

This, of course, is not new ground for McCain, who makes her living screaming at the top of her lungs on “The View,” where she sulks, openly nurses grievances, goes so far as to accuse the audience of hating her, and bickers backstage with her co-hosts. But knowing little about her husband Mr. Domenech, other than that he publishes a wretched magazine that in the service of partisanship defends pedophilia and which has also been accused of defending racism, I was surprised to see such an over-the-top, emotional outburst, chockful of the same grievances held by his wife.

I have to ask: what the hell is wrong with these people that they cannot deal with even the slightest disagreement? Seth Meyers -who by the way is married to a Jewish woman- respectfully disagrees with your wife about Ilhan Omar and you accuse him of “idiotic anti-Semitic bullshit” and then call him a “cuck”? That’s like going into a diner and beating the shit out of your waitress because she thinks you might prefer the meatloaf instead of the patty melt.

If this is the young future of the intellectual conservative movement -intemperate, presumptuous rich people who think they know more than they do- I will find it even more difficult to take their arguments seriously. The petty fetishing of nonexistent bugaboos and the lashing out at those who would question them doesn’t predict much of a lifespan. 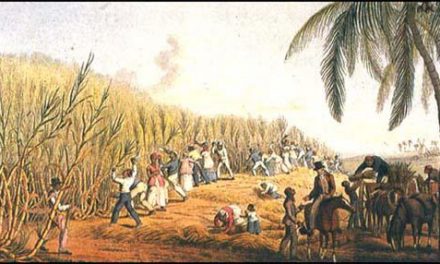 Trading Away our Food Safety

The next generation of the upper crust deplorables.