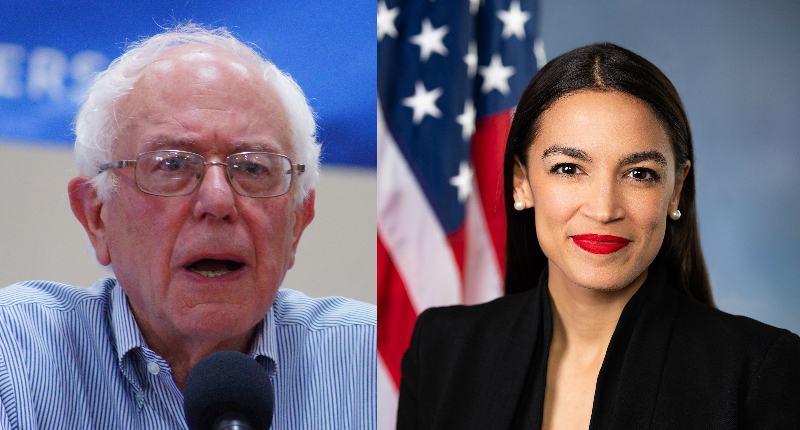 The Washington Post reports that presidential candidate Senator Bernie Sanders (D-VT) and Representative Alexandria Ocasio-Cortez have teamed up on legislation to cap the interest rates that credit cards can set:

In addition to a 15 percent federal cap on interest rates for credit cards and other consumer loans, states could establish their own lower limits under the legislation. It would also allow the U.S. Postal Service to get into the banking business, including offering savings and checking accounts.

The proposal is sure to meet stiff resistance from the banking industry, which brought in $113 billion in interest and fees from credit cards last year, up 35 percent since 2012, according to S&P Global Market Intelligence.

That should actually say it “It would also allow the U.S. Postal Service to get BACK into the banking business, but that’s a topic for another time.

Meanwhile, the banking industry is hopping mad. They’re making vague threats that the “proposal will only harm consumers,” but in reality? It’s a welcome return to sanity that is long overdue.

It’s been nearly 15 years since Democrats and Republicans teamed up to pass one of the worst anti-consumer laws ever conceived, and one I have been railing against since my earliest days as a blogger: Bankruptcy Abuse Prevention and Consumer Protection Act. Among the provisions:

One criticism of the law was that the law made the discharge of liability for medical bills more difficult.

A major target of the bill’s opponents were provisions they described as beneficial to credit card companies. In particular, critics objected to the extension to eight years from six to the time before which debtors could liquidate their debts through bankruptcy, and requirements that those who file for multiple bankruptcies pay previous credit card debt that would have been forgiven under the old law.

The bill’s opponents were especially critical of provisions that expanded exemptions to the discharge of credit card debt, forcing spouses owed alimony to compete more often with credit card companies and other lenders for their unpaid child support. More broadly the bill’s critics argued that the legislation did nothing to curtail what they characterize as predatory practices of credit card companies, such as exorbitant interest rates, rising and often hidden fees, and targeting minors and the recently bankrupt for new cards. The bill’s critics argue that these practices are themselves significant contributors to the growth of consumer bankruptcies.

Remember, this was back in the days before the Affordable Care Act, so if you got hit with medical bills this law could -and often did- destroy families who were already struggling.

Another nasty side effect of the Bankruptcy Reform Act was that when the shit hit the fan in 2007-2007, it forced people to choose between paying high interest credit card debt that they couldn’t discharge or walking away from things like, say, a mortgage. This unforeseen consequence was, in fact, a key factor in the collapse of Wachovia Bank in 2008:

“They never spent the time, the money or the energy to integrate all of the businesses,” said Meredith Whitney, analyst at Oppenheimer. “And so the credit card business speaks Mandarin while the mortgage business speaks Cantonese. It’s not a functional family. And because it’s not a functional family, it’s extraordinarily expensive to operate all the separate businesses, and you don’t get any of the advantages.”

Many of these problems were masked during the credit boom this decade. But with the financial crisis in full swing, the bank’s failure to unite its empire has become more exposed than ever.

In 2008 the American Bankruptcy Law Journal concluded that:

The legislative history of BAPCPA does not indicate any Congressional intent to hurt consumers in order to help credit card companies. Perhaps members of Congress made an honest mistake that they will now correct by changing the law. But it is also possible that legislators merely wished a positive impact on credit card profits.

The legislators, of course, never changed the law, which was co-sponsored by Democratic Senator Tom Carper of Delaware (headquarters to “half of the U.S. credit card market” and Republican Charles Grassley of Iowa, who also has deep ties with the banking industry.

Today Americans are used to throwing their money away on interest payments. I myself have been caught in that cycle of debt, and I’m sure you have been as well. It’s a horrible feeling.

Ocasio-Cortez and Sanders are to be applauded for their efforts to restore some sanity to the credit card industry, and for helping consumers dig themselves out of a hole that they never should have been in to begin with.

Thanks for providing the needed perspective. I have never forgotten that Biden (MBNA) was a leader in getting Bankruptcy bill passed.

As president, we should expect more of the same from Joe “middle ground” Biden.