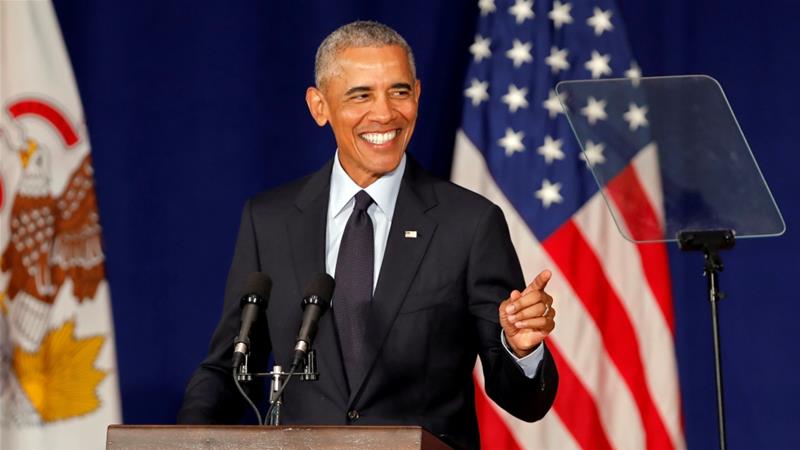 It seems that Edward-Isaac Dovere is intent on stirring up trouble. In his new piece in The Atlantic, Devere suggests that Barack Obama might intervene in the Democratic primaries, either to derail Bernie Sanders’ candidacy or to essentially serve as “The Decider” if there is a brokered convention:

Obama remains firm that he won’t endorse soon, while aides are stressing that he might get involved later in the process—presumably, the thinking goes, to stop a candidate he sees as too divisive or likely to lose from becoming the nominee. (This hasn’t been specified, but most assume it would be to stop Bernie Sanders.)

Obama and his aides have carefully guarded when and how to deploy him; some have even theorized he could be called on to broker who the 2020 nominee is, if the primaries finish without a clear winner and Democrats face a contested convention.

After asserting that Obama is “more popular than Jesus” among Democrats, Dovere delivers a turn of the screws to Joe Biden for evoking his name:

But to paraphrase a Biden joke from 2007, Biden’s 2020 campaign so far is almost a noun, a verb, and Barack Obama. Biden talks about his old boss in nearly every speech, using him as a validator, a shield from criticism, and a way of summoning nostalgia.

Left unsaid is why Biden wouldn’t take advantage of Obama’s popularity since it’s probably his biggest advantage over his opponents.

Dovere expends a lot of ink discussing Obama’s struggles to complete his memoir, and he’s fairly snide about it.

Of course, before any serious endorsement conversation can commence, Obama has to finish his book (between rounds of golf and raising millions for his foundation). The writing has been going more slowly than he’d expected, and according to several people who have spoken with him, the 44th president is feeling competitive with his wife, whose own book, Becoming, was the biggest release of 2018 and is on track to be the best-selling memoir in history. Speaking on the condition of anonymity, like others in this story, these sources note he’ll occasionally say in conversation that he’s writing this book himself, while Michelle used a ghostwriter.

You’d think that all the former president does is golf and beg for money, but on Thursday he paid a surprise visit to the Washington Nationals’ after-school baseball program and offered encouragement to the kids. Yet, Dovere is more focused on Obama’s luxurious lifestyle:

Obama’s research process has been intense and convoluted, and it’s still very much ongoing, from the legal pads he had shipped to Marlon Brando’s old island in French Polynesia, where he spent a month in March 2017, to the interviews that aides have been conducting with former members of his administration to jog and build out memories.

Setting the nasty and trollish tone of this piece aside, Obama is the most respected politician in America. Democratic voters want to know what he thinks and they will be influenced by any preferences he expresses about the 2020 nomination.  For this reason, he’s probably not going to say very much. He’d probably see a Biden presidency as beneficial to his legacy, which was tarnished when Clinton was unable to succeed him.  But I don’t think that’s his only consideration. He wants what is best for the country, and he’ll probably be fine with any candidate who can actually win.  He’s also loyal enough to Biden that he wouldn’t tell us even if he thought he wasn’t the best option.

His aides can speculate all they want about what he thinks about Bernie Sanders or any other candidate, but all it is is a guess. If there is no clear winner in the primaries, I suppose he might weigh in to help settle things at the convention, but that’s also mere conjecture at this point.  The man is keeping a low profile, writing a book, doing some good works, and trying to enjoy a well-earned retirement. I don’t see why it’s necessary to needle him with petty criticism or suggest that he intends to step in and stop any candidacy he doesn’t like.

Here’s what he told the kids at the baseball academy:

“If you work hard and listen to your coaches . . . I’m going be on the lookout for you,” Obama said. “You’re going to do something important. You’re going to make a real difference, and we’re going to be proud of you.”

You can tell a lot about a reporter by what they choose to emphasize. They can focus on a man’s competitiveness with his wife and the time he spent on Marlon Brando’s French Polynesian island, or they can write about his charitable endeavors and his outreach to troubled youth. They can report on his influence with Democrats or they can use anonymous sources to make a divisive figure who is a threat to certain candidates and their supporters.

Barack Obama is an asset to his party and to the country, and snarky and critical articles are not going to change that.

Message for the Midterms

Eh. Obama can weather snark and criticism. He’s one of Life’s Winners, he doesn’t need us to defend him. And I very much doubt that he thinks he’s done anything that would require defending. (I would’ve happily voted for him a third time, but I bet he’s like Comey in that he knows he did the best any human could’ve done in difficult circumstances, and the consequences were completely out of his hands. Maybe it’s even true!)

More important, how do I stay logged in to the new site? I keep getting kicked off.

I’ll add the getting logged out constantly to this list of things I discuss with my programmer this weekend.

That would be great. Would it also be possible to get the comments directly below each article rather than having to scroll past many “related posts” that go back years?

I get logged out about once every other day. No biggee.

Okay, about once a day. Distracting, but not annoying.

This has been a big point of discouragement for me in terms of posting more often, so thank you.

Yes, my verdict on the re-design is that while it may have served a number of Booman’s goals well, it was also decidedly user-unfriendly with respect to commenting. Frequent involuntary log-outs is one change for the worse. And I think this and those following below are reflected in a noticeable drop-off in commenting activity and reduction in size of the regularly-commenting Frogpond community. Another is the disappearance of a direct link to one’s own profile (and hence, comments — allowing a quick check for any replies or ratings) from the front page. (For all its annoying qualities, this is something… Read more »

I’m grateful for feedback like this. I’m unhappy with all the features you mentioned. And we obviously didn’t have users to beta test for most of the design period, so we’re kind of beta-testing it now. All of this feedback will be shared with the programmer.

Good to hear. One self-correction: since writing that, I noticed access to my own profile, comments, etc., is actually available on most (perhaps all?) pages here at the new site; I just have to scroll down very far (2/3 or so of the way to the bottom?) to find them, rather than them being conveniently always perched right there at the top of every page on the old site.

I think that the reason they’re now available is because you complained. So, good work.

Agree with you but I also agree with the ideas that Anand Giridharadas details in his book, “Winners Take All”. Those with a lot of power and wealth would do much better if they attacked the sources of inequality instead of doing foundations and charities (to build up good will from the public while they continue to represent the status quo). Think we can respect Obama and still do this.

And then there’s this response to Theresa May’s tearful announcement – . I think this illustrates an appropriate response to power.

Hey, glad you mentioned Anand Giridharadas’s book “Winners Take All” — I read it a few months ago. Everybody should read it, it’s a fantastic book about a huge but little understood problem. What he says is so important, and he says it so well and so clearly.

Booman, if you’re reading this: pbriggsiam inserted a link, but with your current setup highlighted hypertext is virtually indistinguishable from un-highlighted text. I only found it from the context and by dragging my cursor until the little hand appeared. Please try to fix this.

“Left unsaid is why Biden wouldn’t take advantage of Obama’s popularity since it’s probably his biggest advantage over his opponents.’

Right, but I think the point was that he doesn’t do very much more than that, or that he relies on it too much. It’s a unique advantage but it’s a somewhat hollow advantage because he’s not Obama or even very much like Obama.