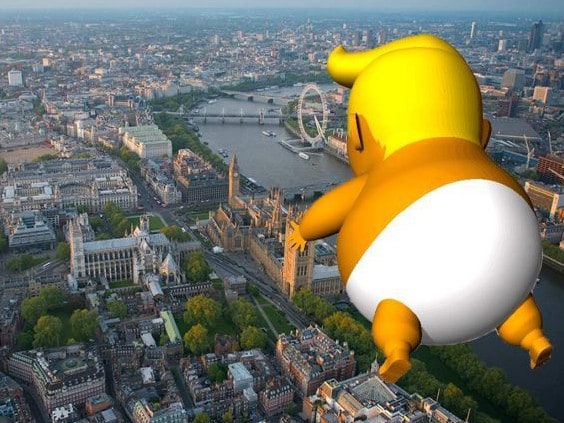 It’s not hard to see why the Washington Post is reporting that the United Kingdom seems like a reluctant host of our president. For one thing, thanks to the assent of London Mayor Sadiq Khan, that Baby Trump blimp is flying again.

Tomorrow, as Donald Trump proceeds with his state visit, I’ll be part of a team of people babysitting our Trump Baby blimp as he soars through the skies of London.

Last year Trump Baby joined 250,000 people on the streets of London with a further 150,000 people around the UK to protest his visit. Upon seeing the balloon, Trump said “I guess when they put out blimps to make me feel unwelcome, no reason for me to go to London”. That’s exactly the point.

We know Trump isn’t a joke – he is responsible for rampant xenophobia, sexism and transphobia and the creeping rise of far right politics. His climate denial and persistent facilitation of the fossil fuel industry is a death sentence for communities in the global south. But if flying a balloon caricature is what gets under his skin – then that’s exactly what we’re going to do.

Mayor Khan also criticized the decision to “lay out the red carpet” for Trump, which led the president to Tweet the following immediately after his plane landed in the United Kingdom:

.@SadiqKhan, who by all accounts has done a terrible job as Mayor of London, has been foolishly “nasty” to the visiting President of the United States, by far the most important ally of the United Kingdom. He is a stone cold loser who should focus on crime in London, not me……

Even before Trump’s plane landed in Essex, he was treated to a special surprise:

A student has attempted to catch the eye of Donald Trump by mowing an environmental message into grass under the flight path of Air Force One.

Ollie Nancarrow, 18, cut an image of a giant penis, a polar bear and a climate change message on his family’s land close to Stansted Airport, Essex.

The US president arrived at the airport on Monday morning for a three-day state visit to the UK.

The teenager wrote “Climate change is real”, as well as “Oi Trump”.

The British government also sent a few not-so-veiled messages. Trump won’t be staying at Buckingham Palace with the queen but will instead have to shack up with erstwhile owner of the New York Jets, Ambassador Woody Johnson, at the Winfield House. They have also denied Trump the traditional “royal welcome at the Horse Guards Parade and gold carriage procession down the Mall,” and he has not been invited to speak to Parliament.

After the invitation, House of Commons Speaker John Bercow said Trump would not be welcome to address lawmakers at the Palace of Westminster, as other presidents had done.

“Our opposition to racism and to sexism and our support for equality before the law and an independent judiciary are hugely important considerations in the House of Commons,” he said.

Dozens of other parliamentarians campaigned to have the invitation retracted, and a citizens’ petition collected 1.9 million signatures before it was closed.

As recently as this spring, there was an active campaign among MPs to force the government to uninvite Trump.

Royal biographer Robert Lacey put things in perspective: ““That’s the queen’s job, dealing with people whether she likes them or not…The queen has dealt with monsters in her time, from Idi Amin to Robert Mugabe, and this is an elected head of state of our most important ally and friend. This is her job.”

The Queen will be gracious, but not all of the Royal Family is following along.

During the three-day visit that begins Monday, Trump will meet with several senior royals — although not American royal Meghan, Duchess of Sussex, who gave birth last month. (She previously called Trump “misogynistic”; last week, he called her “nasty.”)

Officially, the American government denies that Trump called the Duchess of Sussex “nasty” and claims he was referring to her comments rather than her character.

This is the current condition of the Special Relationship between the United States and the United Kingdom.

Der Trumper really should stick to visiting authoritarian paradises like KSA and N Korea, where he can gush about the “wonderful” and “smart” dicta…er, leaders holding power there, and how much they “love their people”. And when, oh when, is Trumper’s triumphant state visit to genuflect before Puppetmaster Putin, the co-author (with one James Comey) of the catastrophic National Trumpalist regime? Now in Moscow Trumper will assuredly be met with the public displays of respect he thinks he is entitled to, however much Putin & Co. must be dying of laughter in private. Our vicious, boneheaded Trumper would also receive… Read more »

I hear you can remove tattoos, but it’s really expensive.