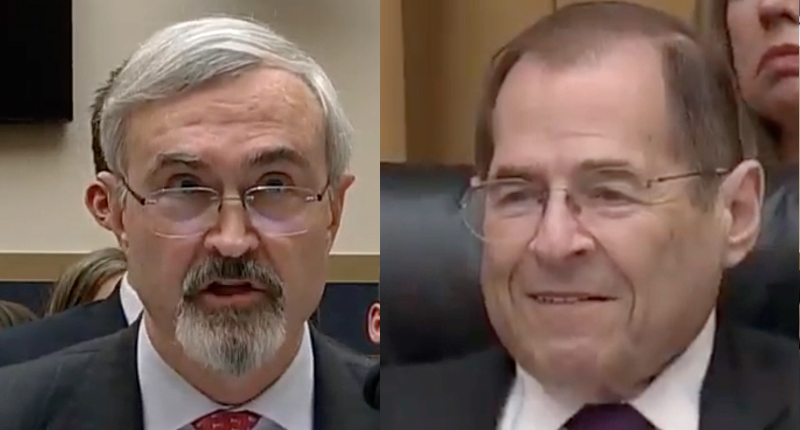 The Heritage Foundation’s John Malcom did just that on behalf of President Donald Trump in his opening statement before the House Judiciary Committee Monday afternoon. As you can see by the picture above, Chairman Jerry Nadler was unimpressed.

Malcolm defended Attorney General William Barr’s decision to exonerate Trump of obstruction of justice charges. I’m not a legal scholar myself, but there are plenty of ex-prosecutors who say Barr “is making things up and essentially not following the law.”

But Malcolm really began banging his fists on the table when it came to Trump’s motivations.

“In the overwhelming majority of cases, individuals who attempt to obstruct justice do so because they know darn well they committed a crime,” Malcolm said. “Moreover, it is almost invariably the case that someone trying to obstruct an investigation also engages in other nefarious activities, such as destroying evidence, suborning perjury, bribing witnesses, or threatening bodily harm.” He conveniently left out Trump’s alleged efforts to get Michael Cohen to lie for him. And his outright threats to Cohen’s family. And his attempt to influence Michael Flynn’s testimony. Malcolm also cited Trump’s “written testimony”, neglecting to mention that the president refused to have a sit down interview with special counsel Robert Mueller.

It was one sin of omission after another, and it was all wind up for the pitch.

“The president had perfectly legitimate reasons to be exasperated by the cloud hanging over his presidency from this investigation, and for wishing it to come to a speedy conclusion,” said Malcolm. “The investigation caused some to question the legitimacy of his election, because the allegations involved claims that high level people in his campaign engaged in a conspiracy with Russia to steal the election.”

“The president repeatedly expressed concerns that the investigation was hampering his ability to govern,” Malcolm went on, doing his best Nathan Thurm imitation, as if no president ever before had complained about investigations.”Such an alternative, non-corrupt motive other than naked self-interest might also explain his conduct.”

Malcolm played down Trump’s nonstop attacks on Mueller, the FBI’s leadership, his own attorney general Jeff Sessions, his deputy attorney general Rod Rosenstein, and everyone else in the presidential orbit as simple “criticism.” He added that “disentangling” Trump’s motives for firing those who refused to do his bidding, and his dangling of pardons before his [alleged] co-conspirators, would be so complicated as to hamper the president’s ability to do his job. This would raise “profound separation of issues,” and thus shouldn’t be undertaken by Congress.

In other words, Malcolm seemed to be arguing, if the president REALLY, REALLY, AND I MEAN REALLY REALLY FOR TRUE WITH SUGAR AND A CHERRY ON TOP thinks an investigation into his conduct is unfair and mean and exasperating, then his tampering with witnesses and clear obstruction don’t count. And even if they were based on corrupt motives, that’s not for Congress to decide.

Malcolm took pains to say that “no man, including the president of the United States, is above the law.” Presumably that means he’ll soon be calling for the release of every convicted criminal who REALLY, REALLY, AND I MEAN REALLY REALLY FOR TRUE WITH SUGAR AND A CHERRY ON TOP thinks the investigation into his or her conduct is unfair and mean and exasperating.

While I’m holding my breath for Malcolm to stand up on behalf of the justly and unjustly convicted, I have a question: is this what represents the finest legal minds of the conservative movement? Because that performance was so piss poor, even I could poke holes in his argument big enough to drive a tractor through, and I’m a total dipshit.

Yes, indeed, because Der Trumper did not (apparently) follow the full Mafia Obstruction of Justice playbook, he couldn’t have obstructed justice! QED. Flawlessly logical. The problem with these sort of “expert” hearings is that Repubs get to call their own absurd “experts” to pontificate, like this dishonest wingnut welfare Lifetime Recipient award-winner. The goal of his appearance is to waste time and provide something for Fox to cover. For these rest of America, it was all just inside baseball, since the corporate media “news” I saw literally didn’t air a word of whatever it was Dean was trying to say,… Read more »