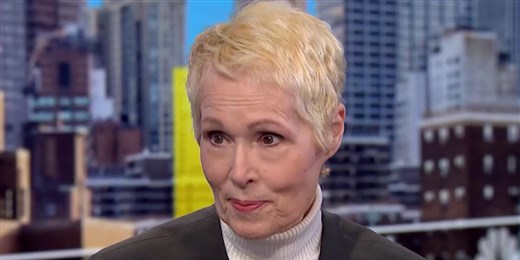 Somewhat surprisingly, at least for me, there are two Republican U.S. senators who think E. Jean Carroll’s allegations against Donald Trump should be investigated.

Sen. Joni Ernst of Iowa said both Trump and Carroll should be questioned about the alleged assault.

“I think anybody that makes an accusation like that, they should come forward,” Ernst said when asked if Carroll should be believed. “But obviously there has to be some additional information. They need to interview her. They need to visit with him.”

Sen. Mitt Romney of Utah said there needs to be an “evaluation” but that he didn’t know what entity should conduct it, “whether it’s Congress or whether it’s another setting, I’m not sure.”

“It’s a very serious allegation,” Romney said. “I hope that it is fully evaluated. The President said it didn’t happen and I certainly hope that’s the case.”

Neither of them defended Trump or suggested that the allegations were outrageous or unlikely to be true. CNN reporters attempted to get reactions from as many Republican senators as they could, and they got a variety of responses.

John Thune lent no more weight to Trump’s denials than Carrol’s version of the story:

The second-ranking senator in GOP leadership, Sen. John Thune of South Dakota, called the alleged acts “unacceptable, deplorable behavior” but said because “the President is denying them, I can’t comment on them because I don’t know what the truth is.”

Lindsey Graham drew a deep breath before taking the president’s word, but with a caveat:

When Sen. Lindsey Graham, a South Carolina Republican and ally of Trump’s was asked about the rape charges, he paused, took a deep breath and shook his head. Then he said, “He’s denied it, and that’s enough for me. Until somebody comes up with something new.”

Thom Tillis said he accepted Trump’s denial but tried to deflect the discussion to some false allegations that were lobbed at Supreme Court nominee Brett Kavanaugh. Even Tillis said he might change his mind if he sees new information.

Most senators opted to either give a “no comment” or lie and say that were not even aware of the story:

“I don’t have any comments on that,” said Senate Majority Leader Mitch McConnell when asked if it was appropriate for Trump to say the alleged victim wasn’t his type.

“I’m paying attention to (the National Defense Authorization Act), so I’m focused on getting that bill done,” said Sen. Deb Fischer, a Republican from Nebraska referencing the defense authorization bill that’s on the floor now.

“I don’t know what case you’re talking about,” said Sen. Marco Rubio, a Republican of Florida. “I’ve been reading about policy. You’re asking about a story that I’ve never even read.”

“I haven’t followed those. I don’t know anything about them,” said Senate HELP Committee Chairman Lamar Alexander, a Republican from Tennessee.

“I’m not going to comment,” said Sen. John Cornyn, a Republican of Texas.

“I have no comment on it,” said South Carolina GOP Sen. Tim Scott. “I haven’t taken the time to read anything about that yet.”

Not a one of them said that it was preposterous to allege that the president sexually assaulted a woman in department store changing room. Most people would call it rape, although Carroll refuses to characterize it that way. She calls it “a fight.”

President Clinton also faced allegations that he committed a sexual assault long before he became president. Juanita Broaddrick said she was attacked in 1978 in her hotel room. There was no way to arbitrate their dispute over what happened that day so the story did not get a ton of traction outside of right-wing media circles. But since Clinton’s reputation was for infidelity rather than assault, it didn’t fit a pattern. Democratic senators didn’t have difficulty saying they found the charges out of character for the president.

This time is much different. Even those who are willing to say they believe Trump’s denials do so tepidly and leave room to reverse themselves later. This is closer to the defenses we saw of Clinton from Democrats after the Lewinsky affair was reported but before the DNA from the blue dress confirmed it. The people who knew Clinton best knew that an allegation of infidelity was quite possibly true, and the people who know Trump best feel the same way about allegations of rape.

Pelosi Capitulates on Border Funding After Being Put in a Vise