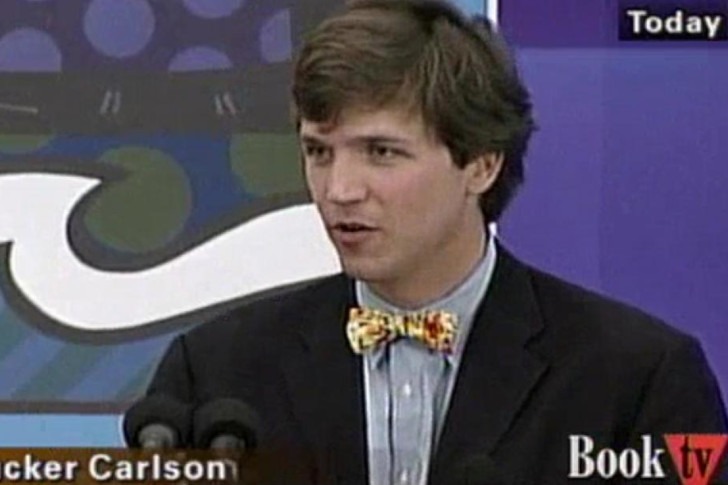 President Trump’s effort to be the mourner-in-chief on Wednesday has not been receiving glowing reviews. You might say that he “failed miserably.” He trips to El Paso and Dayton, Ohio weren’t just panned in the newspapers, but also on cable television. By Thursday morning, the president had lost his patience and went on another diatribe against the “fake news” on CNN and MSNBC.  Meanwhile, his strongest defender, Tucker Carlson of Fox News, announced he was going fishing with his son. Network executives insisted that the “vacation” had long been in the works.

As Oliver Darcy of CNN notes, there is a long tradition at Fox News of sending their embattled “talent” on vacation when they arouse too much controversy and threaten the network’s advertising revenue.

Carlson is the latest on the list, and there’s no telling yet whether he’ll come back refreshed and ready to stoke more racial hatred or be put out to permanent pasture like Bill O’Reilly.

The Fox News host has been insisting for quite some time both that the country is being overrun and fundamentally damaged by non-white immigration and that white supremacy is not a real threat. It has been trying a lot of people’s patience, but it reached a boiling point in the aftermath of the El Paso massacre when he tried to keep to the same schtick.

Fox’s Tucker Carlson is being roundly criticized for claiming that America’s white supremacy problem “is a hoax.”

It’s “just like the Russia hoax,” he told his viewers on Tuesday night. “It’s a conspiracy theory used to divide the country and keep a hold on power.”

This nonsensical claim came after several days of scrutiny of the El Paso suspect’s racist views and the forces that may have radicalized him. News outlets have pointed out that some of the anti-immigrant “invasion” language in the manifesto published online shortly before the attack mirrors what is frequently heard on far-right-wing talk shows and websites. And many prominent politicians have warned about the growing threat of white nationalist violence.

Carlson responded in a monologue on Tuesday night. He asserted that “the whole thing is a lie.” And he downplayed the threat by saying it’s “actually not a real problem in America. The combined membership of every white supremacist organization in this country would be able to fit inside a college football stadium.”

This immediately caused a social media storm and a reinvigorated effort to organize a boycott of any company that advertises on Carlson’s show. He announced his fishing expedition with his son one day later at the end of his Wednesday broadcast.

I don’t know when the tipping point will come, but we must be getting closer to the moment when the Republican Party and its media organs can no longer demonstrate the kind of silent complicity needed to keep Trump in his protective cocoon.

Has This All Been a Bad Dream?

Even leaving aside the daily doses of National Trumpalist hate speech against non-white immigrants, the facts on the ground in Gilroy, El Paso and Dayton condemn Der Trumper and his utterly failed administration. They ruthlessly cut back any FBI effort to keep tabs on white nationalist terrorism, and now the DHS is leaking that Der Trumper refused to countenance any effort to coordinate a strategy against domestic (i.e. white nationalist) terrorists. Just like Bushco dismantled all prioritizing efforts to combat al Qaeda that Clinton had put in place before 9/11. Der Trumper and Gruppenfuhrer Miller are supreme incompetents, making Bushco’s… Read more »

I don’t know when the tipping point will come, but we must be getting closer to the moment when the Republican Party and its media organs can no longer demonstrate the kind of silent complicity needed to keep Trump in his protective cocoon.

The tipping point will come when he’s no longer the Current Occupant, not before. Think back to Dubya. Total support from the party and the propaganda outfits. When he was out, you’d never know he existed.

They won’t have that luxury this time because his narcissism and the media’s genuflections will ensure he’s part of the conversation until he is dead.

George W. Bush enjoys neither royal nor religious status that would place him beyond criticism. Whether or not he is a real conservative, he is no friend of limited, constitutional government. And for that the American people should be very, very angry.

With an AG like this ,What so you expect? .what do you think about Martin? Scares me to death