The Scariest Thing Trump Said on the Ukraine Call 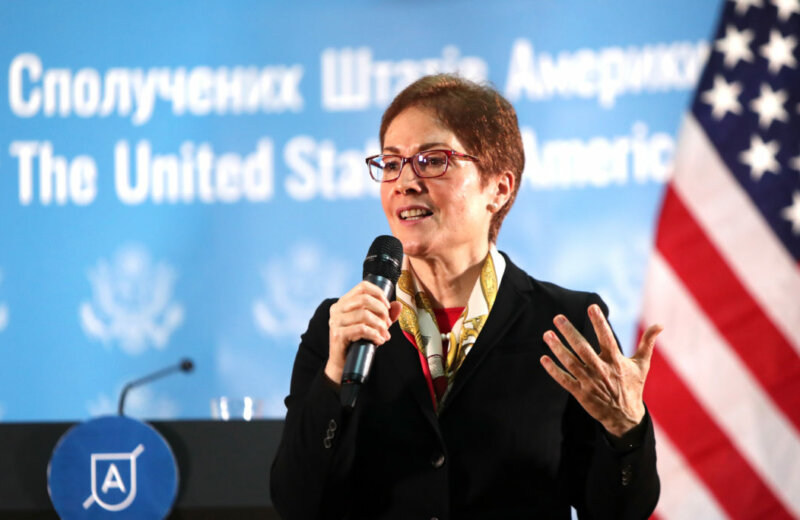 Image Credits: US Embassy in Ukraine.

After I learned that there was a whistleblower report pertaining to the president, I naturally wanted to know more. I became especially curious when I realized that it centered around a phone call Trump had in July with the president of Ukraine. When I finally saw a partially redacted transcript of the call, there were many things that caught my attention but only one thing that genuinely surprised me.

President Trump’s words about Marie L. Yovanovitch, his former ambassador to Ukraine, were ominous. In a telephone conversation that has set off a political crisis for Mr. Trump, he told Volodymyr Zelensky, the president of Ukraine, that she was “bad news.”

“She’s going to go through some things,” he added.

Those words–“she’s going to go through some things”– were what I’d expect to hear on the surreptitiously recorded conversations of an old school mob boss. The brash John Gotti might have said he had someone “whacked,” but the more traditional godfathers would just say, “you won’t hear from him again.”

Ms. Yovanovitch had already been recalled from her post in Kiev in May, two months before Trump suggested that she’d soon be having some problems. What more was the president planning to do to her?

Her name had already been dragged through the mud. First she was accused by Pete Sessions, now a former congressman from Texas, of privately saying disparaging things about the president to Ukrainian officials. In truth, Rudy Giuliani was orchestrating a coordinated attack on her. He seems to have enlisted not only Pete Sessions but also lawyer Joe diGenova, Donald Trump Jr. and the president himself. It’s likely that Giuliani was pulling the strings when former Ukrainian prosecutor Viktor Shokin claimed in an interview with The New York Times that “Ms. Yovanovitch had blocked his team from getting visas to the United States to deliver damaging information about Mr. Biden and his son Hunter to the F.B.I.”

Don Jr. called her a “joker.” Giuliani called her a “stooge”and suggested that she was a puppet for George Soros who was sponsoring anti-corruption efforts in Ukraine. Right-wing media outlets picked this up and  they argued that Viktor Shokin was an excellent prosecutor who had been wrongly forced out by Joe Biden to cover up alleged crimes committed by his son Hunter. In truth, Shokin was considered so corrupt in the West that the European Union also wanted to see him replaced. He had not been investigating the natural gas company Hunter Biden worked with for more than a year before he was removed by the Ukrainian parliament. There’s absolutely no truth to the suggestion that Ambassador Yovanovitch even had a motive to deny Shokin and his team visas to visit the United States.

On the July 25 phone call with Ukrainian president Volodymyr Zelensky, Donald Trump repeated a version of these theories, including the suggestion that Shokin had been an excellent prosecutor, “I heard you had a prosecutor who was very good and he was shut down and that is very unfair.” Trump is about the only person who believes that Shokin was a good prosecutor. Trump and Zelensky also discussed Ambassador Yovanovitch, agreeing that she was “bad.”

Zelensky had been prepped for this conversation, but again his source was Rudy Giuliani who did a conference call with one of his assistants, Andriy Yermak, prior to his conversation with President Trump.

By July 25, Ms. Yovanovitch had been “going through some things” for a while, but the president said more was coming. It’s been more than two months since he made that promise. I wonder how he’s gone about keeping it?

She’s working at Georgetown University now and refusing all press inquiries. While her recall from Ukraine was perceived as punitive by most people in the State Department, some believe that it was done at least in part for her own safety since she was under attack by the president, Giuliani and Ukrainians they had enlisted in their smear campaign.

She appears to have been collateral damage. She was caught up in a scheme to rehabilitate prosecutor Shokin in order to make it suspicious that Joe Biden wanted him removed. I hope she’s seen the worst of what the president can do to her, but I’m not so sure he’s done making her life miserable.

My Hunch On Saudi Arabia and the Islamic Nuclear Bomb

Well, this explains why they didn’t run the Ukrainian shakedown through the US embassy. I had been curious why the National Trumpalist courtiers didn’t apply the “favor” leverage via our von Ribbentrop, Herr Pompeo, and why they had the poor man’s Fuhrer be the one delivering the “nice country ya got there” message. Just for “plausible deniability” sake. I suppose our dope of a mob boss wanted to have the fun of making the pygmy country’s prez squirm. Such a “perfect” and “nice” call! Hopefully the ex-ambassador kept copies of everything and has already consulted counsel, because it seems clear… Read more »

And yet she remains silent. She was an ambassador for the Trump Administration. Now she is aware of why she was removed, and it was to commit a crime.

Yet she remains silent.

Hmmmm… call me late to the party, but is it possible someone suggested it would be wise if she kept her trap shut? Next step, grapefruit in the face, or maybe a nice cuppa tea?

We are beyond self. You either have ethics, or you don’t.

Her remaining silent, at this juncture, tells me all I need to know about her values.

I suppose the whistle blower should have shut up too,right? Let him keep on violating our laws and norms cause he would get mad? Something like that right?

Let’s hope the whistleblowers complaint has alleviated the threat to her. But once the gangsters get on you there are no guarantees.

I suspect they told Trump that she had embezzled funds:
https://thehill.com/hilltv/rising/434875-top-ukrainian-justice-official-says-us-ambassador-gave-him-a-do-not-prosecute
as implied in this article from March from The Hill (aka John Soloman) What jerks!