The Republican Defense of Trump Has Little Staying Power 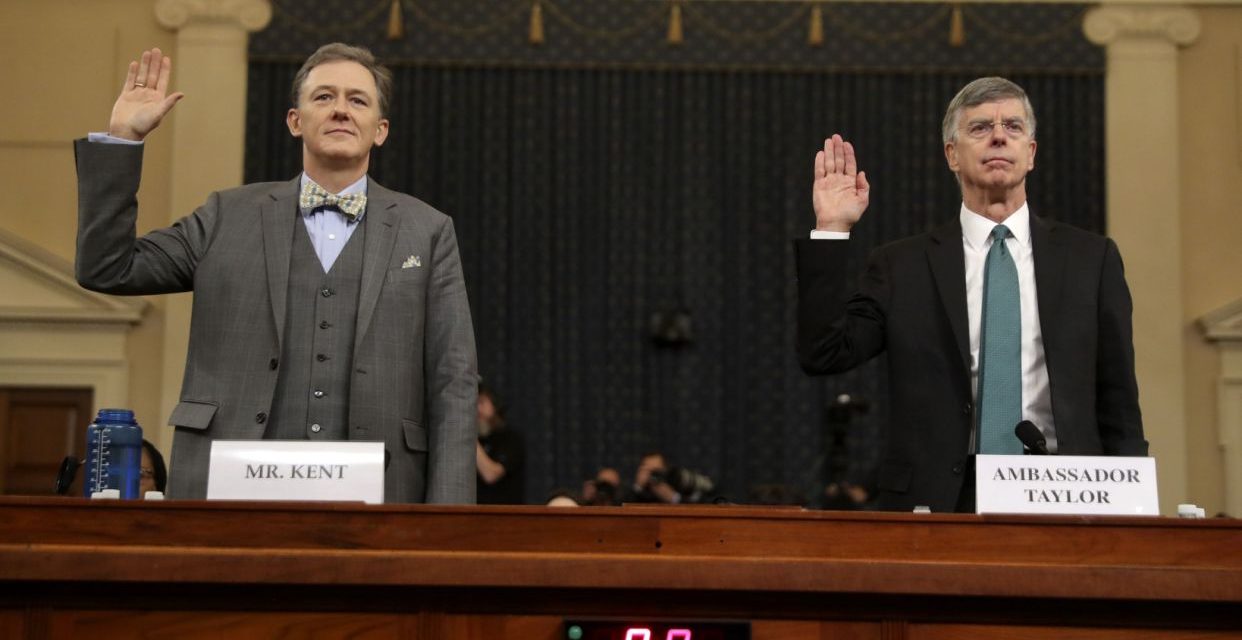 The Republicans had one advantage during the first formal day of the the impeachment hearings.They knew what weaknesses they were going to probe, while the Democrats’ responsibility was less to emphasize the strengths of their argument than to get the basic facts out on the table. But this is going to be a dwindling advantage.

The opening segment, during which Intelligence Committee chairman Adam Schiff and the Democratic staff attorney were allowed to extensively question Ambassador Bill Taylor and State Department official George Kent, went surprisingly well. Things were rougher once the Republicans got the opportunity to have their say.

Some of the defenses they introduced were particular to Wednesday’s witnesses and the limits of their knowledge, and some were more general and will have some staying power. The general outlines of their broad defense of the president became clear, and the Democrats weren’t necessarily prepared or even interested in rebutting them today. Some things can wait.

Witnesses Taylor and Kent were not the best witnesses to question or rebut these defenses. This is not some shortcoming of theirs, but rather just a product of their limited roles in this saga.

The Democrats will have plenty of time and the help of other witnesses to chip away at these four talking points. On the first point, it’s a somewhat useless defense for two main reasons. The first is that it doesn’t really matter what the Ukrainians understood to be full threat they were facing during the June 25 call. They were certainly aware that Trump wanted them to investigate the 2016 election and Joe and Hunter Biden if they wanted to be granted a White House visit. They knew this both prior to the call and because Trump articulated that demand during the call. As for the military aid, they didn’t know it was being held up but when Zelensky requested anti-tank javelin missiles, Trump said that he would need a favor fulfilled before granting releasing them. So, conditionality for at least that particular military component was established by Trump on the call.

On the second point, the effort to distinguish between withholding a White House visit and withholding military aid is not ultimately meaningful because both actions were wrong. But, in addition to that and as future witnesses will demonstrate, the Ukrainians did ultimately learn that military aid was being withheld conditioned on their agreement to investigated the 2016 elections and Joe and Hunter Biden, so it’s arbitrary to talk about the pressure the Ukrainians felt on July 25 and not the pressure they felt subsequent to that.

On the third point, virtually any moron can understand why President Zelensky does not want to contradict President Trump or take sides in the impeachment inquiry. He wants to maintain bipartisan American support for his country and he doesn’t want to look weak to how own people. I don’t think this really needs a lot of explanation, but the Democrats are sure to have witnesses discuss it as often as necessary.

On the fourth point, we will learn about how Congress received the whistleblower report and this led the administration to drop Trump’s demands and quickly release the aid.

On the first day, the Republican talking points were somewhat effective. But I believe the defense is really built on sand and will become less and less convincing.