Trump Should Have Been Impeached Over North Korea 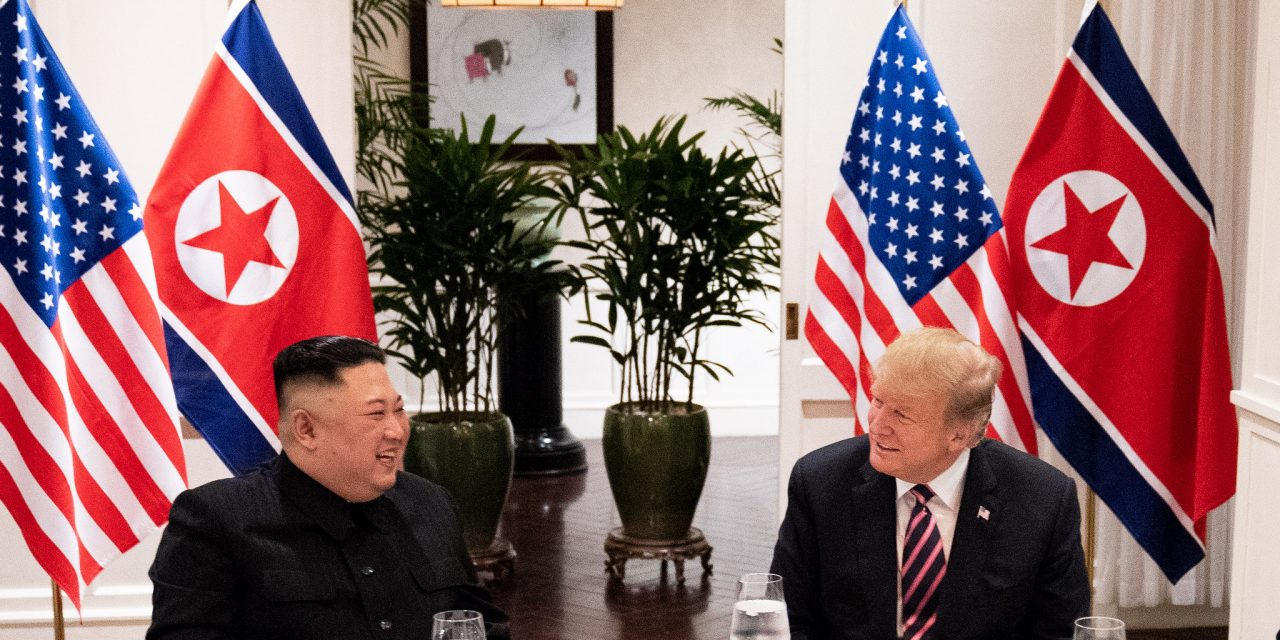 In an ideal world, a president would be removed from office if they demonstrated an obvious basic lack of competency for the job, even if they were not engaged in any unethical or criminal activities. President Trump will be impeached for contempt of Congress and abuse of power, but he ought to be retired for the simple reason that his foolishness and stupidity is a danger to the country and to all of humanity. This can be seen in excerpts from Peter Bergen’s new book, Trump and his Generals: The Cost of Chaos. Bergen describes an Oval Office meeting on North Korea in mid-April 2017 in which Trump was shown a coffee table-sized model of North Korea’s nuclear facilities during a briefing on the regional threat they pose.

Trump was also shown a satellite image of the Korean peninsula at night, showing the lights of China and South Korea and the blackness of North Korea in between. Trump initially mistook the void for an ocean. When he was shown the bright lights of Seoul just 30 miles south of the demilitarized zone separating the two Koreas, the president asked: “Why is Seoul so close to the North Korean border?”

Indeed, why is a city of 9.8 million people located where it is located? Why not pick it up like a campsite and move it to a safer area?

Trump had been repeatedly told that US freedom of action against North Korea was constrained by the fact that the regime’s artillery could demolish the South Korean capital in retaliation for any attack, inflicting mass casualties on its population of 25 million.

It’s hard to imagine a dumber reaction to this briefing. At the time, North Korea had been taking extremely provocative actions, including missile tests, and Trump was calling Kim Jong-un a “Rocket Man” and threatening his nation with annihilation.

“North Korea best not make any more threats to the United States,” Mr. Trump told reporters at his golf club in Bedminster, N.J., where he is spending much of the month on a working vacation. “They will be met with fire and fury like the world has never seen.”

Referring to North Korea’s volatile leader, Kim Jong-un, Mr. Trump said, “He has been very threatening beyond a normal state, and as I said, they will be met with fire and fury, and frankly power the likes of which this world has never seen before.”

The national security team was attempting to explain to Trump that his rhetoric was irresponsible and extremely dangerous, but he did not want to accept responsibility for what he had already done. It must be Seoul’s fault for foolishly establishing itself at its present location around the time Julius Caesar was crossing the Rubicon.  Trump’s instruction to relocate Seoul was ignored for obvious reasons, but he later acted impulsively again in a way that threatened economic disruption and even a nuclear war.

After watching a retired four-star general, Jack Keane, interviewed on Fox News in late January 2018, saying that US troops deployed to South Korea should not take their families with them, Bergen reports that Trump told his national security team: “I want an evacuation of American civilians from South Korea”.

A senior official warned that such an evacuation would be interpreted as a signal that the US was ready to go to war, and would crash the South Korean stock market, but Trump is reported to have ignored the warning, telling his team: “Go do it!”

Alarmed Pentagon officials ignored the order, and – according to Bergen – Trump eventually dropped the idea.

Ignoring Trump’s orders was a regular strategy for the Pentagon under the leadership of Defense Secretary James Mattis:

It was one of a number of occasions that the defense secretary at the time, James Mattis, ignored direction from the White House. He also refused to send defense department officials to a planned Korea war game at Camp David in the autumn of 2017, or to provide military options for intercepting North Korean ships suspected of sanctions busting.

It’s not acceptable for the Pentagon to ignore presidential direction or to defy direct orders, but any fair-minded person would admit that the alternative in many of these examples would have been worse. When the country and the world faces this kind of threat, the reasonable thing to do is to get the responsible people together and initiate a change of power. You can call it a “coup” if you want, but we have legal and constitutional provisions that include the 25th Amendment and the impeachment process for dealing with a president who cannot be trusted to carry out national security policy.  It’s not necessary for the military to seize power from the civilians, nor would that be preferable.

Ultimately, Trump is being impeached over his foreign policy with respect to Russia and Ukraine, but it was reckless to let him remain as president past the Spring of 2017. In was in May of 2017 that deputy attorney general Rod Rosenstein seriously raised the prospect of invoking the 25th Amendment to remove Trump from power.

The deputy attorney general, Rod J. Rosenstein, suggested last year that he secretly record President Trump in the White House to expose the chaos consuming the administration, and he discussed recruiting cabinet members to invoke the 25th Amendment to remove Mr. Trump from office for being unfit.

Mr. Rosenstein made these suggestions in the spring of 2017 when Mr. Trump’s firing of James B. Comey as F.B.I. director plunged the White House into turmoil. Over the ensuing days, the president divulged classified intelligence to Russians in the Oval Office, and revelations emerged that Mr. Trump had asked Mr. Comey to pledge loyalty and end an investigation into a senior aide.

Rosenstein was correct and drew the proper conclusions about Trump’s fitness for office. Unfortunately, nothing was done at that time and Trump continued to put our nation and our allies and all of humanity at risk.  This should alarm anyone because Trump and Kim Jong-un’s bromance is over and they’re back to where they began.

The North Korean leadership is threatening a resumption of missile tests, and a war of words between Trump and Kim Jong-un is simmering once more.

Trump has resurrected his nickname for Kim, “rocket man”. North Korea conducted a missile engine test at a site that it had previously mothballed, and on Monday a senior regime official called the US president a “heedless and erratic old man.”

It does not appear that Trump learns anything, ever, so you shouldn’t be surprised if he resurrects his desire to remove all American civilians from the Korean peninsula and to relocate Seoul to a safer location.

Ugly Face of a Syrian Massacre, Some Doubts Remain [Update]