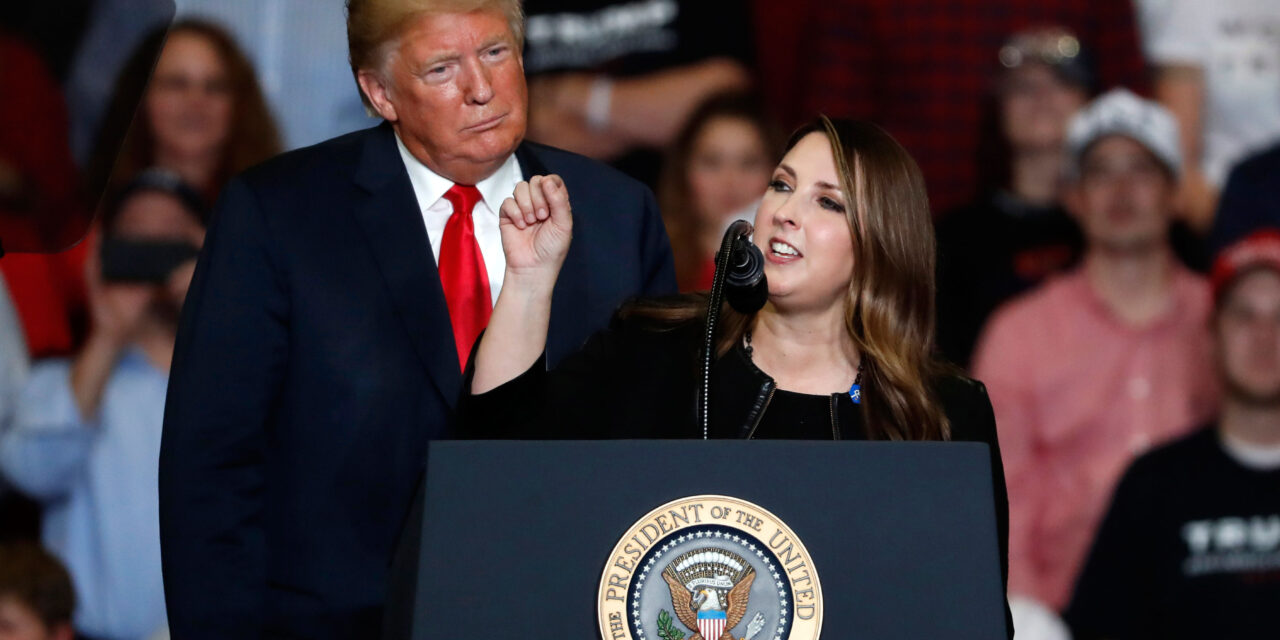 The first clue that RNC chair Ronna McDaniel isn’t serious about denouncing political violence is that she had her opinion piece published at Townhall.com rather than in a reputable newspaper. This allowed her to avoid even minimal fact checking.

So, let me start by providing an accurate portrayal of the key point of contention. Did the Republican Party say that the January 6 insurrectionists were engaged in “legitimate political discourse“? What was their justification for censuring Adam Kinzinger and Liz Cheney, the two Republican members of the congressional committee charged with investigation the January 6 coup attempt?

When the Republican Party voted to censure two of its own members of Congress last week at its winter meeting in Salt Lake City, it justified the move in part by declaring that efforts to investigate the Jan. 6, 2021, insurrection amounted to the persecution of individuals engaging in “legitimate political discourse.”

You can read the actual censure resolution here. It has a bunch of  “whereas” clauses, some of which seem to have nothing to do with Kinzinger and Cheney or the January 6 investigation. For example, “WHEREAS, The Biden Administration and Democrats in Congress have embarked on a systematic effort to replace liberty with socialism…”

But near the end we read this:

WHEREAS, Representatives Cheney and Kinzinger are participating in a Democrat-led persecution of ordinary citizens engaged in legitimate political discourse, and they are both utilizing their past professed political affiliation to mask Democrat abuse of prosecutorial power for partisan purposes,

This seems pretty straightforward. It’s an open-and-shut case. The RNC said that the investigation was persecuting ordinary citizens. It said these citizens had been engaged in “legitimate political discourse.”

But McDaniel says we’re reading this wrong. She says the “corporate news media” have provided “shameful, outrageous, and patently false coverage of the resolution adopted by the RNC.”

You see, the “ordinary citizens” referred to above are not the January 6 rioters. Instead, they’re people who weren’t even in Washington DC that day.

The January 6 Committee predictably has now vastly exceeded its original purpose and morphed into something else entirely, investigating Republicans who had nothing to do with January 6 for the apparent offense of being Republican. Under the Committee’s approach, almost anything related to the 2020 election is within the scope of its jurisdiction, to include harassing citizens who were not even in Washington, DC that day.

This is stupid for a variety of reasons including the rather obvious fact that the rioters didn’t show up at the Capitol out of thin air. They were encouraged to come. Any investigation seeking to understand what happened or to prevent a recurrence in the future must understand who is responsible for creating the riot and what they thought it could accomplish. Since the conspiracy to destroy democracy extends backwards in time and has no ties to any particular geographical location, it stands to reason that people will be questioned who did not storm the Capitol or whom may not have been anywhere near the Capitol that day.

For example, in several states there were fake Republican electors who created documents that could have been used to falsely certify Trump and Pence as the winners of the 2020 election. McDaniel sites these people as innocent examples of people who are being wrongly investigated and persecuted.

This includes individuals like one of the RNC’s members who was subpoenaed because, weeks before January 6th, she served as an alternate elector pending the outcome of ongoing lawsuits – an action with clear legal precedent which Democrats themselves have done in the past. Now she could face costly legal bills even though she was nowhere near the Capitol on January 6th and had nothing to do with the violence that occurred.

Presenting yourself as the elector of a winning candidate when you are in fact an elector for the losing candidate is not “discourse.” It’s an action. It’s a fraudulent action. And it’s not a matter of performing a legitimate action just in case your deranged and hopeless legal actions go your way.

CNN reported last week that the scheme was overseen by Trump campaign officials, led by Giuliani. This wasn’t something organic that just happened out of nowhere on the state level.

According to CNN’s reporting, there were multiple planning calls between Trump campaign officials and GOP state operatives, and Giuliani participated in at least one call. The Trump campaign lined up supporters to fill elector slots, secured meeting rooms for the fake electors to meet on December 14, 2020, and circulated drafts of fake certificates that they later signed…

…The fake electors in these states were pawns in a bigger plan — which Trump supported in public and private — to overturn the results of the 2020 election and steal a second term.

Because these fraudulent documents were sent to the National Archives as if they were legitimate, the participants and organizers could be guilty of “falsifying voting documents, mail fraud or potentially a conspiracy to defraud the United States.” But that’s for the Department of Justice and the federal courts to decide. The January 6 committee could make a criminal referral to the DOJ, but their mission is investigatory and legislative. They want to know what happened and they want to make recommendations to assure that nothing similar happens in the future.

In any case, McDaniel is arguing that the RNC condemns the violence committed on January 6 and does not view bear spraying Capitol Police officers as “legitimate political discourse.” Instead, she sees filing fake documents with the National Archives in an attempt to steal an election as legitimate.

That’s much of an improvement. In fact, it’s arguably worse.

Unsurprisingly, there are several other fact-challenged or misleading aspects in her opinion piece. One example is her suggestion that the insurrection has already been adequately investigated by the U.S. Senate.

The Senate has already completed one investigation into January 6th, and there are multiple ongoing active law enforcement investigations into what happened that day. These are the correct avenues for investigation.

In fact, the Senate investigation produced a report that was limited to looking at the “security, planning, and response failures” of that allowed the breach of the Capitol. It did not delve into the organization or purposes of the riot itself.

McDaniel also deceives about the makeup of the committee.

Republican leadership was not allowed to freely appoint a single Republican to the committee.  Instead, Cheney and Kinzinger were hand-picked by Nancy Pelosi.

Let’s look at what actually happened. In May 2021, the House reached an agreement with House Republican negotiators on the structure of an independent bipartisan investigation of the January 6 attacks despite House Minority Leader Kevin McCarthy’s insistence that the investigation include an examination of violence that occurred during the George Floyd protests in 2020. The lead Republican negotiator, Rep. John Katko of New York, who had voted to impeach President Trump over his role in the insurrection, announced the agreement on May 14 in a joint press conference with Democrat Bennie Thompson of Mississippi. Senate Minority Leader Mitch McConnell of Kentucky immediately promised to filibuster the agreement (which he ultimately did) and McCarthy started to back away.

McCarthy almost immediately sought to distance himself from the commission and was non-committal about offering his endorsement. Asked whether he had signed off on the deal, McCarthy was direct: “No, no, no,” he told reporters in the basement of the Capitol.

By the following Tuesday, top House Republicans were urging their colleagues to oppose the commission bill, with McCarthy positioned against an inquiry on the basis that its scope focused narrowly on the Capitol attack.

With the idea of a independent bipartisan commission dead, Speaker Nancy Pelosi announced that the House of Representatives would pursue its own investigation. McCarthy was instructed to make recommendations from members of his caucus to serve on the committee, and he submitted a list. Unfortunately, and quite intentionally, the list included some members who were suspected of being part of the coup plot, including Reps. Jim Jordan of Ohio and Jim Banks of Indiana. Since they would more properly be witnesses in the investigation than committee members, Pelosi rejected them. This caused McCarthy to pull all cooperation and appoint no one.

Two Republicans, Rep. Liz Cheney of Wyoming and Adam Kinzinger of Illinois, both of whom had voted to impeach Trump, were invited by Pelosi to serve, and both accepted.

So, when McDaniel says that “the Republican leadership was not allowed to freely appoint a single Republican to the committee,” that is simply false. Three of McCarthy’s picks, Rodney Davis of Illinois, Kelly Armstrong of North Dakota and freshman Troy Nehls of Texas, were accepted. In retrospect, Rep. Nehls should probably have been rejected along with Jordan and Banks, but he wasn’t.

Townhall.com is willing to publish these lies while ordinary newspapers would insist on corrections or at least more nuance. But there’s one part of McDaniels’ piece that is valuable.

Let me be abundantly clear: as Chairman of the RNC, I have repeatedly condemned the violence that occurred at the Capitol on January 6th and do so again today. On January 6, 2021 , the members of the RNC released a statement that read, “These violent scenes we have witnessed do not represent acts of patriotism, but an attack on our country and its founding principles.” I tweeted that the violence was “shameful” and condemned it in the strongest possible terms.

She condemns the violence of January 6 and she should be held to that. It wasn’t legitimate political discourse.

But she isn’t condemning the underlying plot to destroy democracy and she’s making dishonest delegitimizing the investigation into the plot. Her party is without excuses and completely off the rails. 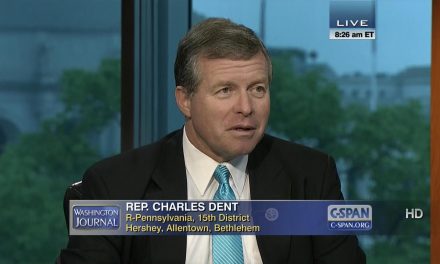 Despite Mitt Romney, Trump is Acquitted

Inside the Mind of an Iran War Hawk